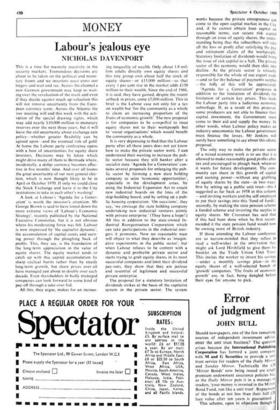 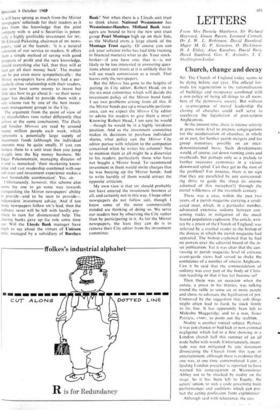 JOHN BULL Should newspapers, one of the few remaining sources of independent investment advice. enter the unit trust business? The question arises because the International Publishing Corporation has formed a joint company with M and G Securities to provide a unit trust service for readers of the Daily Mirror and Sunday Mirror. Technically the f20 'Mirror Bonds' now being issued are single premium endowment assurance policies but, as the Daily Mirror puts it in a message to readers, 'your money is invested in the Mirror Bond Fund, run like a unit trust'. Repayment of the bonds at not less than their full £20 face value after ten years is guaranteed.

This scheme, open to objection though

is. will have sprung as much from the Mirror newspapers' solicitude for their readers as it does from the knowledge that the joint company with M and o Securities is poten- tial') a highly profitable investment for IPC. !sfr Edward Pickering, chairman of IPC news- papers, said at the launch : 'it is a natural extension of our service to readers. It offers them a simple method of saving with good prospects of profit and the sure knowledge, should everything else fail, that they will at least get all their money back'. The matter can be put even more sympathetically : the Mirror newspapers have always had a par- ticularly close relationship with their readers, ssho now have some money to invest but little idea how to go about it—so their news- paper has decided to provide them with a safe scheme run by one of the best invest- ment management groups in the City.

The argument from the point of view of ipc shareholders runs rather differently (but arrives at the same conclusion). The Daily and Sunday Mirrors are read by around twenty million people each week, which represents a potentially large supply of investment funds (although the individual amounts may be quite small). If you can harness them to a unit trust then you jump straight into the big money business. Mr Edgar Palamountain, managing director of si and G. remarked: 'their marketing know- ledge and vast readership combined with our unit trust and investment experience makes a most formidable combination'. Yes, sir.

Unfortunately, however, this scheme also seems the one to go some way towards extinguishing the Mirror newspapers' ability to provide—and to be seen to provide— independent investment advice. And if too many newspapers follow tPc's lead, then the ordinary saver will be left with hardly any- where to turn for disinterested help. The clearing banks gave up the role some time ago. Will the Lloyds Bank manager have much to say about the virtues of Unicorn units. managed by a subsidiary of Barclays Bank? Not when there is a Lloyds unit trust to think about. National Westminster has Westminster-Hambro. Midland Bank man- agers are bound to have the new unit trust group Pearl Montagu high up on their lists, as the Midland owns a large chunk of the Montagu Trust equity. Of course you can ask your solicitor (who has had little training in financial matters) what to do. Your stock- broker—if you have one,, that is—is not likely to be too interested in answering ques- tions about unit trusts at it is unlikely that he will see much commission as a result. That leaves only the newspapers.

But the Mirror has gone to the lengths of putting its City editor, Robert Head, on to the six-man committee which will decide the investment policy of the Mirror bond fund. I see two problems arising from all this. If the Mirror bonds put up a miserable perform- ance, can we expect the Mirror City editor to advise his readers to give them a miss? Knowing Robert Head, I am sure he would —though he would be in a highly invidious position. And as the investment committee makes its decisions to purchase individual shares, what policy can the Mirror City editor pursue with relation to the companies concerned when he writes his column? Not to mention them at all might be a disservice to his readers, particularly those who have not bought a Mirror bond. To recommend investment in them would invite charges that he was buoying up the Mirror bonds. And to write harshly of them would attract the opposite criticism.

My own view is that 1PC should probably not have entered the investment business at all, and certainly not in this way. 1 hope other newspapers do not follow suit, though I know some of the more commercially minded are thinking of doing so. We serve our readers best by observing the City rather than by participating in it. As for the Mirror newspapers, the least they can do is to remove their City editor from the investment committee.