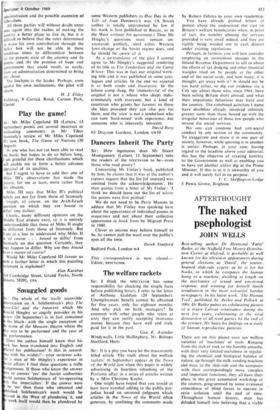 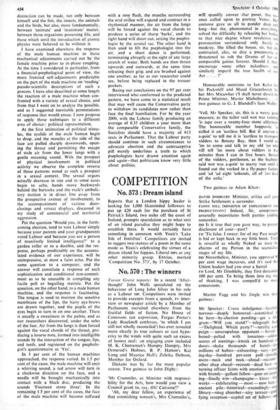 Best-selling author Dr Desmond 'Fatty' Butler, of the Nuffield Free Money Distribu- tion Centre at Oxford, is probably as well known for his television appearances during general elections as 'David', the scatter- brained slide-rule expert, as he is for his books, in which he compares the human being to a machine, dwelling at length on the mechanics of sexual and emotional response, and winning for himself lavish serialisation in the more colourful Sunday newspapers. In his latest work, 'The Human Tool', published by Accles and Pollock at 300s, Dr Butler paints an exhilarating picture of a major Labour renaissance during the next few years, culminating in the total destruction of all rival parties by the end of the century. He bases his findings on a study of human reproductive patterns.

There are on this planet over ten million varieties of 'machines' or tools. Ranging from the slab of rock or the humble amoeba, with their very limited usefulness in regulat- ing the chemical and biological balance of nature, up through the milk-vending machine and man, to the slide-rule and the computer with their correspondingly more complex and important functions, they all have their place in the great automated workshop of the cosmos, programmed by some irrational coincidence of blind forces to operate in eerie isolation until the end of time. Throughout human history, man has deluded himself into believing that a viable distinction can be made, not only between himself and the fish, the insects, the animals and the birds, but also, more fundamentally, between 'animate' and 'inanimate' matter, between those organisms possessing life, and those which until the introduction of atomic physics were believed to be without it.

I have examined elsewhere the response of the male human machine to those mechanical adjustments carried out by the female machine prior to in-phase coupling. At the time I considered in particular, from a financial-psephological point of view, the more frenzied self-adjustments predictable on the part of the male machine on 'reading' pseudo-scientific descriptions of such a process. I have also described at some length the reaction of a male machine when con- fronted with a variety of sexual choice, and from that I went on to analyse the possible, and as I suggested inevitable permutations of response that would ensue. I now propose to apply those techniques to a different area of choice: political representation.

At the first intimation of political stimu- lus, the eyelids of the male human begin to drop, and the muscles at the side of the face are pulled sharply downwards, open- ing the throat and permitting the escape of stale air from the lower lungs with a gentle moaning sound. With the prospect of physical involvement in political activity we observe the complete reverse of those patterns noted at such a prospect in a sexual context. The sexual organs actually decrease in size and in some cases begin to ache, hands move backwards behind the buttocks and the male's ambula- tory motion is in direct line away from the prospective avenue of involvement, to the accompaniment of various door- closings and retreat displays, discussed in my study of commercial and territorial aggression.

Put the question 'Would you, in the forth- coming election, tend to vote Labour simply because your parents and your grandparents voted Labour and because you are a person of manifestly limited intelligence?' to a garden roller or to a dustbin, and the res- ponse, perhaps predictably on the accumu- lated evidence of. our experience, will be

m unimpressive, at most a faint echo. Put the same question to a computer, and the answer will constitute a response of such sophistication and conditional non-commit- ment as to be unusable in compiling any facile poll or beguiling statistic. Put the question, on the other hand, to a male human machine, and the response is fascinating. The tongue is used to moisten the sensitive membrane of the lips, the hairy eye-brows are drawn together, and the pupils of the eyes begin to turn in on one another. There is usually a sweatiness in the palms, and as our researchers discovered, under the soles of the feet. Air from the lungs is then forced against the vocal chords of the throat, pro- ducing a hoarse note, formed into intelligible sounds by the interaction of the tongue, lips, and teeth, and registered on the psepholo- gist's questionnaire as 'Yes'.

In 3 per cent of the human machines approached, the response varied. In 1.5 per cent of the cases, the male machine will emit a whirring sound, a red arrow will turn in a clockwise direction on the face, and a needle will be brought mechanically into contact with a black disc, producing the sounds 'Fourteen stone three'. In the remaining 1.5 per cent of the cases, the face of the male machine will become suffused with a rosy flush, the muscles surrounding the oral orifice will expand and contract in a rhythmical manner, the air from the lungs will be forced against the vocal chords to produce a series of sharp 'barks', and the right hand will shoot out, seizing the psepho- logist by the scrotal sac. The other hand is then used to lift the psephologist into the air, and a short dance is performed, terminating abruptly at the sight of any large stretch of water. Both hands are then thrust upwards and outwards, at the same time releasing their grip, and are brushed against one another, as far as our researcher could see, before being replaced in the trouser pockets. • Basing our conclusions on the 97 per cent interviewed who conformed to the predicted pattern, we have come to a statistical result that may well cause the Conservative party to withdraw its candidates now rather than face the final humiliation. For by the year 2000, with the Labour family producing an average of 6.35 children a year more than the comparable Conservative family, the Socialists should have a majority of 613 seats in Parliament. That the Labour party should continue in such circumstances to advocate abortion and the contraceptive pill merely underlines a truth to which psephologists have drawn attention again and again—that politicians know very little about politics.