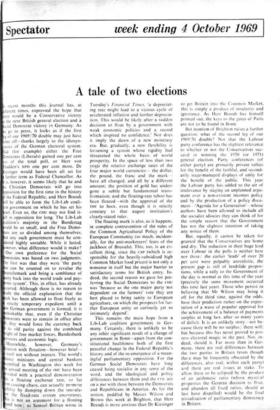 A tale of two elections

recent months this journal has, at fferent times, expressed the hope that ere would be a Conservative victory t the next British general election and a cial Democrat victory in Germany. As e go to press, it looks as if the first g of our 1969/70 double may just have ome off—thanks largely to the idiosyn- rasies of the German electoral system. ad (for example) either the Free emocrats (Liberals) gained one per cent ss of the total poll, or Herr von hadden's NPD one per cent more. Dr iesinger would have been all set for further term as Federal Chancellor. As is, however, it seems likely that he and is Christian Democrats will go into pposition for the first time in the history f the Federal Republic, and Herr Brandt ilI be able to form the Lib-Lab coali- on government on which he has set his art. Even so, the CDU may not find it- If in opposition for long. The Lib-Lab 'alition's majority in the Bundestag ould be so small, and the Free Demo- ats are so divided among themselves. at any such government must be con- dered highly unstable. While it lasted, owever, what difference would it make? Our own preference for the Social mocrats was based on two judgments. e first was that they were 'the party at can be counted on to revalue the utschemark and bring a semblance of nity back into the world trade and pay- ents system'. This, in effect, has already curred. Although there is no reason to 'ubt the official explanation that the ark has been allowed to float freely as strictly temporary expedient until a w German government is formed, it is thinkable that. even if the Christian emocrats were to remain in office after . they would force the currency back its old parity against the combined eight of free market forces. Bundesbank ensures and economic logic. Meanwhile, however, Germany's nation with flotation—however brief— itself not without interest. The world's ance ministers and central bankers embled in Washington this week for e annual meeting of the IMF have been 'vided with a practical demonstration at a floating exchange rate. so far In causing chaos, can actually promote Nay by damping down the specula- the fixed-rate system encouraees. s is not an argument for a floating and now: as Samuel Britian wrote in Tuesday's Financial Times, 'a depreciat- ing rate might lead to a vicious cycle of accelerated inflation and further deprecia- tion. This would be likely after a sudden decision to float by a government with weak economic policies and a record which inspired no confidence.' Nor does it imply the dawn of a new monetary era. But, gradually, a new flexibility is loosening a system whose rigidity had threatened the whole basis of world prosperity. In the space of less than two years the relative exchange rates of the four major world currencies— the dollar, the pound, the franc and the mark- - have all changed, and all by a different amount; the position of gold has under- gone a subtle but fundamental trans- formation; and the floating-rate taboo has been flouted—with the approval of the IMF to boot, even though it is strictly contrary to that august institution's clearly-stated rules.

The floating mark is also, as it happens, in complete contravention of the rules of the Common Agricultural Policy of the European Community (so much, incident- ally. for the anti-marketeers' fears of the jackboot of Brussels). This, too, is an ex- cellent thing, since the CAP (which is re- sponsible for the heavily-subsidised high Common Market food prices) is not only a nonsense in itself but the major barrier to satisfactory terms for British entry. In- deed, the second reason we gave for pre- ferring the Social Democrats to the mu was 'because as the one major party not dependent on the farmers' vote they are best placed to bring sanity to European agriculture, on which the prospects for fur- ther European unity so curiously yet so intimately depend'.

This remains the main hope from a Lib-Lab coalition government in Ger- many. Certainly, there is unlikely to be any other significant result of a change of government in Bonn—apart from the con- stitutional healthiness both of the first peaceful change in the Federal Republic's history and of the re-emergence of a mean- ingful parliamentary opposition. For the German Social Democrats have long ceased being socialist in any sense of the word, and the ideological and policy differences between them and the cou are on a par with those between the Democrats and Republicans in America. As for the notion, peddled by Messrs Wilson and Brown this week at Brighton. that Herr Brandt is more anxious than Dr Kiesinger to get Britain into the Common Market. this is simply a product of insularity and ignorance. As Herr Brandt has himself pointed out, the keys to the gates of Paris are not to be found in Bonn.

But mention of Brighton raises a further question: what of the second leg of our 1969/70 double? Not that the Labour party conference has the slightest relevance to whether or not the Conservatives suc- ceed in winning the 1970 (or 1971) general election. Party conferences (of either party) are primarily private -rallies for the benefit of the faithful, and second- arily stage-managed displays of unity for the benefit of the public. This year the Labour party has added to the air of irrelevance by staging an unplanned argu- ment over a non-existent incomes policy and by the production of a policy docu- ment—`Agenda for a Generation'—whose authors have been allowed to include all the socialist idiocies they can think of for the simple reason that the Government has not the slightest intention of taking any notice of them.

But. equally. it cannot be taken for granted that the Conservatives are home and dry. The reduction in their huge lead over Labour in the polls is neither here nor there : the earlier 'leads' of over 20 per cent were palpably unrealistic, the present gap is still of landslide propor- tions, while a rally to the Government of the day is normal at this time of the year (precisely the same movement occurred this time last year). Those who persist in believing that Mr Wilson may bring it off for the third time, against the odds, base their prediction rather on the expec- tation of a wave of popular approval for the achievement of a balance of payments surplus at long last, after so many years of deficit. It is an unlikely story—not be- cause there will be no surplus : there will: but because this has never proved to pos- sess electoral magic in the past. Nor, in- deed, should it. Far more than in Ger- many. there are real differences between the two parties in Britain (even though these may be frequently obscured by the differences, also real, within each party) and there are real issues at stake. To allow these to be eclipsed by the product of an arithmetic ratio (whose mystical properties the German decision to float. and abandon all fixed ratios, should at last have dispelled) would be the final trivialisation of parliamentary democracy in Britain.