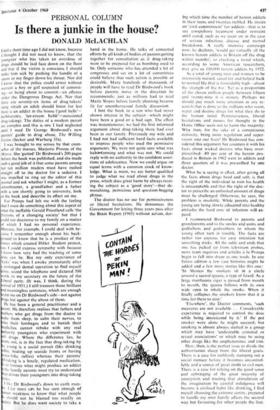 Is there a junkie in the house?

Until a short time ago I did not know, because I thought I did not need to know, that the youngster who has taken an overdose of drugs should be laid face down on the floor and that if the victim is conscious I should make hini sick by pushing the handle of a spoon or my finger down his throat. Nor did I know that the police could arrest without warrant a boy or girl suspected of commit- ing—or being about to commit—an offence under the Dangerous Drugs Act. Nor that there are seventy-six items of drug-takers' slang which an adult should listen for lest there is an addict in the house ('goof balls'= barbiturates, 'ice-cream habit'=occasional drug-taking). The duties of a modern parent are complex and this is one I had neglected until I read Dr George Birdwood's new parents' guide to drug abuse, The Willing Victim (Seeker and Warburg 35s).

1 was brought to my senses by that coun- sellor of the masses, Marjorie Proops of the Mirror. She 'gutted' Dr Birdwood's 200 pages before the book was published, and she made such a good job of it that some parents among her ten million readers must have rushed straight off to the doctor for a sedative. I was impelled to ring up the editor of this journal and ask whether I might, as a former schoolmaster, a grandfather and a father with a son shortly going to university, look at the book and describe its effect on me. For Proops had left me with the feeling that I must do something about this aspect of what the ineffable Gerald Priestland calls 'the frictions of a changing society' but that I ould not discourse to my family on a matter f which I had no personal experience. Marcuse, for example, I could deal with be- cause I remember enough about his back- round to know that he is a product of the orces which created Hitler. Student protest, oo, I could express sympathy with because know how very bad the teaching of some ions can be. But my only experience of kicks' was when I awoke prematurely after prolonged dental operation to find myself lone, seized the telephone and dictated 500 ords to my secretary on the future of the 'beral party: (It was, I think, during the evival of 1951.) I still treasure those brilliant nd meaningless sentences, which are enough o put me on Dr Birdwood's side—not against rugs but against the abuse of them.

He has been a general practitioner and a rent. He.therefore realises that fathers and others who get drugs from the doctor to ake them sleep, to calm their nerves, to lax their lumbagos and to banish their eadaches cannot rebuke with any real thority youngsters who experiment with ft drugs. Where the difference lies, he ints out, is in the fact that drug-taking by young is a social pursuit (like drinking flee, beating up seaside fronts or having • tor-bike rallies) whereas their parents' 11-taking is a lonely, regulated medication. to foresee what might produce an addict the family parents must try to understand at drives their youngsters into drug-taking roles.

I like Dr Birdwood's down to earth man- r. Like most GPS he has seen enough of man weakness to know that what people should not be blamed too readily on ietY. But he does want society to take a

hand in the home. He talks of concerted efforts-by all kinds of bodies,of parents getting together for consultation as if drug-taking were to be prepared for as bombing used to be. Only someone who has attended a lot of congresses and sat on a lot of committees could believe that such action is possible or desirable. Many hundreds of thousands of _ people will have to read Dr Birdwood's book before parents move in the direction he recommends; just as millions had to read Marie Stopes before family planning became fit for unembarrassed family discussion.

I lent the book to a son who had never shown interest in the subject—which might have been a good or a bad sign. The effect was instantaneous: we had the first informed argument about drug-taking there had ever been in our family. Previously my wife and I had not had sufficient hard facts available to impress people who used the permissive arguments. We were not quite sure what was habit■forming and what was not. We could reply with no authority to the confident asser- tions of adolescence. Now we could argue on equal terms with a common stock of know- ledge. What is more, we are better qualified to judge what we read about drugs in the press, which does great harm by always treat- ing the subject as a 'good story'—that de- moralising, pernicious and question-begging phrase.

The doctor has no use for permissiveness or liberal hesitations. He denounces the Government for letting three years pass after the Brain Report (1965) without action, dur- ing which time the number of heroin addicts in their teens and twenties trebled. He insists on 'civil commitment' for addicts—that is to say compulsory treatment under restraint until cured, such as we insist on in the case of serious infectious disease and mental breakdown. A really intensive campaign now, he declares, 'would get virtually all the known heroin addicts in Britain off the drug within months', so checking a trend which, according to some American researchers, may give us 110,000 heroin addicts by 1972.

As a total of young men and women to be intensively nursed, cared for and helped back to normal life that is formidably high—about the strength of the itAr. Yet as a proportion of the eleven million people between fifteen and twenty-nine it is minute. Perhaps we should pay much more attention in any re- search that is done to the millions who resist, reject and despise drugs for what they do to the human mind. Permissiveness, liberal hesitations and pauses for thought in the Home Office seem not to harm the majority. Why then, for the sake of a conspicuous minority, bring more regulation and super- vision into our lives? Dr Birdwood has con- sidered this argument but counters it with his facts about wicked doctors who have over- prescribed-80 per cent of the heroin pro- duced in Britain in 1962 went to addicts and three quarters of it was prescribed by one doctor.

What he is saying in effect, after giving all the facts about drugs hard and soft, is that the right of the individual to ruin his health is unacceptable and that the right of the doc- tor to prescribe an unlimited amount of drugs must be challenged. Otherwise, he says, the problem is insoluble. While parents and the young are being slowly educated into healthy attitudes the hard core of infection wit) ex- pand.

I recommend Birdwood to parents and grandparents and to the uncles and aunts and godfathers and godmothers to whom the young often turn in trouble. The facts are rather too copious for easy retention but something sticks. All the odds and ends that one has picked up from television probes, news team inquiries and articles a la Proops begin to fall into shape as one reads. In any future edition a few case histories might be added and a few more stories like this one: 'In Mexico the smokers sit in a circle around a sacred iguana, a type of lizard. As a large marihuana cigar is passed from mouth to mouth, the iguana follows with its own wide open to inhale the smoke. When it finally collapses the smokers know that it is time for them to stop.'

'Elsewhere', the Doctor comments. 'such measures are not available ... Considerable experience is required to control the dose while being intoxicated by it.' If the pot smoker were alone he might succeed; but smoking is almost always started in a group which may have 'undesirable criminal or sexual associations' or which may be using other drugs like the amphetamines and LSD.

Here, then, is the perfect issue to divide the authoritarian sheep from the liberal. goats. There is a case for ruthlessly stamping out a social menace before it becomes uncontrol- lable and a source of great profit to evil men. There is a case for relying on the good sense and upbringing of the great majority of youngsters and trusting that stimulation of the imagination by careful indulgence will become a civilised habit like drinking, I find myself choosing the extreme centre, prepared to handle my own family affairs the second way but favouring for other people the first.