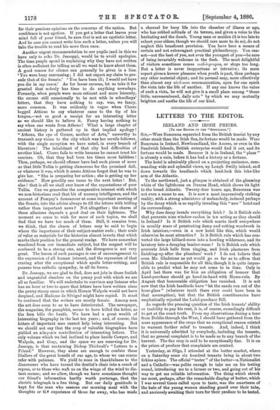 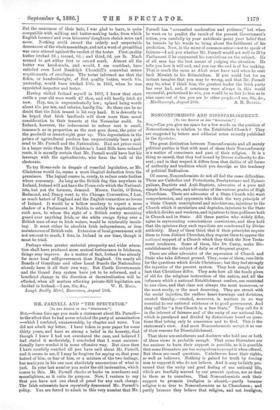 [To TIM EDITOR OF TEE " SPECTATOR:1

Sia,—Were Buncrana separated from the British tourist by any other strait than the Irish Sea, its fortune would be made. Were Buncrana in Iceland, Newfoundland, the Azores, or even in the Sandwich Islands, British enterprise would find it out, and its fortune would be made. Because it is in Ireland, the " place ' is already a ruin, before it has had a history or a fortune.

The hotel is admirably placed on a projecting eminence, com- manding wide and splendid views, up Lough Swilly inland, and down towards the headlands which land-lock this lake-like arm of the Atlantic.

To the northward, just a glimpse is obtained of the gleaming white of the lighthouse on Dunree Head, which shows its light to the broad Atlantic. Twenty-four hours ago, Buncrana was not even a name to me. It is now a most impressively striking reality, with a strong admixture of melancholy, induced perhaps by the decay which is so rapidly invading this " new " hotel and its surroundings.

Why does decay invade everything Irish ? Is it British rule- that prevents nine window-sashes in ten acting as they should in Ireland? Is it British rule which marks itself everywhere in mouldy scars of penetrating damp and rotting woodwork in Irish interiors,—even in a new hotel like this, which would otherwise be most attractive ? Is it British rule which has con- verted the large billiard-room into a howling wilderness, and its lavatory into a decaying lumber-room ? Is it British rule which prevents Irish bells from ringing, and Irish plasterers from finishing-up after the plumbers' work ? I do not believe that even Mr. Gladstone as yet would go so far as to affirm that British rule is responsible for all this, though it is quite impos- sible to predict what he may not come to in time. Only in April last there was for him an obligation of honour that Land-purchase should go hand-in-hand with Home-rule. By August that honourable obligation has vanished. It is not now that the Irish landlords have "let the sands run out of the hour-glass" (whatever truth there ever could, have been in that assumption), but that the British constituencies have emphatically rejected the Lelia-purchase Bill.

As regards the pressing question of the Irish tenants' ability or inability to pay his rent, it is, of course, exceedingly difficult to get at the exact truth. From my observations during a tour- from Dublin through the West, I should have gathered from the mere appearance of the crops that no exceptional reason existed to warrant further relief to tenants. And, indeed, I think it is universally admitted by everybody, including the tenants,. that no general complaint is to be made as to any branch of the harvest. The flax crop is said to be exceptionally fine. It is on the prices of produce that complaints are centred.

Yesterday, at Sligo, I attended at the butter market, where on a Saturday some six hundred tenants bring in about two. firkins apiece. The official " tester " of the butter—a Nationalist and a Catholic—was polite enough to take me on his testing round, introducing me to a farmer or two, and going out of his way to get me reliable information. The thing which struck me most, perhaps, after the remarkable display of butter, which I was several times called upon to taste, was the smartness of the hats of the young women standing guard over their tubs, and anxiously awaiting their turn for their produce to be tested. But the smartness of their hats, I was glad to learn, is quite compatible with milking and butter-making tasks, from which English farmers' and even labourers' daughters shrink more and snore. Nothing could exceed the orderly and respectable demeanour of the whole assemblage, and not a word of grumbling was once uttered against the verdict of the tester. First quality butter fetched Pd.; second, 8d. ; and third, 6d. per lb. Much seemed to get either first or second mark. Almost all the batter was hand-made, and would, I am confident, have satisfied even Lord Randolph Churchill's somewhat severe requirements of excellence. The tester informed me that the firkin, or hundredweight, of first quality butter, worth 84s. yesterday, would have fetched 136s. in 1883, when he was appointed inspector and tester.

Having visited Ireland myself in 1883, I know that store cattle a year old were worth £7 then, and will hardly fetch £4 now. Hay, too, is unprecedentedly low ; upland being worth about 458. per ton, and inferior, hardly 30s. So there can be no -doubt that the Irish tenant is hit very hard. It is devoutly to be hoped that Irish landlords will show more than usual consideration to their tenants at the November audit. In Ireland, however, the inducement to reduce rent is small, inasmuch as in proportion as the rent goes down, the price of the goodwill or tenant-right goes up. This depreciation in the prices of agricultural produce has unquestionably been a god- send to Mr. Parnell and the Nationalists. Had not prices sunk in a larger ratio than Mr. Gladstone's Land Bills have reduced rents, it is morally certain that Mr. Parnell would have lost his leverage with the agricultuxists, who form the bulk of the -electorate.

To try Home-rule in despair of remedial legislation, as Mr. -Gladstone would do, seems a most illogical deduction from the premisses. The logical course is, surely, to reduce rents further where necessary. As long as the British flag flies anywhere in Ireland, Ireland will not have the Home-rule which the National- ists, but not the farmers, demand. Messrs. Davitt, O'Brien, Redmond, and Deasy went to the Chicago Convention, I fear, as much haters of England and the English connection as lovers -of Ireland. It would be a hollow mockery to expect a mere shadow of a Parliament in Dublin to satisfy the aspirations of such men, to whom the sight of a British sentry mounting guard over anything Irish, or the white ensign flying over a British man-of-war in Irish waters, would be intolerably insult- ing. It must either be absolute Irish independence, or firm 'maintenance of British rule. Extension of local government will not amount to much, I fear, in Ireland in our time, though it must be tried.

Perhaps when greater material prosperity and w' ider educa- tion shall have produced more mutual forbearance in Irishmen, things may improve. As a matter of fact, Ireland has already far more local self-government than England. On nearly all Boards of Guardians and other Local Boards the Nationalists already have it all their own way. But Castle Governments and the Grand Jury system have yet to be reformed, and a beneficial change in the direction of decentralisation will be effected, when all matters affecting private-Bill legislation are