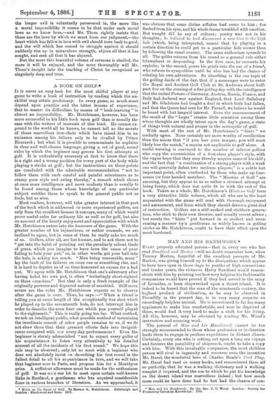 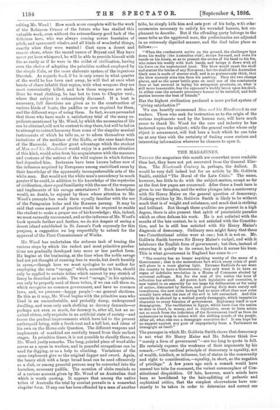 Page 19, 4 September 1886 — MAN AND HIS HANDIWORK.* EVERY properly educated person—that is, every
Close

MAN AND HIS HANDIWORK.* EVERY properly educated person—that is, every

one who has read Sandford and Merton—will no doubt remember how, when Tommy Merton, forgetful of the excellent precepts of Mr. Barlow, was giving himself up to the dissipations which appear to have been open in those days to youths of high connections and teuder years, the virtuous Harry Sandford wou:d remon- strate with him by pointing out how very helpless his fashionable companions wculd have proved if they had served in the army of Leonidas, or been shipwrecked upon a desert island. It is indeed to be feared that the man of the nineteenth century, the highest product of civilisation, as he may be observed in Piccadilly in the present day, is in very many respects an exceedingly helpless animal. He is accustomed to far too many appliances to make him comfortable, and were he deprived of these, would find it very hard to make a shift for his living. All this, however, may be obviated by reading dr. Wood's instructive and amusing work.

The perusal of Man and his Handiwork cannot be too strongly recommended to those whose profession or inclination leads them to engage in perilous expeditions in distant climes.- Certainly, every one who is setting out upon a long sea voyage and foresees the possibility of shipwreck, ought to-take a copy with him. With this invaluable c3mpanion, the most shiftless person will rival in ingenuity and resource even the inventive Mr. Hazel, the wonderful hero of Charles Reade's Foul Play. Mr. Novel had read so many books, and remembered them all so perfectly, that he was a walking dictionary and a walking essayist if required, and the use to which be put his knowledge on the desert island was marvellous indeed ; but how much more could he have done had he but had the chance of con- • Man and his Handiwork. By the Rev. J. G. Wood. Loudon Society for Promoting Christian Knowledge. 13:43, eulting Mr. Wood ! How much more complete will be the work of the Robinson Crasoe of the future who has studied this valuable work, even without the extraordinary good lack of the ficticious hero, who was always coming across fountains of pitch, and spermaceti whales, and all kinds of wonderful things, exactly when they were wanted ! Cast upon a desert and remote shore, where the sacred names of Bryant and May have never yet been whispered, he will be able to provide himself with -fire as easily as if he were in the midst of civilisation, having even the choice of adopting the primitive method employed by the simple Zulu, or the more elaborate system of the ingenious Dacotah. As regards food, if he is only aware in what quarter of the world he has been cast away, he will find at once what beasts of chase inhabit that region, with what weapons they are most conveniently killed, and how these weapons are made. Does he want clothing, he has but to turn to Chapter xxxi., where that subject is exhaustively discussed. If a boat is necessary, full directions are given as to the construction of various kinds of boats, the paddles or oars required for them, and the different ways of using them. In fact, we are persuaded that those who have made a satisfactory trial of the many ex- pedients mentioned by Mr. Wood, by which the necessaries of life can be obtained,will not be content to stop there, but will be led on to attempt to extract harmony from some of the singular musical instruments of which he tells us, or to adorn themselves with imitations of the necklace of the Kaffir, or the cane head-dress of the Macoushi. Another great advantage which the student of Man and his Handiwork would enjoy in a perilous situation of this kind, would arise from his acquaintance with the manners and customs of the natives of the wild regions in which fortune had deposited him. Instances have been known before now of the influence acquired by Europeans among uncivilised races by their knowledge of the apparently incomprehensible arts of the white man. But would not the white man's ascendency be much greater if he could, in addition to his knowledge of the mysteries of civilisation, show equal familiarity with the use of the weapons and implements of his savage entertainers P Such knowledge would, no doubt, be enjoyed by those whose attention to Mr. Wood's precepts has made them equally familiar with the use of the Patagonian bolas and the Bornean parang. It may be said that some amount of practice would be required to enable the student to make a proper use of his knowledge; this, indeed, we most earnestly recommend, and as the influence of Mr. Wood's book spreads farther and farther, we do riot despair of seeing a desert island established in St. James's Park expressly for this purpose, a suggestion we beg respectfully to submit for the approval of the First Commissioner of Works.

Mr. Wood has undertaken the arduous task of tracing the various steps by which the rudest and most primitive produc- tions are gradually developed into more or less perfect form. He begins at the beginning, at the time when the noble savage had not yet thought of running free in woods, but dwelt humbly in caves,—though here we must apologise to our author for employing the term "savage," which, according to him, should only be applied to certain tribes which cannot by any stretch of fancy be described as noble. The word "savage," in his opinion, can only be properly used of those tribes, if we can call them so, which recognise no common government, and have no common laws, and, we presume—happy people !—no general elections. Be this as it may, Mr. Wood begins with the primitive man who lived in an uncomfortable, and probably damp, underground dwelling, and wore only such clothing as decency demands—or perhaps not even so much, for decency is, after all, but an ac- quired virtue, only requisite in an artificial state of society—and traces the gradual improvements which have led to the present anthropoid being, with a frock-coat and a tall hat, and ideas of his own on the Home-rule Question. The different weapons and implements of mankind are carefully traced from their earliest stages. In primitive times, it is not possible to classify these, as Mr. Wood justly remarks. The long, pointed piece of wood alike serves as a spear in warfare, and in peaceful occupations can be used for digging, or as a help to climbing. Variations of the same implement give us the original dagger and sword. Again, the heavy stick with a large broad head can be used offensively as a club, or among peaceful persons may be converted into the harmless, necessary paddle. The mention of clubs reminds us of a curious account given by Mr. Wood of an Australian duel which is worth quoting. It appears that among the native tribes of Australia the trial by combat prevails in a somewhat singular form. If any one has been offended by a man of another tribe, he simply kills him and eats part of his body, with other ceremonies necessary to satisfy his wounded honour, but un- pleasant to describe. But if the offending party belongs to the same tribe as the aggrieved man, the preliminaries are adjusted in an extremely dignified manner, and the duel takes place as follows :—

" When the combatants arrive on the ground, the challenger lays down his waddy [the Australian club], stoops forward, and rests his hands on his knees, so as to present the crown of his head to his foe, who raises his waddy with both hands, and brings it down with all his force on the unprotected head. The blow would crush the skull and scatter the brains of any European ; but the skull of the Australian black man is made of sterner stuff, and is so portentously thick, that the blow scarcely stirs him from his position. Then the two change places, and so the queer battle goes on until one of the combatants does at last succeed in laying his antagonist prostrate, or' what is still more honourable, has the opponent's waddy break upon his skull. In either case the seconds pronounce honour to be satisfied, and both parties become the best of friends."

Has the highest civilisation produced a more perfect system of "giving satisfaction P" We can heartily recommend Man end his Handiwork to our readers. Those who seek for instruction as to the origin of the various implements used by the human race, will have much cause to thank Mr. Wood for the care and industry he has bestowed upon the subject ; while the general reader whose only object is amusement, will find here a book which he can take up at any time with the certainty of finding some curious and interesting information wherever he chances to open it.