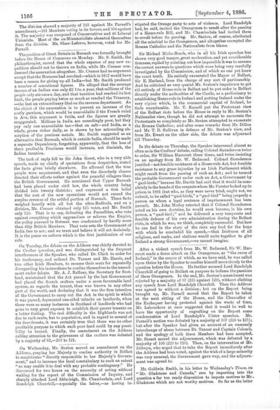 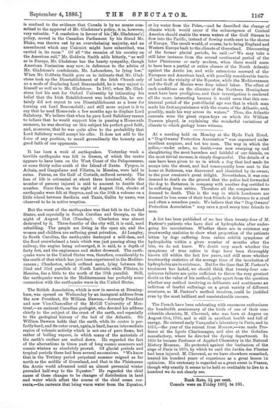 Mr. Goldwin Smith, in his letter to Wednesday's Times, on

"Mr. Gladstone and Canada," errs by importing into the question a far too ready disposition to impute motives to Mr. Gladstone which are not worthy motives. So far as the letter is confined to the evidence that Canada is by no means com- mitted to the approval of Mr. Gladstone's policy, it is, however, very valuable. "A resolution in favour of his [Mr. Gladstone's] policy, moved in the Canadian Parliament by his friend Mr. Blake, was thrown out by an overwhelming majority, and an amendment which any Unionist might have subscribed, was carried in its room." Of all "the enemies of his country on the American soil," Mr. Goldwin Smith adds bitterly, "as well as in Europe, Mr. Gladstone has the hearty sympathy, though American Fenianism may now, in deference to the advice of Mr. Gladstone's confederate, Mr. Labouchere, be lying low." When Mr. Goldwin Smith goes on to intimate that Mr. Glad- stone took up the Disestablishment of the Irish Church only as a mode of displacing Lord Beaconsfield, he is very unjust to himself as well as to Mr. Gladstone. In 1865, when Mr. Glad- stone lost his seat for Oxford University by intimating his belief that the Irish Establishment was indefensible, he cer- tainly did not expect to use Disestablishment as a lever for turning out Lord Beaconsfield ; and still more unjust is it to say that he used Home-rule a few months ago to displace Lord Salisbury. We believe that when he gave Lord Salisbury reason to believe that he would support him in passing a Home-rule measure, he was showing on this subject his perfect good faith, -and, moreover, that he was quite alive to the probability that Lord Salisbury would accept his offer. It does not add to the force of any position, to assail groundlessly the honesty and good faith of our opponents.