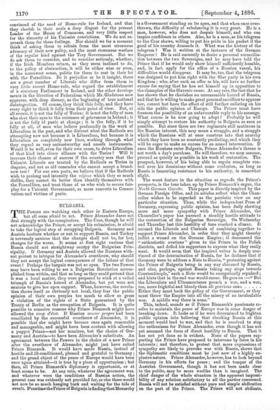 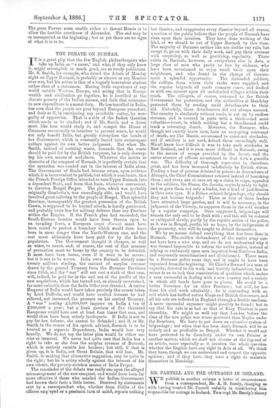 THE Powers are watching each other in Eastern Europe, but all seem afraid to act. Prince Alexander dares not deal strongly with the conspirators. The Czar, though he will not acknowledge the Prince, or accept his submission, is afraid to take the logical step of occupying Bulgaria. Germany and Austria hesitate whether or not to support Russia, and Turkey is nervously anxious that the changes shall not be, for her, changes for the worse. It seems at first sight curious that Russia should not straightway occttpy the Bulgarian Prin- cipality. If Germany and Austria allowed the Russians with- out protest to intrigue for Alexander's overthrow, why should they not accept the logical consequences of the failure of that event ? Perhaps the bargain was not so open. The two Powers may have been willing to see a Bulgarian Revolution accom- plished from within, and that as long as they could pretend that it was a local matter, they were prepared to wink at a veiled triumph of Russia's hatred of Alexander, but yet were not anxious to give her open support. When, however, the revolu- tion shows itself as obviously not local, they fear the public opinion of their own peoples too much to allow so gross a violation of the rights of a State guaranteed by the Treaty of Berlin as the occupation of Bulgaria. It is quite possible to conceive reasons why Prince Bismarck might have allowed the coup d'e'tat. If Russian amour propre had been conciliated by the successful overthrow of Alexander, it is possible that she might have become once again reasonable and manageable, and might have been content with allowing a puppet Prince—not her nominee, but the choice of Ger- many and Austria—to have been Alexander's substitute. An agreement between the Powers in the choice of a new Prince after the overthrow of Alexander, might just have suited Prince Bismarck. It would have made Russia, instead of hostile and-ill-conditioned, pleased and grateful to Germany ; and the grand object of the peace of Europe would have been once again attained—it is true by a piece of opportunism ; but then, all Prince Bismarck's diplomacy is opportunist, or at least seems to be. At any rate, whatever the agreement was, and whatever were the conditions of Russian action, the present ease was evidently not provided for, or else there would not now be so much hanging back and waiting for the tide of events. /VreantimethePrince of Bulgaria is findingthat Monarchy

is a Government standing on its apex, and that when once over- thrown, the difficulty of rebalancing it is very great. He is a man, however, who does not despair himself, and who can inspire confidence in others. Also, he is a man as his telegram to the Czar shows, willing to put his pride in his pocket if the good of his country demands it. What was the history of the telegram Was it written at the instance of the German Emperor.? He is said earnestly to desire a personal reconcilia- tion between the two Sovereigns, and he may have told the Prince that if he would only show himself sufficiently humble, and, in fact, apply for the offiae of a Russian vassal, his difficulties would disappear. It may be, too, that the telegram was designed to put him right with the Slav party in his own Kingdom ; who, after such an offer as his, will have no further excuse for saying that he has set himself up in opposition to the champion of the Slavonic cause. At any rate, the fact that he has shown that he cherishes no unreasonable hatred of Russia, and that he is willing to make great personal sacrifices to appease her, cannot but have the effect of still further enlisting on his side the public opinion of Europe. The Prince must have foreseen the possibility of an unfavourable reply to his message. What course is he now going to adopt Probably he will simply attempt to restore his authority in Bulgaria as soon as possible. But since there are two regiments still mutinous in the Russian interest, this may mean a struggle, and a struggle which the Russians will at once construe into that anarchy which they have been so constantly predicting, and which they will be eager to make an excuse for an armed intervention. If once the Russians enter Bulgaria, Prince Alexander's throne is not worth a day's purchase. He will therefore, we may assume, proceed as quietly as possible in his work of restoration. The prospect, however, of his being able to regain complete con- trol over his dominions without some confusion, as long as Russia is fomenting resistance to his authority, is somewhat slight.

The worst feature in the situation as regards the Prince's prospects, is the tone taken up by Prince Bismarck's organ, the North German Gazette. This paper is directly inspired by the German Foreign Office, and its articles reflect what the Chan- cellor wishes to be regarded as the patriotic view on any particular situation. Thus, while the independent Press of Germany, expressing public opinion, has been daily showing more and more sympathy with Prince Alexander, the Chancellor's paper has pursued a steadily hostile attitude to the restoration of the Bulgarian Sovereign. On Wednesday and Thursday last this hostility of tone reached a climax. It accused the Liberals and Clericals of combining together to support Prince Alexander' in order that they might thereby inflict a wound on the German Empire ; it denounced the ' enthusiastic ovations" given to the Prince in the Polish districts, and defied his supporters to express what they really want. It would seem that the inspired writer is deeply con- vinced of the determination of Russia, for he declares that if Germany were to address a Note to Russia, "protesting against the Prince of Bulgaria being in any way chicaned by Russia, and also, perhaps, against Russia taking any steps towards Constantinople," such a Note would be energetically repulsed ; and hints that in the end war would ensue. He goes on :—" But the Liberalists and 171tramontanes preach a war, and a war,

too, more frightful and bloody than all previous ones Either they must back the policy of the Government, or they must throw the Empire into all the misery of an incalculable war. A middle way there is none."

This, indeed, sounds as if Prince Bismarck's passionate re- solve to maintain the peace of Europe was in some danger of breaking down. It looks as if he were determined to frighten public opinion into believing that checking Russia at this moment would lead to war, and that he is resolved to stop the enthusiasm for Prince Alexander, even though it has not yet assumed the form of direct hostility to Russia. That it has not yet done so is evident. None of the papers sup- porting the Prince have proposed to intervene by force in his interests ; and therefore, to protest that mere expressions of sympathy are likely to provoke war with Russia, shows that the diplomatic conditions must be just now of a highly ex- plosive nature. Prince Alexander, however, has to look beyond Germany in his efforts for peace ; and the temper of the Austrian Government, though it has not been made clear to the public, may be more warlike than is imagined. The chief danger of the whole situation is the apparent impossi- bility of any solution satisfactory to all the parties concerned. Russia will not be satisfied without pare and simple abdication on the part of the Prince. The Prince will not abdicate.

The great Powers seem unable either to thwart Russia or to allow the forcible overthrow of Alexander. The end may be as unsuspected as the beginning ; but as yet there are no signs of what it is to be.