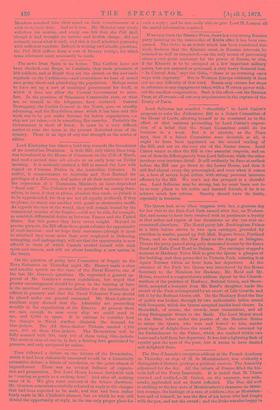 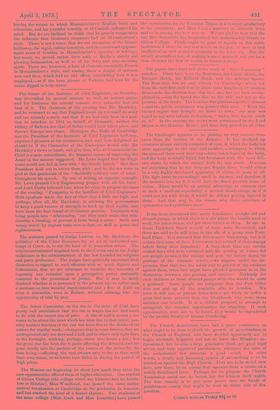 Page 2, 5 April 1873 — The Due d'Aumale's reception address at the French Academy on
Close

The Due d'Aumale's reception address at the French Academy on

Thursday, an doge of M. de Montalembert, was evidently a distinguished literary, perhaps a political, success. The Assembly adjourned for the day. All the talents of France filled the his- toric hall of the Forty Immortals. It is noted that M. Thiers yawned and nodded,—M. Guizot, on the contrary, was wide- awake applauded and no doubt reflected. The Due did well in striking as the key-note of Montalembert's character its daunt- less courage, the heritage of a race of soldiers—for, as Montalem- bert said of himself, he was the first of his house who had fought with the pen, and not the sword;; and the Duke was also happy in

tracing the extent to which Montalembert's English birth and education, and his youthful worship of O'Connell, influenced his I mind. But we are inclined to think that he greatly exaggerates the influence that Grattan's eloquence had on hiontalemberes style. There is not a trace, that we can recognise, of the bizarre brilliancy, the rapid, rolling invective, and the condensed epigram- matic sense of Grattan in Montalemberf s speeches or writings, ' but much, we should rather have said, of Burke's stately and glowing declamation, as well as of his lofty and time-scorning spirit. There are, however, a host of elements essentially French in Montalembert's style, and among them a sleight of sarcasm now and then, which had an odd effect, considering how it was employed,--as if the keen phrase of Voltaire had been for the nonce dipped in holy-water.