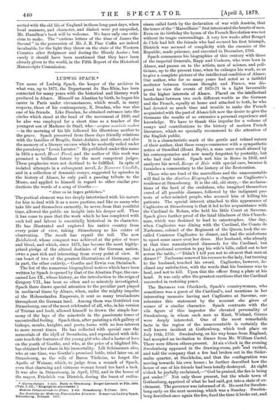 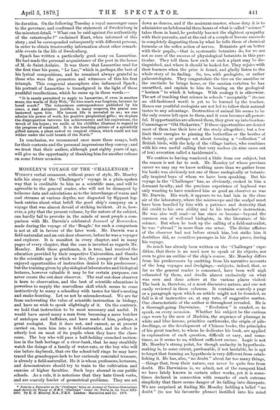 'THE name of Ludwig Spach, the keeper of the archives in what was, up to 1871, the Department du Bas-Rhin, has been connected for many years with the historical and literary work produced in Alsace. Himself an Alsatian by birth, he began his .career in Paris under circumstances, which recall, in many respects, those of his contemporary, X. Doudan, who was also one of his friends. Like Doudan, he obtained entrance into the circles which stood at the head of the movement of 1830, and he also was employed for a short time as a teacher of the youngest son of Madame de Stael, who—magna nominis umbra —in the morning of his life followed his illustrious mother to the grave. Spach preserved from those days friendly relations with the families of Broglie, Saint-Aulaire, and others, and also the memory of a literary success which he modestly veiled under the pseudonym " Louis Lavater." He published under this name in 1834 a novel, Henri Feral, and the author of this work was promised a brilliant future by the most competent judges. These prophecies were not destined to be fulfilled. In spite of isolated attempts in a subsequent novel, Le Nouveau Candkle, and in a collection of dramatic essays, suggested by episodes in the history of Alsace, he only paid a passing tribute to the Muses, and applied to himself in regard to other similar pro- ductions the words of a song of Goethe :— " Aber es ist Hegel] geblieben."

The poetical element was too deeply intertwined with his nature for him to deal with it as a mere pastime, and like so many who take life and themselves earnestly, he never, from that youthful time, allowed the public an insight into his deeper self. Thus it has come to pass that the work which he has completed with such toil and labour is essentially, historical in its character.

He has illustrated and explored his native country from every point of view, taking Strassbourg as his centre of observation. The result has repaid the toil. The new Beichsland, whose conquest was achieved at the price of tears and blood, and which, since 1871, has become the most highly- prized pledge of the altered destinies of the German nation, owns a past rich and interesting from every point of view. It .can boast of two of the greatest illustrations of Germany, one in part, the other entirely,—Goethe and Erwin von Steinbach.

The list of the numerous biographical notices which have been written by Spach is opened by that of the Alsatian Pope, the can- onised Leo IX., whose history, as the introduction to the reign of Gregory VII., has been so often and so minutely investigated. Spach there draws special attention to the peculiar part played in mediaeval times by Alsace, when, under the mighty impulse of the Hohenstaufen Emperors, it sent so many troubadours throughout the German land. Among them was Gottfried von Strassbourg, one of the most celebrated of all, who, in his version of Tristan and Isolt, allowed himself to drown the simple har- mony of the lays of the minstrels in the passionate tones of uncontrolled feeling. Spach then, after painting a rich gallery of bishops, monks, knights, and poets, turns with no less interest to more recent times. He has collected with special care the memorials of the idyll of Sesenheim, and reproduced with deli- cate touch the features of the young girl who shed a lustre of love on the youth of Goethe, and who, at the price of a blighted life, has obtained her share in his immortality. Lili Schoneman also, who at one time, was Goethe's promised bride, tried later on, at Strassbourg, as the wife of Baron Tfirkeim, to forget the Apollo of Weimar, which, to judge from a remark of Spach, even that charming and virtuous woman found too hard a task. It was also in Strassbourg, in April, 1792, and in the house of the mayor, Friedrich von Dietrich, during the burst of enthu-

siasm called forth by the declaration of war with Austria, that the tones of the " Marseillaise " first intoxicated the hearts of men.

Even on its birthday the hymn of the French Revolution was not without its tragic surroundings. A very few weeks after Rouget de 'Isle had left the friends who had secured his first triumph, Dietrich was accused of complicity with the enemies of the Republic, made prisoner, and executed in December, 1793.

Spach commences his biographies of this century with those of the imperial Generals, Rapp and Coehorn, who were born in Alsace, and passes on to the artists, men of science, and poli- ticians, up to the present time, when he enlarges his work, so as to give a complete picture of the intellectual condition of Alsace. Our author, who for so many years had acted as a faithful mediator between German thought and France, was dis- posed to view the events of 1870-71 in a light favourable to the higher interests of Alsace. Placed on the intellectual borderland between two such different worlds as the German and the French, equally at home and attached to both, he who had devoted so much time and trouble to make the French acquainted with the past of Alsace felt now the desire to give the Germans the results of so extensive a personal experience and knowledge. We have to thank this impulse for a volume of essays and contributions to the history of modern French literature, which we specially recommend to the attention of the English public.

It is a characteristic mark of the gentle and refined nature of their author, that these essays commence with a sympathetic notice of Stendhal (Henri Beyle), a man once much abused by his contemporaries and now nearly forgotten by posterity, but who had real talent. Spach met him in Rome in 1832, and analyses his novel, Rouge et Noir with special care, because it furnishes a commentary to the history of the Restoration.

Those who are fond of the marvellous and the unaccountable will find in the Alsatian Biographies a chapter on Cagliostro's residence at Strassbourg. It is the old, old story,—the acclama- tions of the herd of the credulous, who imagined themselves cured of all possible diseases, followed by the indignant pro- tests of sober-minded people, who accused him of killing his patients. The special interest attached to this appearance of Cagliostro at Strassbourg is that it led to his acquaintance with the Cardinal de Rohan, who held his little Court at Saverne.

Spach gives further proof of the fatal blindness of this Church- man, which was destined to lead to catastrophes. One day, when Cagliostro was dining with the Cardinal, the Comte de Narbonne, colonel of the Regiment of the Queen, took the so- called Comtesse Cagliostro to dinner, and had the misfortune to upset some sauce over her dress. Her husband, who already at that time manufactured diamonds for the Cardinal, but had a profound aversion to pay his wife's bills, called out to her across the table,—" Didn't I tell you not to sit next that man at dinner ?" Narbonne renewed his excuses to the lady, but turning to the husband, touched his sword. Cagliostro, however, de- clined any satisfaction, with the words that his business was to heal, and not to kill. Upon this the officer flung a plate at his head. It was only after the greatest exertions that the Cardinal succeeded in restoring peace.

The Baroness von Oberkirch, Spach's countrywoman, who sometimes was a guest of the Cardinal's, and mentions in her interesting memoirs having met Cagliostro at Saverne, cor- roborates this statement by the account she gives of scenes of a similar character. Spach contrasts with the vile figure of this impostor the elevated personality of Swedenborg, in whom such men as Kant, Wieland, Games were deeply interested. One of the most remarkable facts in the region of the unaccountable is certainly the well known incident at Gothenburg, which took place on July 19th, 1759. Swedenborg, on his way home from England, had accepted an invitation to dinner from Mr. William Castel. There were fifteen others present. At six o'clock in the evening Swedenborg appeared in the drawing-room, pale and excited, and told the company that a fire had broken out in the Soder- malm quarter, at Stockholm, and that the conflagration was moving towards his own house; he further described how the house of one of his friends had been totally destroyed. At eight o'clock he joyfully exclaimed,—" God be praised, the fire is being got under !" Not only those present, but the whole town of Gothenburg, apprised of what he had said, got into a state of ex- citement. The governor was informed of it. He sent for Sweden- borg early on the next morning, which was a Sunday. Sweden- borg described once again the fire, fixed the time it broke out, and its duration. On the following Tuesday a royal messenger came to the governor, and confirmed the statement of Swedenborg in the minutest detail. " What can be said against the authenticity of the catastrophe ?" exclaimed Kant, when informed of this story ; and he corresponded subsequently with different persons, in order to obtain trustworthy information about other remark- able events in the life of Swedenborg.

Spach has written a particularly good essay on Lamartine. He had made the personal acquaintance of the poet in the house of M. de Saint-Aulaire. It was there that Lamartine read for

the first time his poem, " Le Lac," which is, perhaps, the best of his lyrical compositions, and he remained always grateful to those who were the promoters and witnesses of this his first triumph. This congenial atmosphere also influenced Spach ; his portrait of Lamartine is transfigured in the light of these youthful recollections, which he sums up in these words :—

"It is surely permitted to apply to Lamartine, if even in another sense, the words of Holy Writ, To him much was forgiven, because he loved much!' The voluminous correspondence published by his niece, a real Antigone, justifies, in many respects, the praise now bestowed upon him. His inmost life is revealed to us ; we can admire his power of work, his positive prophetical gifts ; we deplore the disproportion between his achievements and his aspirations, the wreck of his hopes ; we smile at his childlike illusions in regard to the progress of mankind. It is the touching picture of a splendidly gifted nature, a plant suited to tropical climes, which could not but wither under the cold breath of the North."

In conclusion, we recommend once more these essays, both for their contents and the personal impressions they convey ; and we trust that their author, although past eighty years of age, will give us the opportunity of thanking him for another volume on some future occasion.