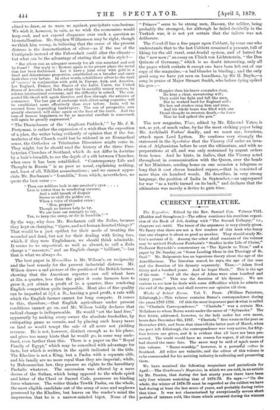 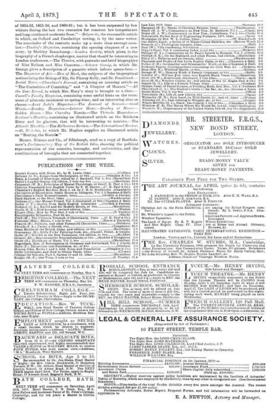 volume contains Burns's correspondence during the years 1787-1791. Of this the most important part is what is called the "Clarinda Correspondence." " Clarinda " was a certain Mrs. McLehose to whom Burns wrote under the name of " Sylvander." The first letter, addressed, however, to the lady under her own name, bears date December 6th, 1787. " Clarinda " first wrote to the poet on December 24th, and from that time till the latter part of March, when the poet left Edinburgh, the correspondence was very active, for fifty- four letters are given, and it is evident that all have not been pre- served. The world would have no reason for regret, if all the others had shared the same fate. The same may be said of much more of this volume. "Burns-worship," however, is a powerful cu/tus in Scotland. All relics are valuable, and the editor of this volume is to be commended for his untiring industry in collecting and preserving. them.

We have received the following magazines and periodicals for April :—The Gentleman's Magazine, in which we are told, in an article by Mr. Proctor, that during the last ninety years there have been only four winters matching that of 1878-79. He says :—" On the whole, the winter of 1878.79 must be regarded as the coldest we have had during at least the last score of years, and probably during twice that time. It was not characterised by exceptionally severe short periods of intense cold, like thaw which occurred during the winters of 1854-55, 1855-56, and 1860.61; but it has been surpassed by few winters during the last two centuries for constant low temperature and long-continued moderate frost."—Belgratia, the seasonable article in which, on Oxford and Cambridge rowing, is by the same writer. The remainder of the contents make up a more than average num- ber.—Tinsley's Magazine, containing the opening chapters of a new story, by Shelsley Beauchamp.—London Society, which gives, in the biography of a French shopkeeper, matter that should be interesting to London tradesmen.—The Theatre, with portraits and brief biographies of Miss Nelson and Miss Cameron.—Science Gossip, in which Mr. George gives a description of a parasite which infests queen-bees.— The Magazine of Art.—Men, of Mark, the subjects of the biographical notices being the Bishop of Ely, Sir Fitzroy Kelly, and Dr. Frankland.— social Notes.—Chantbers's Journal, containing an amusing article on "The Curiosities of Courtship," and "A Chapter of Hoaxes."—All the Year Round, in which Mrs. Hoey's story is brought to a close.— Cassell' s Family Magazine, containing some useful hints on the treat- ment of ailments incidental to spring-time, and an interesting chat on cheese.—Aunt Judy's Magazine.—The Journal of Science.—Good Words.—Sunday Magazine.—Leisure Hour.—Sunday at Rome.— Golden Hours.—The Cheve/ey Novels.—The Victoria Magazine. Scribner' s Monthly, containing an illustrated article on the Stickeen River and its glaciers, that will be interesting to tourists.—The Atlantic Monthly.—The Melbourne Review . —The International Review. —St. Nicholas, to which Mr. Hughes supplies an illustrated article on "Beating the Bounds."

Messrs. Nimmo and Co., of Edinburgh, send us a copy of Bartholo- mew's Parliamentary Map of the British Isles, showing the political representation of the counties, boroughs, and universities, and the combinations of boroughs that are connected together.