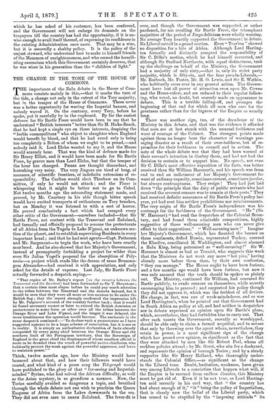 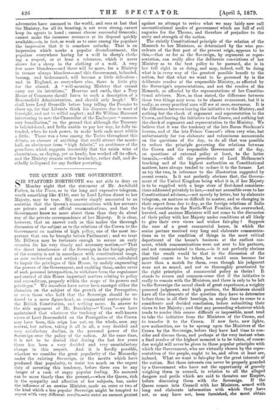 THE CHANGE IN THE TONE OF THE HOUSE OF COMMONS.

THE importance of the Zulu debate in the House of Com- mons consists mainly in this,—that it marks the turn of the tide, a change not only in the extent of the Tory majority, but in the temper of the House of Commons. There never was a better opportunity for waving the Imperial banner, and nobody waved it. On the contrary, every Tory, before he spoke, put it carefully by in the cupboard. By far the easiest defence for Sir Bartle Frere would have been to say that he understood "British interests" better than Sir M. Hicks-Beach, that he had kept a single eye on those interests, despising the "feeble cosmopolitans" who object to slaughter when England would benefit by blood, and that he had erred only in being too completely a Briton of whom we ought to be proud,—and nobody said it. Lord Elcho wanted to say it, and the House would scarcely hear. That was the kind of defence made for Sir Henry Elliot, and it would have been made for Sir Bartle Frere, by graver men than Lord Elcho, but that the temper of the hour has changed. Paeans are thought discordant, and hurrahing very noisy. The very Jingoes are tired of brag, of menaces, of scientific frontiers, of indefinite extensions of re- sponsibility. The Carlton would elect Theebaw on its Com- mittee, if only he would not attack ; and the Times is whispering that it might be better not to go to Cabul. Not twelve months ago the astounding statement made, and proved, by Mr. Courtney in his able though bitter speech would have excited transports of enthusiasm on Tory benches, but on Monday it was listened to with a sort of horror. He proved conclusively a fact which had escaped every other critic of the Government—ourselves included—that Sir Bartle Frere, not content with the Transvaal and Zululand, had formally and officially proposed to assume the protectorate of all Africa from the Tugela to Lake N'gami, an unknown sec- tion of the planet, and to establish supervising Residents in every important kraal ; and that he had sent agents—Capt. Patterson and Mr. Sargeaunt—to begin the work, who have been cruelly mur3ered. And he also showed that her Majesty's Government, instead of peremptorily forbidding a project far wilder than even Sir Julius Vogel's proposal for the absorption of Poly- nesia—a project which reads like the dream of some Brumma- gem Alexander—had received it with appreciation, and only asked for the details of expense. Last July, Sir Bartle Frere actually forwarded a despatch saying,— " That copies of Mr. Bailey's report [on the country between the Transvaal and the Zambesi] had been forwarded to Sir T. Sherstone ; that a certain time must elapse before he could pay much attention to the tribes between the Transvaal and the deserts beyond, but it would be seen that they were all more or less anxious to be under the British flag ; that the report strongly confirmed the impression left by Mr. Palgrave's account of the country further back ; that it would be found necessary sooner or later to extend the British dominion or protectorate in some form or other over all the tribes between the Orange River and Lake N'gami, and the longer it was delayed, the more troublesome the operation would become. The enclosure in the same despatch continued :—' To declare such a protectorate as I have suggested appears to be a large scheme of annexation, but it is not so in reality. It is simply an authoritative declaration of facts already recognised by every petty chief between the Orange River and the southern limit of the Portuguese territory, that the Sovereign of England is the great chief the displeasure of whose smallest official is more to be dreaded than the wrath of powerful native chieftains, who habitually protect the weak against the powerful aggressor, and loves to maintain peace.' " Think, twelve months ago, how the Ministry would have bounced about that, and how their followers would have roared, and what kind of a prose song the Telegraph would have published to the glory of that " far-seeing and Imperial- minded " Syrian, who had solved the African difficulty, as well as the Asian mystery, in so grandiose a manner. Now, the Tories carefully avoided so dangerous a topic, and breathed through the whole debate not one wish to proclaim the Queen Empress of Africa from the Lakes downwards to the sea. They did not even care to annex Zululand. The fever-fit is over, and though the Government was supported, or rather pardoned, for not recalling Sir Bartle Frere, the triumphant majorities of the period of Jingo delirium were wholly wanting. No average Tory heartily supported the Government in debate. No Liberal ratted in a grand oration. Even " Tear'em " showed no disposition for a bite of Africa. Although Lord Harting- ton formally and distinctly accepted the responsibility of Sir C. Dilke's motion, which he had himself corrected, and although Sir Stafford Northcote, with equal distinctness, took up the challenge on behalf of the Ministry, the Government had a majority of only sixty,—that is, only its strict party majority, which is fifty-six, and the four pseudo-Liberals,- Mr. Roebuck, Mr. Foster, Mr. H. 0. Lewis, and Sir E. Watkin, who habitually cross over in any general action. The Govern- ment have lost all power of attraction even upon Mr. Cowen and the Home-rulers, and are reduced to their regular follow- ing, who voted, no doubt, but scarcely made an appearance in debate. This is a terrible falling-off, and presages the beginning of that end for which all men who care for the greatness rather than for the bigness of the Empire so wearily long.

There was another sign, too, of the decadence of the Ministry in this debate, and that was the evidence it afforded that men are at last struck with the unusual feebleness and want of courage of the Cabinet. The strongest points made against them no longer bore the character of warnings pre- saging disaster as a result of their over-boldness, but of re- proaches for their feebleness in council and in action. The note of the whole debate was that they had been warned of their servant's intention to disobey them, and had not had the decision to restrain or to support him. No speech, not even Sir C. Dilke's most effective exposition of the facts, was better received than Sir William Harcourt's, and his speech was from end to end an indictment of her Majesty's Government for want of ordinary capacity, sometimes earnest, sometimes jocular, but always contemptuous. They resign ! They had just laid down "the principle that the duty of public servants who had received the severest censure was to remain at their posts." They had received definite assurances of Sir Bartle Frere's policy last year, yet had sent him neither prohibitions nor reinforcements. The very origin of Sir Baffle Frere's independence was his contempt for the feebleness of the Government. " He " (Sir W. Harcourt) "had read the despatches of the Colonial Secre- tary, and had found them admirable compositions, highly suggestive of those well-meaning men who can never give effect to their suggestions." " Well-meaning men !" Imagine her Majesty's Government, which has flaunted the banner on three continents, defied Russia, regenerated Turkey, coerced the Khedive, conciliated M. Waddington, and almost alarmed a Zulu King, being patronised as " well-meaning !" Sir W. Harcourt is almost as had as Tenniel, who suggests this week that the Ministers do not want any more "hot pies," having already more before them than, by their own confession, " they can manage." The House ought to have been furious, and a few months ago would have been furious, but now it was only amused that the truth should be spoken so plainly out. The Ministry, continued Sir William, had censured Sir Bartle publicly, to evade censure on themselves, while secretly encouraging him to proceed ; and supported his policy though they did not approve it, which was the feeblest of all devices. His charge, in fact, was one of weak-mindedness. and so was Lord Hartington's, when he pointed out that Gcvernment had in South Africa no policy at all, and had neither in despatches nor in debate expressed an opinion upon Sir Bartle's plans, which, nevertheless, they had forbidden him to carry out. That after such taunts the Government, recently so worshipped, should be able only to claim a formal acquittal, and to secure that only by throwing over the agent whom, nevertheless, they retain in power, is a most significant sign of the change which has passed over opinion, as significant as the fact that they were attacked by men like Sir Robert Peel, whom all reckless policies attract ; by Mr. Gorst, who sits for a dockyard, and represents the opinion of borough Tories ; and by a steady supporter like Sir Henry Holland, who thoroughly under- stands the Colonial Office,—as significant as the change in the Liberal tone. Doubt, hesitation, weakness, have given way among Liberals to a conviction that happen what will, if the Empire is be rescued from endless disaster, this Ministry must be got rid of. Even if it be not true, as Lord Harting- ton said recently in his cool way, that " the country has had about enough of it," "it" being the policy of Imperialism, that is clearly now the belief of the Liberal party, which has ceased to be stupified by the " imposing attitude " its

adversaries have assumed in the world, and sees at last that the Ministry, for all its boasting, is not even strong, cannot keep its agents in hand ; cannot choose successful Generals; cannot make the immense resources at its disposal quickly available,—is, in fact, so weak as to raise among the populace the impression that it is somehow unlucky. That is an impression which marks a popular disenchantment, the populace everywhere having for a wolf in sheep's cloth- ing a respect, or at least a tolerance, which it never shows for a sheep in the clothing of a wolf. A very few more blunders—and there will be more, for a Ministry in tremor always blunders—and this Government, belauded, besung, and bedecorated, will become a little ridiculous ; and in England, as everywhere else, there is little pity for the absurd. A " well-meaning Ministry that cannot carry out its intentions." Heavens and earth, that a Tory House of Commons should listen to such a description of a Beaconsfield Administration, and should only laugh ! We shall have Lord Granville before long telling the Premier to cheer up, for that Liberals think his disasters due to want of foresight, and not to wilful neglect ; and Sir William Harcourt intervening to save the Chancellor of the Exchequer " unneces- sary humiliation," on the ground that although the Treasury is behind-hand, and India unable to pay her way, he fully in- tended, when he took power, to make both ends meet within a little. There was a tone among the Tories throughout this debate, an absence of anything that could attract the music- hall, an abstinence from "high falutin'," an avoidance of the grandiose, which suggests irresistibly that the raisin wine of chauvinism, so cloying, yet so heady, has worked off its effect, and the Ministry remain rather headachy, rather dull, and de- cidedly indisposed for any further posturing.