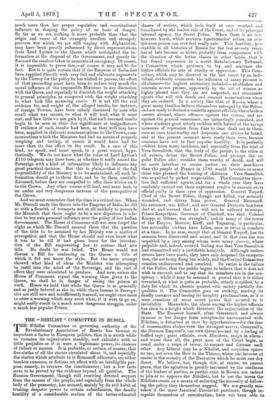 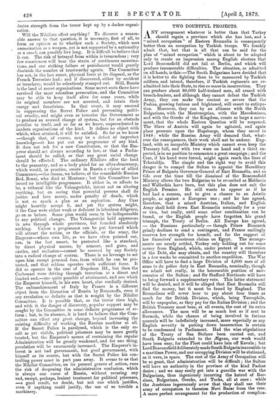 THE "NIHILIST " COMMITTEE IN RUSSIA. classes of society, which

feels itself at once crushed and humiliated by the leaden rule of the Court, and of its principal internal agency, the Secret Police. When there is no law. however harsh, which restricts functionaries' action, no con- spicuous person can ever feel really safe. This hostility, per- ceptible in all histories of Russia for the last seventy years, has of late become so bitter, probably from comparison with the situation of the better classes in other lands, that it has found expression in a secret Revolutionary Tribunal, a Committee which professes to try and sentence the higher officials for acts of cruelty or oppression. This Com- mittee, which may be directed in the last resort by an indi- vidual, evidently commands the adhesion of many persons in all classes—the highest aristocracy included—establishes and conceals secret presses, apparently by the aid of women so highly placed that they are not suspected, and commands agents who will risk death and commit assassinations when they are ordered. In a society like that of Russia, where a great many families believe themselves outraged by the Police, and are ready to declare a vendetta against officials, where broken careers abound, where offences against the system, and not against the general conscience, are unsparingly punished, and where students grow utterly reckless with hatred of the savage measures of repression from time to time dealt out to them, men at once trustworthy and desperate can always be found, and at the present moment more easily than ever, because assassins have not to face popular hostility. It is perfectly evident from many incidents, and especially from the trial of Vera Sassulitch, that the body of the people, in the cities at all events, detest the Secret Police, and perhaps the re- gular Police also ; consider them worthy of death, and will no more interfere to secure justiee on their murderers than the people of France in 1789 would interfere to arrest those who planned the burning of châteaux. Vera Sassulitch was acquitted by picked respectables. The Committee there. fore find sufficient agents, and for a whole year they have resolutely carried out their expressed resolve to execute every official guilty in their eyes of oppression. General Trepoff. Chief of the Secret Police, though not killed, was seriously wounded, and driven from power. General Mezenzeff, his successor, was killed ; and now General Drenteln has been shot at, and warned that he will not be suffered to escape. Prince Krapotkine, Governor of Charkoff, was shot ; Colonel Knopp, at Odessa, was strangled ; and in many of the towns of the Empire, Moscow, Kieff, and Taganrog, in particular, less noticeable victims have fallen, once or twice in numbers at a time. In no case, except that of General Trepoff, has the assassin been discovered and seized, and in that case she was acquitted by a jury among whom were many decords, whose palpable and, indeed, avowed feeling was that Vera Sassulitch had committed only a justifiable homicide. Although endless arrests have been made, they have only deepened the exaspera- tion, the net being flung too widely, and the Central Committee remains undiscovered and unseized. So entire is the failure of the Police, that the public begins to believe that it does not wish to succeed, and to say that its members are in the con- spiracy ; while it may be assumed as proved that it is either terrorised, or what is quite as probable, utterly stupified, by a duty for which its chronic quarrel with society partially dis- qualifies it. The Committee goes on striking, sending its deadly menaces and issuing its haughty proclamations, as if it were conscious of some secret power that secured to it invisibility. Meanwhile, the alarm among the higher officials has risen to a height which threatens the organisation of the State. The Emperor himself, often threatened, and always in more or less danger from conspiracies unconnected with Nihilism, is disturbed at once by apprehension—for the fear of assassination shakes even the strongest nerves, Cromwell's,. the German Emperor's, our own Queen's—and by a feeling of baffled rage ; great officials, even Ministers, resign in alarm ; and worse than all, the great men of the Court begin, as usual under a reign of terror, to suspect and distrust each other. Any Liberal may be a Nihilist, and suspicion spares no one, not even the Heir to the Throne, whose one interest of course is the security of the Executive which he must one day direct. We believe, too, though this, of course, we cannot prove, that the agitation is greatly increased by the readiness of the leaders of parties, as parties exist in Russia, not indeed to join or to approve the Nihilists, but to use the terns the Nihilists create as a means of enforcing the necessity of follow- ing the policy they themselves suggest. We are greatly mis- taken if the more fanatical Panslavist partisans, though in- capable themselves of assassination, have not been able to derive strength from the terror kept up by a darker organi- sation.

Will the Nihilists effect anything? To discover a reason- able answer to that question, it is necessary, first of all, to form an opinion as to whether such a Society, which uses assassination as a weapon, yet is not supported by a nationality or a creed, can possibly live long. It is difficult to believe that it can. The risk of betrayal from within is tremendous ; very few consciences will bear the strain of continuous assassina- tions, and one striking failure or punishment would greatly diminish the number of trustworthy agents. The Committee has not, in the last resort, physical force at its disposal, as the French Terrorists had ; and if discovered, either by accident or treachery, would be relentlessly stamped out. Still, Russia is the land of secret organisations. Some secret sects there have survived the most relentless persecution, and the Committee may be able to keep itself alive for some years, while its original members are not arrested, and retain their energy and fanaticism. In that event, it may succeed in suppressing the Secret Police and preventing politi- cal cruelty, and might even so terrorise the Government as to produce an avowed change of system, but for an obstacle peculiar to itself, and so far as we know, unprecedented in modern organisations of the kind. It defines no object with which, when attained, it will be satisfied. So far as we know —though that, of course, may be a defect of imperfect knowledge—it has put out no programme of any kind. It does not ask for a new Constitution, or that the Em- peror should act always according to law, or that a Parlia- ment should be called, or that any great social change should be effected. The ordinary Nihilists offer the land to the peasantry, and as a body plead for an ultra-democracy, which would, in practice, create in Russia a regime of allied Communes,—the dream, we believe, of the remarkable Russian Red, Benni, who died at Mentana ; but this Committee has issued no intelligible programme. It either is, or affects to be, a tribunal like the Vehmgericht, intent not on altering anything, but on seeing that powerful persons shall do justice and lore mercy, under penalty of death, which is not so much a plan as an aspiration. Any Czar might heartily accept it, and yet the system might, if the Czar were either weak or deficient in laborious diligence, go on as before. Some plan would seem to be indispensable to any political changes. The Vehmgericht held oppressors in awe through whole provinces, but founded absolutely nothing. Unless a programme can be put forward which will attract the nation, or the officials, or the army, the Emperor—whose own life, as we have often pointed out, can, in the last resort, be protected like a standard, by direct physical means, by armour, and guns, and castles, and seclusion—cannot be coerced by any Society into a radical change of system. There is no leverage to act upon him except personal fear, from which he can be pro- tected, and that seldom operates with sufficient force. It did so operate in the case of Napoleon III., but then the Carbonari were driving through terrorism at a direct and limited end,—one quite possible of attainment, and one which the Emperor himself, in his own heart, also cordially desired. The enfranchisement of Italy by France is a different object from the liberation of Russia by Romanoffs, even if any revolution so definite as that is sought by the Nihilist Committee. It is possible that, as the terror rises high, and with it the danger of discovery, popular support may be sought by the Committee in some definite programme of re- form ; but, in its absence, it is hard to believe that the Com- mittee can effect any great change, beyond increasing the existing difficulty of working the Russian machine at all. If the Secret Police is paralysed, which is the only re- sult as yet visible, political prisoners may be more gently treated, but the Emperor's means of restraining the regular Administration will be greatly weakened, and for one thing, peculation will be enormously increased. The Emperor's in- terest is not bad government, but good government, with himself as its source, but with the Secret Police his con- trolling power must in part pass away. It seems to us that the Nihilist Committee, on its present groove of action, runs the risk of deepening the administrative confusion, which is always one curse of Russia, without securing any end, except, perhaps, lenient treatment for political prisoners, —a good result, no doubt, but not one which justifies, even if anything could justify, the use of so terrible a machinery.