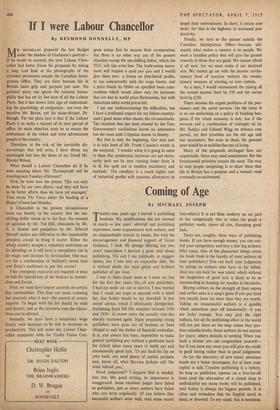 If I were Labour Chancellor

By DESMOND DONNELLY, MP MR. MACMILLAN prepared the last Budget under the shadow of Gladstone's portrait— if he wants to succeed, the next Labour Chan- cellor had better frame his proposals by taking a long cool look at the photographs of the crowded pavements outside the Canadian Immi- gration Office. They are there because life in Britain lacks grip and purpose just now. No political party can ignore the national hemo- philia that has set in; but least of all the Labour Party. But it has shown little sign of understand- ing the psychology of emigration : not even the intuitive Mr. Bevan, nor his water-diviner, Dr. Balogh. Yet the plain fact is that if the Labour Party is to make a success of its next period of office, its main objective must be to secure the enthusiasm of the ablest and most adventurous people in the country.

Therefore, at the risk of the inevitable dis- advantages that will arise, I have thrust my stockinged feet into the shoes of my friend Mr. Harold Wilson.

What should a Labour Chancellor do if he were standing where Mr. Thorneycroft will be standing next Tuesday afternoon?

First, he must save the pound. This can only be done 'by our own efforts—and they will have to be better efforts than we have yet managed.' 'Thus wrote The Times under the heading of a Haley's Comet last Monday.

A Chancellor in the present circumstances must say bluntly to the country that the ten- shilling dollar stares us in the face. No amount of agitation by Mr. Ted Hill, obtuseness by Mr. E. J. Hunter and poujadism by Mr. Edward Martell makes any difference to this unpalatable prospect, except to bring it nearer. Either the whole country accepts a voluntary restriction on its spending; or it will have a compulsory cut in Its wages and incomes by devaluation. One may cry for a combination of Stafford's moral tone and Ernie's earthiness to put this across!

Four emergency measures are required at once to halt the speculation of the bankers in Amster- dam and Zurich.

First, we must have import controls on certain key commodities. This does not mean rationing but precisely what it says—the control of certain imports. To begin with the list should be wide and drastic; and as the pressures ease the relaxa- tions can be effected.

Secondly, we must have a temporary wage freeze, with increases to be tied to increases in productivity. This will make any Labour Chan- cellor unpopular with the Trades Union Con- gress unless first he secures their co-operation, but there is no other way out of the present situation except the ten-shilling dollar, which the TUC will like even less. The trade-union move- ment will require a quid pro quo and I would give them two : a freeze on distributed profits, to run concurrently with the wage freeze; and a price freeze by Order on specified basic com- modities which would allow only for increases that are due to world price fluctuations, but with reductions when world prices fall.

I am not underestimating the difficulties, but I have a profound respect for my fellow-country- men's good sense when shown the circumstances. The situation that has been created by the Tory Government's vacillations leaves no alternative but the most acid Crippsian lemon in history.

But that is only the beginning. Our next task is to take heed of Mr. Frank Cousins's words at the weekend : 'I wonder when it is going to come to them that production increases are not neces- sarily spelt out by men running faster from A to B, but spelt out in modern machinery and methods.' The corollary is a much higher rate of industrial profits with taxation allowances to impel their reinvestment. In short, it means new tools; for that is the highway to increased pro- ductivity.

Finally, we turn to the queues outside the Canadian Immigration Office—because ulti- mately what makes a country is its people. We want a taxation policy that will give the greater rewards to those that are good. We cannot afford it all now, but we must make it our declared aim. We cannot go on with the present revolu- tionary level of taxation without the revolu- tionary measure of erecting an iron curtain.

As a start, I would recommend the raising of the earned income limit by £50 and the surtax limit by f250.

There remains the urgent problems of the pen- sioners and the social services. On the latter it is no use embarking on a policy of building hos- pitals if the whole economy is sick; but if the revenue and a combination of midnight oil by Mr. Sandys and Colonel Wigg on defence cuts permit, my first priorities are the old age and war pensioners. But even to them, the greatest asset would be to stabilise the cost of living.

Many of the proposals envisaged here are unpalatable. Some may need amendment. But the fundamental priorities remain the same. The way to stop people emigrating is to show them that life in Britain has a purpose and a reward—and eventually an excitement.