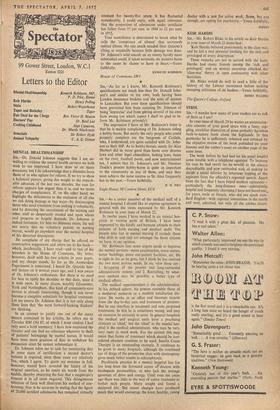 much less than Dr. Donald John- son's and similar to my own, both having been London insurance brokers and the sons of doctors in Lancashire. But even these qualifications should have prevented him from accusing Dr. Johnson of being 'imprecise' and from getting several of his own facts wrong (on which aspect 1 shall be glad to in- form Mr. Robinson privately).

The impression I have of Mr. Robinson's letter is that he is mainly complaining of Dr. Johnson riding a hobby-horse. But surely the only people who could properly complain are the burgesses of Carlisle, who, I understand, are quite satisfied with Dr. John- son as their MP. As to hobby-horses, surely Sir Alan Herbert did us more good than harm over divorce laws and other legal absurdities, betting laws, boats on the river, football pools, and now entertainment tax. I submit that Dr. Johnson's and Mr. Norman Dodds's present hobby-horse is quite as important to the community as any of these, and may they soon achieve the same success as Sir Alan frequently has in the past.—Yours faithfully,