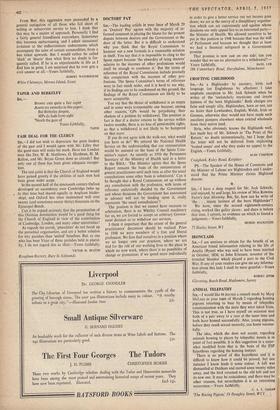 SIR,—As a Highlander by ancestry, birth and language (an Englishman by affection) I take emphatic exception to Mr. Jack Schwab when he writes of the 'melancholy mysticism and innate laziness of the born Highlander.' Both charges are false and simply silly. Highlanders, born or not, are no lazier than Lowlanders, English, Welsh, Irish or German, otherwise they would not have made such excellent pioneers elsewhere when evicted wholesale from their native land.

Strix, who obviously knows the Highlands well, has made hay of Mr. Schwab in 'The Point of No Return,' no doubt unintentionally, but I hope that the latter will not be deferred from explaining 'bashed neeps' and why they make no appeal to the English.—Yours faithfully,

ALAN CAMERON Craigbank, Exley Road, Keighley PS.—The Speaker of the House of Commons and the Minister of Labour are Highlanders and I under- stand that the Prime Minister claims Highland descent.