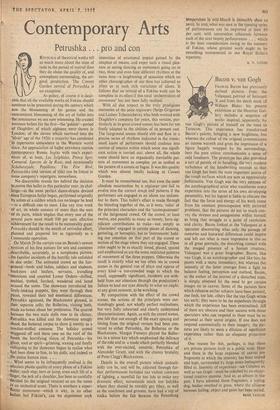 FRANCIS BACON has previously derived pictures from the Velasquez portrait of Innocent X and from the death mask of William Blake; his present exhibition at the Hanover Gal- lery' includes a sequence of works inspired, apparently, by van Gogh's picture of himself on the road to Tarascon. This experience has transformed Bacon's palette, bringing a new brightness, but whereas the colour of the original communicates an intense warmth and gives the impression of a figure happily wrapped by his surroundings, here the pure colour communicates a sense of cold loneliness. The prototype has also provoked a sort of parody of its handling; the very modern turbulence of the handwriting reminds us that van 'Gogh has been the most important source of the rough surfaces which are now so oppressively fashionable. Von Gogh was the very epitome of the autobiographical artist who transforms every experience into the terms of his own developing personality, but his legend is liable to obscure the fact that the force and energy of his work come from his constant preoccupation with pictorial problems, that the pictures dO not so much con- vey the stresses and antagonisms within himself as bring that struggle to a point of resolution and clarity. Bacon looked at the Velasquez as a spectator discovering what only the passage of centuries and historical differences could inspire and left out what is most impressive in this as in all great portraits, the disturbing contact with the imaged presence of a human creature; Velasquez was a great biographer. ,Bacon, like van Gogh, is an autobiographer and like him he paints with a naive immediacy, but whereas the intensity of the latter emerges from a fight to balance feeling, perception and method, Bacon, as the author of the journal of a disturbed man., is simply obsessed by the need to get certain images on to canvas. Some of the pictures here which rehearse earlier subjects have been painted, one feels, too late, others like the van Gogh series too early; they seem to be the expedients through which the experience has been externalised. All of them are obscure and their success with those spectators who can respond to them must be as personal as their secret origins. If one does not respond automatically to their imagery, the pic- tures are likely to seem a dilution of significant experience rather than an eloquent projection of it.

One reason for this, perhaps, is that these are private pictures built to a public scale. Here and there in the large expanses of canvas are

fragments in which the intensity has been snared and kept, surrounded by large areas ineloquently filled in. Intensity of experience—see CCzanne as.

welt as van Gogh—must' be matched by an excep- tional creative stamina. And so, as always in the past, I have admired those fragments, a loying dog, bodies swathed in grass, where the alliance between feeling, object and paint has been sealed. BASIL TAYLOR