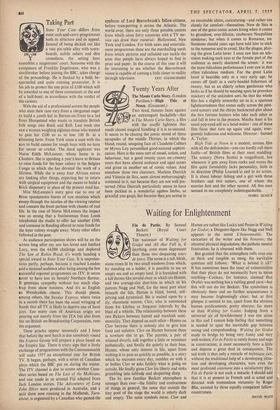 Two tired, famous faces against an extravagant backcloth—that is The Monte Carlo ,Story, a film with the soufflé lightness that needs almost magical handling if it is to, succeed. It seems to be chasing the comic mood of those escapades of the middle Thirties, in which the bland, round, unageing face of Claudette Colbert or Myrna Loy personified good-natured sophisti- cation. Here is the same sort of mood, action, and behaviour, but a good twenty years on r.. years that have altered audience and aged actors and given us another set of comic values. And somehow those two charmers, Marlene Dietrich and Vittorio de Sica, seem almost embarrassingly autumnal in it, not because they are not well pre- served (Miss Dietrich particularly seems to have been pickled in a wonderful ageless limbo, so graceful you gasp), but becauSe they are acting in

an unsuitable idiom, caricaturing—and rather too closely for comfort—themselves. Now de Sica is one of the great comic actors living when it comes to grandiose, over-lifesize, exuberant Neapolitan nonsense; but when it comes to Romance, no. Someone should years ago have told him to stick to the nonsense and to avoid, like the plague, play- ing the great Latin lover. I once saw him on tele- vision making.such eyes at the female part of the audience as nearly shattered the screen : it was the most ridiculous performance I ever saw in that often ridiculous medium. For the great Latin lover is bearable only at a very early age; he comes off (just) as a curly-headed fisherman of twenty, but as an elderly urban gentleman who looks as if he should be wearing spats he provokes mockery of the unkindest sort. So that the whole film has a slightly unworthy air to it, a spurious lightheartedness that comes sadly across the post- card scenery and the chirpy hackneyed plot about the two fortune hunters who take each other in and fall in love in. the process. Mischa Auer is his usual pop-eyed self as a head-waiter : one of those film faces that turn up again and again, ever- greenly ludicrous and welcome. Director : Samuel A. Taylor.

High Tide at Noon is a modest, serious film with all the deficiencies—you can hardly call them faults—of British films at their most middling. The scenery (Nova Scotia) is magnificent, but whenever it gets away from rocks and waves the film quite formidably lacks personality, both in its direction (Philip Leacock's) and in its actors. It is about lobster fishing and a girl with three brothers and two suitors, one of whom she marries first and the other second. All five men seemed to me completely indistinguishable.