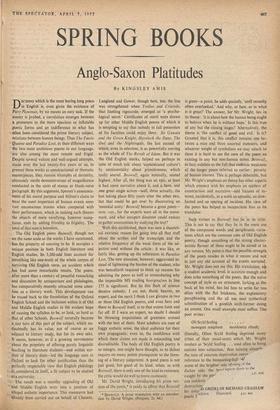 By KINGSLEY AMIS DECIDING which is the most boring long poem in English is, even given the existence of Piers Plowman, by no means an easy task. If the 'matter is probed, a correlation emerges between a proneness to the more spacious or inflatable poetic forms and an indifference to what has i• often been considered the prime literary subject, relations between human beings. Thus The Faerie ".Queene and Paradise Lost, in their different ways ' the two most ambitious poems in our language, are also among the most remote and frigid. Despite several valiant and well-argued attempts, made over the last twenty-five years or so, to present these works as constructional or thematic masterpieces, they remain triumphs of dexterity, ultimately sterile demonstrations of magnificence conducted in the units of stanza or blank-verse paragraph. By this argument,iSpenser's announce- ment of his moral purpose and Milton's claim to treat the most important of human events seem vast unconscious ironies when compared with their performance, which in making such themes the objects of mere versifying, however sump- , tuous, ends by adding frivolity to frigidity. The total of that sum is boredom.

The Old English poem Beowulf, though. not on the same scale as the works I have mentioned, has the property of seeming to be. It occupies a unique position in both English literature and English studies. Its 3,200-odd lines account for , something like one-tenth of the whole corpus of surviving Old English verse, an accident which has had some remarkable results. The poem, after more than a century of peaceful ransacking and discussion by antiquarians and philologists, has comparatively recently attracted some atten- tion as a literary work. This development can be traced back to the foundation of the Oxford English School and the inclusion within it of Old and -Middle English studies in the evident hope of causing the syllabus to be, or look, as hard as that of other Schools. Beowulf naturally became a star turn of, this part of the subject, which un- doubtedly has its value, not of course as an adjunct to literary study, but for its own sake. It seems, however, as if a growing nervousness about the propriety of offering purely linguistic teaching to literature students—and within ear- shot of literary dons—led the language men at Oxford to look for other justification than the perfectly respectable view that English philology is, considered.in itself, a fit subject to be studied tit a university.

The result was a stealthy upgrading of Old 'and Middle English texts into a position of alleged aesthetic importance. This manoeuvre had already been carried out on behalf of Chaucer, • Langland and Gower, though here, too, the line was strengthened when Troilus, and Criseyde, that footling rigmarole, emerged as 'a psycho- logical novel.' Certificates of merit were drawn up for other Middle English poems of which it is tempting to say that nobody in full possession of his faculties could enjoy them : Sir Gawain and the Green Knight, Havelock the Dane, The Owl and the Nightingale, the last named of which, even in selection, is as powerfully moving as the whole of The Revolt of Islam. But it was the Old English stocks, helped on perhaps in spite of much talk about 'sophisticated culture') by sentimentality about primitiveness,' which .really soared. Beowulf, again naturally, soared highest. After all, the thing was an epic, at least it had some narrative about it, and a hero, and one great single action—well, three actually, the last taking place fifty years after the other two, but that could be got over by discovering an `essential unity.' Beowulf became a great poem- nent. con., for the experts were all in the move- ment, and whai inexpert dissenter could endure to gather ammunition by studying the text?

With this established, there was now a theoreti- cal extrinsic reason for going into all that stuff about the scribes and the transcripts And the relative frequency of the weak form of the ad-. jective used without the article : it was like, or fairly like, getting up the references in Paradise Lost. The new situation, however, aggravated in- stead of lightening the burden of the student, who' was henceforth required to think up reasons for admiring the poem as well as remembering why the impossible MS reading hrtergtrafum in line 175 is significant. But let this flash of science deceive nobody; I am not, thank heaven, an expert, and the merit I think I can glimpse in two or three Old English poems, and even here and there in Beowulf itself, is to that extent faint and far off. If I were an expert, no doubt I should' be throwing imputations of greatness around with the best of them. Most scholars are men of foggy testhetic sense, the ideal audience for their own propaganda; even so, the confidence with which these claims are made is astounding and discreditable. The body of Old English poetry is so meagre, one might have thought, as to defeat inquiry on many points prerequisite to the form- ing of a literary judgement. A good poem is not just good, but good of its kind; when, as with Beowulf, there is only one of the kind in existence, the critic would do well to move cautiously. Mr. David Wright, introducing his prose ver- sion of_the poem,* is ready to affirm that Beowulf * BeowutP. A prose tratislatioti with ari introduc- tion by DaVid Wright. (Penguin; 2s. 6d.) is great—a point, he adds quaintly, 'until recently often overlooked.' And why, or how, or in what is it great? The answer, fot Mr. Wright, lies itt its theme : 'it is about how the human being ought to behave when he is without hope.' Is this true of any but the closing stages? Alternatively, the theme is 'the conflict of good and evil.' Is it? Granted that it is, this conflict remains one be- tween a man and three assorted monsters, and whatever weight of symbolism we may attach to these it is hard to see the core of the poem as existing in any but non-human terms. Beowulf, in fact, exhibits to the full that endemic weakness of the longer poem referred to earlier : poverty of human interest. This is perhaps debatable, but Mr. Wright's emphasis on theme has other aspects which connect with his emphasis on matters of construction and narrative—odd focuses of in- terest, incidentally, in a work so episodic, so slow- footed and so sparing of incident. His view of the poem has helped to incapacitate him as its translator.

Such virtues as Beowulf has lie in its style. This is not to say that they lie in the mere use of the compound words and periphrastic varia- tions which are the common coin of Old English poetry, though something • of the strong charac- teristic flavour of these ought to be aimed at itt any version. My point is that the possible strength of the poem resides in what it means and not in just any old account of the events narrated_ Mr. Wright does l. ,not see this. His translation, oi a student academic level, is accurate enough and does echo something of the poem. But the naive concept of style as an ornament, lurking at the back of his mind, has led him to write far too often with the flat briskness, the' explanatory paraphrasing and the all too neat syntactical subordination of a goodish sixth-former doing an unseen. One small example must suffice. The poet writes : Oft Scyld Sccfing monegum magthum meodosetla ofteah; (literally, Often Scyld Scefing deprived many tribes of their mead-seats) which Mr. Wright renders as `Scyld Sceflng . . . used often to bring, nations into subjection,' thus missing altogeth' the note of concrete deprivation conve reference to the banqueting-hall *V scene of the brighter' side il.oning of the

darker side, the aspects down to th3es . net caught by the po- can suddenly hisdestruction D GREEK) OF RICHARD CRASHAW poetic f'edition Illustrated 45s. net