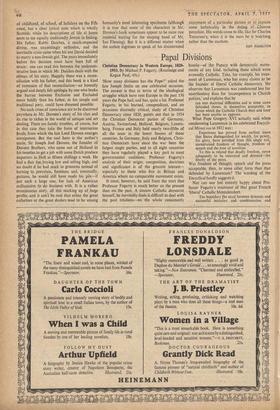 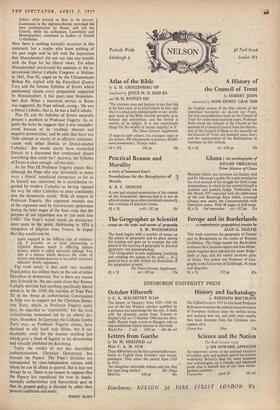 `How many divisions has the Pope?' asked the late Joseph Stalin on one celebrated occasion. The answer is that in terms of the ideological struggles which have rent Europe in the past 150 years the Pope had, and has, quite a lot. Professor Fogarty, in his learned, compendious, and on pccasions discreetly critical, study of Christian Democracy since 1820, points out that in 1954 the Christian Democrat parties of Germany, Austria, Switzerland, Holland, Belgium, Luxem- burg, France and Italy held nearly two-fifths of all the seats in the lower houses of those countries. In Germany, Italy and Belgium, Chris- tian Democrats have since the war been the largest single parties, and in all eight countries they have regularly played a key part in most governmental coalitions. Professor Fogarty's analysis of their origin, composition, doctrines and significance is of the greatest interest— especially to those who live in Britain and America where no comparable movement exists.

It must, however, be said from the start that Professor Fogarty is much better on the present than on.. the past. A sincere Catholic democrat himself, he inevitably.finds it difficult to deal with the past relations—on the whole consistently hostile—of the Papacy with detnocratic move- ments of any kind, including those which were avowedly Catholic. Take, for example, his treat- ment of •Lamennais, who has many claims to be the founder of liberal Catholic democracy. He observes that Lamennais was condemned less for unorthodoxy than for 'incompetence in Church politics,' and explains that he

ran into doctrinal difficulties and in some cases defended theses, in themselveS acceptable,' in forms which the Catholic Church then and later has been unable to approve.

What Pope Gregory XVI actually said when condemning Lamennais in his celebrated Encycli- cal Mirari vos in 1832 was :

Experience has proved from earliest times that States distinguished for wealth, for power, for glory, have perished from this single evil, unrestrained freedom of thought, freedom of speech and the love of novelties.

To this is related that deadly freedom, never adequately to be execrated and detested—the liberty of the press.

Was freedom of thought, speech and the press acceptable, then, in some other form than that defended by Lamennais? The wording of the Encyclical hardly suggests it.

Nor can one feel entirely happy about Pro- fessor Fogarty's treatment of that great French 'liberal' Catholic Montalembert.

The boundary [he says] between dynamic and successful initiative and condemnation and failure often proved as then to be narrow. Lamennais in the eighteen-thirties provoked his own condemnation by Rome, and left the Church, while his colleagues, Lacordaire and Montalembert, continued as leaders of French Catholicism.

Now there is nothing factually incorrect in this statement, but a reader who knew nothing of the past might well be left with the impression that Montalembert did not run into any trouble

with the Pope for his liberal views. Yet when Montalembert proclaimed his opinions at the in- ternational liberal Catholic Congress at Malines in 1863, Pius IX, urged on by the Ultramontane Bishop Pie, replied with the Encyclical Quanta Cura and the famous Syllabus of Errors which

condemned almost every proposition supported by Montalembert. A few years later Montalem- bert died. When a memorial service in Rome was suggested, the Pope refused, saying : 'He was a liberal Catholic; that is, he was a half-Catholic.'

Pius IX and the Syllabus of Errors naturally present a problem to Professor Fogarty. As re- gards the latter he suggests that it was misunder- stood because of its 'crabbed, obscure and negative presentation,' and he adds that there was `little attempt at clarity or at effective communi- cation with either liberals or liberal-minded Catholics.' But would clarity have reconciled liberals to a document that condemned almost everything they stood for? Anyway, the Syllabus of Errors is clear enough—all too clear.

As for Pius IX Professor Fogarty argues that, although the Pope who was 'personally in many ways a liberal' repudiated democracy as far as he himself was concerned, he is nevertheless re- garded by modern Catholics as having `opened - the way for other Catholics to enter confidently into the democratic world.' With all respect to Professor Fogarty, this argument reminds one of the argument used by Government spokesmen during the later stages of the Suez crisis that the purpose of our expedition was to 'put teeth into UNO.' The Pope's actual words on democracy seem more to the point. Addressing in 1874 a delegation of pilgrims from France, he hoped that they would soon be

again engaged in the difficult task of eliminat- ing if possible, or at least attenuating, a frightful disease which is afflicting human society, which is called universal suffrage. Yes, that is a disease which destroys the order of society and which deserves to be called 'universal delusion' (lively applause).

The truth surely is that until very recently Papal policy has seldom been on the side of either liberalism or democracy. Nor is there any reason why it should be. No one could claim that Roman Catholic doctrine had anything specifically liberal about it. In the 1920s the reaction of Pope Pius XI to the threat of authoritarian. Communism in Italy was to support not the Christian Demo- crat Party, which, as Professor Fogarty justly says, he regarded as 'expendable,' but the rival authoritarian movement led by an atheist dic- tator, Mussolini. In Germany the Catholic Centre Party' may, as Professor Fogarty claims, have declined to ally itself with Hitler, but it un- doubtedly voted for the famous enabling law which gave a cloak of legality to his dictatorship and virtually abolished the Reichstag.

Today the verdict of war has discredited authoritarianism. Christian Democracy has rescued the Papacy. The Pope's divisions are commanded by semi-independent satraps with whom he can ill afford to quarrel. But it may not always be so. There is no reason to suppose that the Papacy has repudiated for ever its funda- mentally authoritarian and hierarchical past or that .its present policy is dictated by other than present conditions and needs.