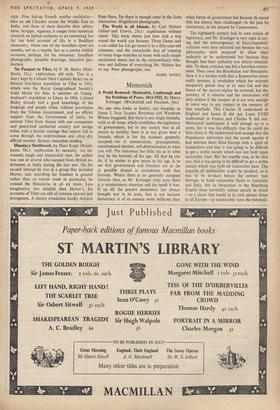 No Passport to Tibet, by F. M. Bailey (Hart- Davis,

25s.): exploration, old style. This is a diary kept by Colonel (then Captain) Bailey on an historic free-lance expedition to Tibet in 1913, which won the Royal Geographical Society's Gold Medal for him. A member of Young- husband's expedition to Lhasa in 1904, Colonel Bailey already had a good knowledge of the language and people when, without permission from the Tibetan Government, and no official support from the Government of India, he entered Tibet from Assam with one companion and penetrated uncharted country and savage tribes with a laconic courage that cannot fail to come through the unpretentious and often dry official manner. Serious, masculine reading.