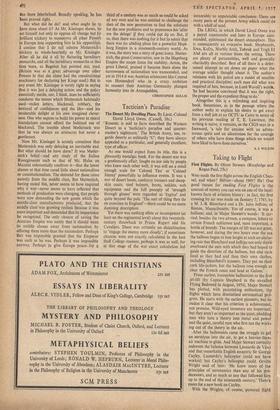 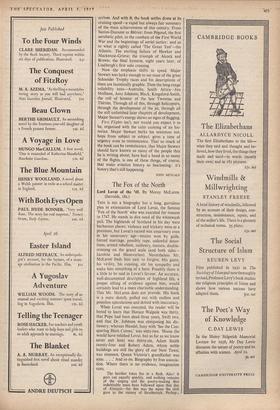 WHo made the first flight across the English Chan- nel, and when? Bleriot—about 1909? Ha? One

good reason for reading First Flights is the amount of money you can win on one of the least= known facts of aviation history : in fact, the first crossing by air was made on January 7, 1785, by a M. J.-B. Blanchard and a Dr. John Jeffries, of Boston, Massachusetts. Yes of course, it was a balloon; and, in Major Stewart's words : 'It car- ried, besides the two airmen, a compass, letters to certain French noblemen and, most important, a bottle of brandy. The margin of lift was not great, however, and during the two hours over the sea the balloon began to lose height at such an alarm- ing rate that Blanchard and Jeffries not only threw overboard the oars with which they had hoped to guide the direction of the balloon, but also such food as they had and then their own clothes, including Blanchard's trousers. They put on their cork life-jackets, but the balloon rose enough to clear the French coast and land at Guines.'

From oarless, trouserless balloonists to the first jet-lift (by Captain Shepherd in the so-called Flying Bedstead in August, 1954), Major Stewart has plotted, with painstaking enthusiasm, the flights which have dramatised aeronautical pro-- gress. He starts with the earliest pioneers; but he makes it clear that his criterion is achievement, not promise. Wild-eyed inventors are important; but they aren't as important as the quiet, plodding men who turn a theory into metal and power` and the quiet, careful men who first test the work. ing out of the theory in the air.

After the balloonists came the struggle to get an aerodyne into the air, to get a heavier-than. air machine to glide. And Major Stewart correctly redresses the balance between Leonardo de Vinci and that remarkable English eccentric Sir George Cayley. Leonardo's. helicopter could not have worked; but Cayley's helicopter could. Orville Wright said of him : 'He knew more of the principles of aeronautics than any of his pre- decessors, and as much as any that followed him up to the end of the nineteenth century.' There's room for a new book on Cayley.

With the Wrights, of course, powered flight arrives. And with it, the book settles down at its cruising speed—a rapid but always fair summary of the main achievements of this century. From Santos-Dumont to Bleriot; from Pegoud, the first acrobatic pilot, to the combats of the First World War and the beginnings of aerial tactics : and so to what is rightly called 'The Great Test'—the Atlantic. The exciting failure of Hawker and Mackenzie-Grieve; the triumph of Alcock and Brown; the final hysteria, eight years later, of Lindbergh's first solo crossing.

Now the emphasis shifts • to speed. Major Stewart was lucky enough to see most of the great Schneider Trophy races and his descriptions of them are laconically graphic. Then the long-range reliability tests—Australia, South Africa—Jim Mollison, Amy Johnson, Black, Kingsford-Smith, the roll of honour of •the late Twenties and Thirties. Through all of this, through helicopters, through the development of the jet, through all the still unfinished later chapters of development, Major Stewart's energy shows no signs of flagging.

First Flights isn't, nor would you expect it to be, organised with the calm cunning of an his- torian. Major Stewart barks his sentences out, hops from subject to subject, gives a tone of urgency even to reminiscence. That so much of the book can be reminiscence, that Major Stewart should have known so many of the people that he is writing about, have had a hand in so many of the flights, is one of these things, of course, that make aviation history so fascinating : it's history that's still happening.