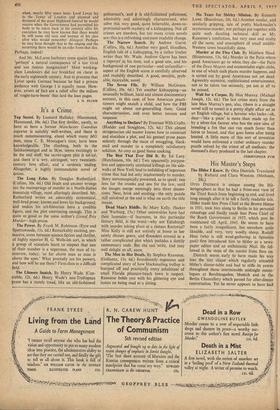 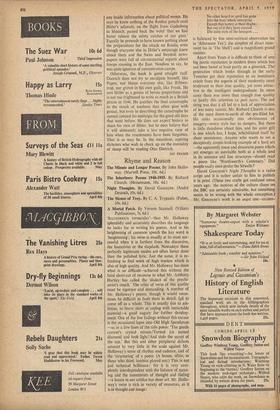 The Hitler I Knew. By Otto Dietrich. Translated by Richard and Clara Winston. (Methuen, 18s.) '

Orro DIETRICH is unique among the Hit- lerographers in that he had a front-seat view of the Third Reich from beginning to end, and lived long enough after it to tell a fairly readable tale. Hitler made him Press Chief at the Brown House in 1931, took him along to Berlin in his personal entourage and finally made him Press Chief of the Reich Government in 1937, which post he maintained till April, 1945. He seems to have been a fairly insignificant, but somehow quite likeable, and very, very woolly sheep. Rudolf Hess (who is still wool-gathering in Spandau gaol) first introduced him to Hitler as a news- paper editor and an enthusiastic Nazi He fol- lowed in the steps of the master from then on.

Dietrich seems early to have made his way into the tiny clique which regularly attended Hitler's dinner-table and had to stifle its yawns throughout those interminable midnight mono- logues at Berchtesgaden, Munich and in the Berlin Chancellery which passed for after-dinner conversation. Yet he never appears to have had

any inside information about political events. He says he knew nothing of the Roehm putsch until Hiller's adjutant, on the flight from Godesberg to Munich, passed back the word 'that we had better release the safety catches of our guns.' Equally he pretends to have known nothing about the preparations for the attack on Russia, even though everyone else in Hitler's entourage knew about them and the Swiss and Swedish news- papers were full of circumstantial reports about troops massing in the East. Needless to say, he was quite ignorant of concentration camps.

Otherwise, the book is good straight stuff. Dietrich does not try to exculpate himself, like Papen, nor blame everyone else, like Ribben- trop, nor grovel in his own guilt, like Frank. He sees Hitler as a genius of heroic proportions and is not too frightened to write as much in a British prison in 1946. He ascribes the final catastrophe to the streak of madness that often goes with genius, but even in describing the catastrophe he cannot conceal his nostalgia for the good old days that went before. He does not expect history to share his view of Hitler, but he does believe that it will ultimately take a less negative view of him when the resentments have been forgotten. That is as may be, In the meantime, aspiring dictators who wish to check up on the mentality of sheep will be reading Otto Dietrich.