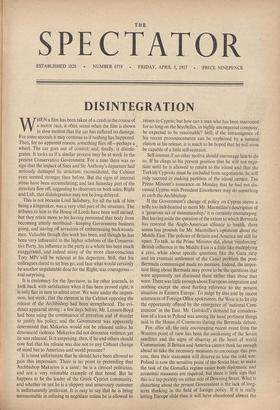 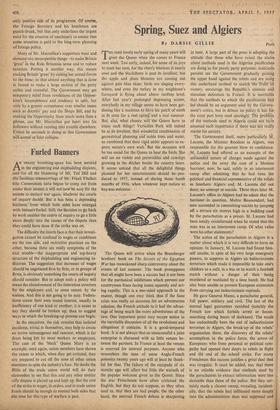 WHEN a film has been taken of a crash in the course of a motor race, it often seems when the film is shown in slow motion that the car has suffered no damage. For some seconds it may continue as if nothing has happened. Then, for no apparent reason, something flies off—perhaps a wheel. The car goes out of control; and, finally, it disinte- grates. It looks as if a similar process may be at work in the present Conservative Government. For a time there was no sign that the impact of Suez and Sir Anthony's departure had seriously damaged its structure; reconstituted, the Cabinet even seemed stronger than before. But the signs of internal stress have been accumulating; and last Saturday part of the structure flew off; suggesting to observers on both sides, Right and Left, that disintegration may not be long delayed.

This is not becauke Lord Salisbury, for all the talk of him being a kingmaker, was a very vital part of the structure. The tributes to him in the House of Lords have been well earned, but they relate more to his having prevented that body from becoming utterly moribund—keeping Government business going, and staving off invasions of embarrassing backwoods- men. Valuable though this work has been, and though he has been very influential in the higher echelons of the Conserva- tive Party, his influence in the party as a whole has been much exaggerated, and indeed many of the more class-conscious Tory MPs will be relieved at his departure. Still, that his colleagues dared to let him go, and face what would certainly be another unpalatable dose for the Right, was courageous— and surprising.

It is customary for the Spectator, as for other journals, to look back with satisfaction when it has been proved right; it is only fair in turn to admit error. We were under the impres- sion, last week, that the element in the Cabinet opposing the release of the Archbishop had been strengthened. The evi- dence appeared strong : a few days before, Mr. Lennox-Boyd had been using the continuance of terrorism and of murder to justify his policy; and the Government was apparently determined that Makarios would not be released unless he denounced violence. Makarios did not denounce violence; yet he was released. I's it surprising, then, if he and others should now feel that his release was due not to any Cabinet change of mind but to American and world pressure?

It is most unfortunate that he should have been allowed to gain this impression. There is no point in pretending that Archbishop Makarios is a saint : he is a clerical politician, and not a very estimable example of that breed. But he happens to be the leader of the Greek Cypriot community, and whether or not he is a slippery and unsavoury customer is unfortunately irrelevant. It is easy to say that he is being unreasonable in refusing to negotiate unless he is allowed to return to Cyprus; but how can a man who has been marooned for so long on the Seychelles, in highly uncongenial company, be expected to be reasonable? Still, if the intransigence of his recent pronouncements can be explained by a natural elation at his release, it is much to be hoped that he will soon be capable of a little self-restraint.

Self-interest if no other motive should encourage him to do so. If he clings to his present position that he will not nego- tiate until he is allowed to return to the island and that the Turkish Cypriots must be excluded from negotiation, he will only succeed, in making partition of the island certain. The Prime Minister's assurance on Monday that he had not dis- cussed Cyprus with President Eisenhower may do something to curb the Archbishop.

If the Government's change of policy on Cyprus seems a trifle too half-hearted to merit Mr. Macmillan's description of a 'generous act of statesmanship,' it is certainly encouraging.

But leaving aside the question of the extent to which Bermuda has restored the Anglo-American alliance to health, there seems less grounds for Mr. Macmillan's optimism about the Middle East. The policies of Britain and America are still far apart. To talk, as the Prime Minister did, about 'reinforcing' British influence in the Middle East is a little like multiplying a zero, while about specific questions like the Gaza strip and an eventual settlement of the Canal problem the post- Bermuda communiqué made no mention. Indeed, the impor- tant thing about Bermuda may prove to be the questions that were apparently not discussed there rather than those that were. There was little enough about European integration and nothing except the most fleeting reference to the present situation in Eastern Europe. To judge by this and by recent utterances of Foreign Office spokesmen, the West is to let slip the opportunity offered by the emergence of 'national Com- munism' in the East. Mr. Gaitskell's demand for considera- tion of a loan to Poland was among the most pertinent things said in the House of Commons during the Bermuda debate. For, after all, the only encouraging recent event from the Western point of view has been the awakening of the Soviet satellites and the signs of disarray at the heart of world Communism. If Britain and America cannot think far enough ahead to take the necessary measures to encourage this pro- cess, then their statesmen will deserve to lose the cold war. Poland is now the sensitive point of the Soviet bloc; to make the task of the. Gomulka regime easier both diplomatic and economic measures are required, but there is little sign that this is.a top priority on either side of Downing Street. What is disturbing about the present Government is the lack of long- term thinking in the field of foreign policy. If it is really letting Europe slide then it will have abandoned almost the only positive side of Wits programme. Of course, the Foreign Secretary and his henchmen are punch-drunk, bUt ihat only underlines the urgent need for the creation of machinery to ensure that some attention is paid to the long-term planning of foreign policy.

Many of Mr. Macmillan's suppoiters want and demand two incompatible things—to make Britain -great' in the Rule Britannia sense and to reduce taxation. Putting it another, way, this means making Britain 'great' by cutting her armed forces to the bone; so that almost anything that is done is bound to make a large section of the party sullen and resentful. The Government may get temporary relief from revelations of the Opposi- tion's incompetence and tendency to split, but -only by a greater competence over smaller issues such as doctors' pay and the Shops Bill, and by Making the Opportunity State much more than a phrase, can Mr. Macmillan put heart into his followers without running into trouble elsewhere. Cnlesi he succeedS in doing so this Government yAllioonei or'later collaPse.