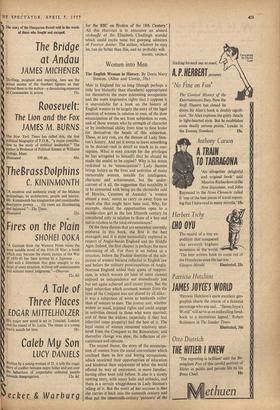 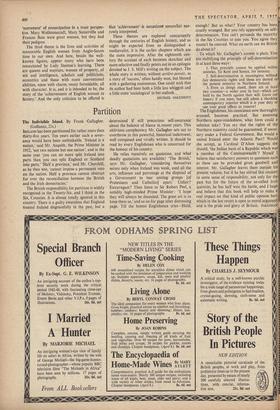 The English Woman in History. By Doris Mary Stenton. (Allen and Unwin, 35s.)

MEN in England for so long (though perhaps a little less blatantly than elsewhere) appropriated for themselves the more interesting occupations and the more impressive rights that I suppose it is unavoidable for a book on the history of English women to be largely the story of the legal position of women in relation to men, of the slow emancipation of the sex from subjection to men, and of those women who by strength of character or by intellectual ability from time to time broke for themselves the bands of this subjection. These, at any rate, are the themes of Lady Sten- ton's history. And yet it seems to leave something to be desired—not in detail so much as in con- ception. What is man (except for the privileges he has arrogated to himself) that .he should be made the model to be copied? Why is his status reckoned to be `emancipation'? Lady Stenton brings before us the lives and activities of many memorable women, notable for intelligence, character and achievement, but the under- current of it all, the suggestion that notability is to be connected with being (as the chronicler said of Hawisa, Countess of Aumale) 'a woman almost a man,' seems to carry us away from so much else that might have been said. Why, for example, should the opportunities open to a middle-class girl in the late fifteenth century be considered only in relation to those of a boy and not in relation to the total circumstances?

Of the three themes that are somewhat unevenly explored in this book, the first is the best managed; and it is most successfully explored in respect of Anglo-Saxon England and the Middle Ages. Indeed, the first chapter is perhaps the most interesting of all. For there is set before us a situation, before the Pauline doctrine of the sub- jection of women became reflected in English law and before the military preoccupations of Anglo- Norman England added their quota of suppres- sion, in which women (at least of some classes) enjoyed an independence not immediately lost but not again achieved until recent times. But the legal subjection which overtook women from the time of the Conquest was not shared .by all alike : it was a subjection of wives to husbands rather than of women to men. The femme sole, whether widow or maid, enjoyed rights and could engage in activities denied to those who were married; and of these the widows (especially if they had inherited some property) had the best of it. The legal status of women remained relatively unal- tered from the Conquest to the Restoration; and thereafter change was slow, the reflection of cir- cumstance and opinion.

The second theme, the story of the emancipa- tion of women from the social conventions which confined them to few and boring occupations, which restricted their opportunities of education and hindered their enjoyment of what the world offered by way of enjoyment, is more familiar, having often been told before. It also is a slowly moving story, with many 'halts and setbacks, and there is a certain whiggishness in Lady Stenton's telling of it. But the merit of her account is that she carries it back into the sixteenth century and thus put the nineteenth-century 'pioneers' of the 'movement' of emancipation in a truer perspec- tive. Mary Wollstonecraft, Mary Somerville and Frances Buss were great women, but they had their pedigree.

The third theme is the lives and activities of memorable English women from Anglo-Saxon time to our own. And here, beside the well- known figures, appear many who have been resuscitated by Lady Stenton's learning. There are queens and warriors, women of property, of wit and intelligence, scholars and politicians, eccentrics and those with more conventional abilities, some with charm, many formidable, all with character. It is, and it is intended to be, the story of the 'achievements of English women in history.' And the only criticism to be offered is that 'achievement' is sometimes' somewhat nar- rowly interpreted.

These themes are explored concurrently through the centuries of English history, and as might be expected from so distinguished a medievalist, it is the earlier chapters which are the more impressive. After the eighteenth cen- tury the account of each becomes sketchier and more selective and finally peters out in an epilogue devoted to J. S. Mill's writing on the subject. The whole story is written, without arriere-pensee, as a story of 'success,' often hardly won, but blessed with a gathering momentum. One could wish that its author had been both a little less whiggish and a little more 'sociological' in her outlook.