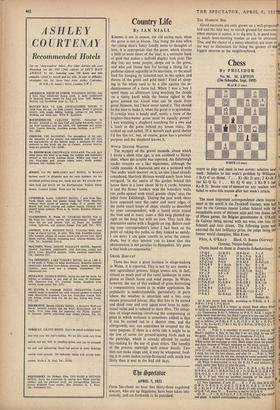 The mystery of the gravel mounds, about which I wrote a short time ago, is not confined to Hamp- shire, where the trouble was reported. An Edinburgh reader remarks on a like experience, although the riddle remains. A humorist sent me a postcard with 'See under witch doctors' on it, an idea I had already considered. Sherlock Holmes would surely have been intrigued. 'In the centre of the garden behind this house there is a lawn about 30 by 6 yards; between it and the flower borders next the boundary walls run paths spread with small granite chips,' says the letter from Edinburgh. 'During the past week there have appeared near the outer and inner edges of the paths small heaps of chips, exactly as described by your correspondent, with a bared circle round the base and in many cases a thin twig planted up- right on the heap but with no root. They look like diminutive cairns with a flagpole on top. Before read- ing your correspondent's letter I had been on the point of raking the paths, as they looked so untidy. 1 am sorry I am quite unable to solve the conun- drum, but it may interest you to know that this phenomenon is not peculiar to Hampshire. My guess is that birds are responsible.'