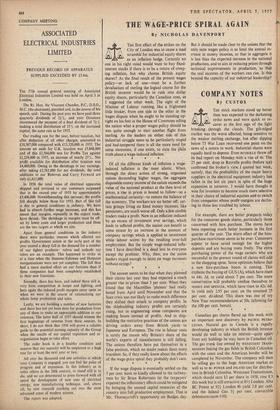 By NICHOLAS DAVENPORT THE first effect of the strikes on the City of London was to cause a mad scramble for industrial equity shares as an inflation hedge. Certainly no one in his right mind would want to buy fixed- interest stocks if there is to be a return of creep- ing inflation, but why choose British equity shares? As the final result of the present wages policy—or lack of one—must be a. further devaluation of sterling the logical course for the British investor would be to rush into dollar equity shares, particularly the Canadian ones, as I suggested the other week. The sight of the Minister of Labour running, like a frightened little broker, from one side to the other in the wages dispute when he ought to be standing up- right on his feet in the House of Commons telling the nation what a proper wages policy should be was quite enough to start another flight from sterling. As the leaders on either side of this industrial struggle seem to be particularly stupid and bad-tempered there is all the more need for some statesman, if one exists, to state the Plain truth about a wage-induced inflation.

Of all the different kinds of inflation a wage induced inflation is the' most idiotic. When, through the direct action of strong, organised unions demanding higher wages, the aggregate disposable money income of the nation exceeds.the value of the national product at the then level of prices, a rise in prices is bound to follow—as a mathematical certainty—to restore the balance of the economy. The workers are no better off; cer- tain groups living on fixed money incomes, like pensioners, are much worse off. Only a few nimble traders make a profit. Now in an inflation induced by an excess of investment over savings, which leads to inflated profits, the nation can benefit to some extent by an increase in the amount of company savings which is applied to investment while labour scores by the resulting 'over-full employment. But the simple wage-induced infla- tion I have described is a dead loss to everyone except the profiteer. Why, then, are the union leaders stupid enough to insist on wage increases without strings?

The answer seems to be that when they planned their claims last year they had expected a much greater rise in prices than 3 per cent. When they found that the, Macmillan 'plateau' had really lasted from April until November and that the Suez crisis was not likely to make much difference they shifted their attack to company profits. In the shipbuilding industry profits are certainly rising, but in engineering some. companies are making losses instead of profits. And in ship- building the restrictive practices of the unions are driving orders away from British yards to Japanese and European. The rise in labour costs is surely the reason why Britain's share of the world's exports of manufactures is still falling. The unions therefore have put themselves in a false position, which no doubt makes them more truculent. So, if they really know about the effects of the wage-price spiral they probably don't care.

* * * If the wage dispute is eventually settled on the 5 per cent. basis so kindly allowed to the railway- men by Sir Brian Robertson (at the taxpayers' expense) the inflationary effects could be mitigated by bringing the unused capital resources of the country into full productive employment. That is Mr. Thorneycroft's opportunity on Budget day.

But it should be made clear to the unions that the only sane wages policy is to limit the annual in- crease in money incomes, so that in aggregate it is less than the expected increase in the national production, and to aim at reducing prices through technical improvements in production, so that the real incomes of the workers can rise. Is this beyond the capacity of our industrial leadership?