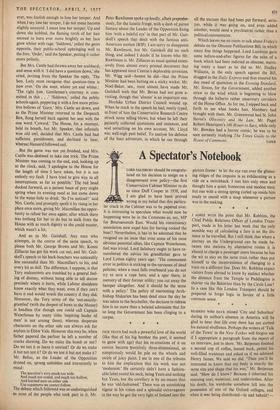 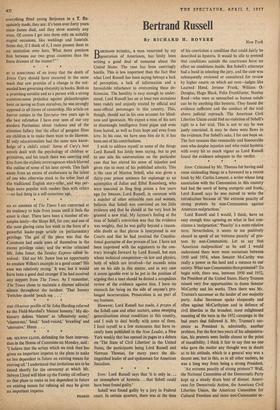 Page 7, 5 April 1957 — READERS WHO HAVE missed 'City and Suburban' during its author's
Close

READERS WHO HAVE missed 'City and Suburban' during its author's

absence in America will be glad to hear that life over there has not curbed his natural ebullience. Perhaps the writers of 'Talk of the Town' in the New Yorker will forgive me if I appropriate a paragraph from the report of an interview, just to show. 'Mr. Betjeman finished a second cup of coffee, leaned back, patted his well-filled waistcoat and asked. us if we admired Henry James. We said we did. "Then you'll be interested to know that my body is exactly the same size and shape that his was," Mr. Betjeman said. "How do I know? Because I inherited his morning coat, waistcoat, and underclothes. After his death, his wardrobe somehow fell into the possession of one of the Oxford colleges, and when it was being distributed—lo and behold !-- everything fitted young Betjeman to a T. Ex- quisitely made, they are; it's been over forty years since James died, and they show scarcely any wear. Of course I get into them only on suitably august occasions, like weddings and funerals. Some day, if I think of it, I must present them to an institution over here. What more precious link between our two great countries than the linen drawers of the master?"'