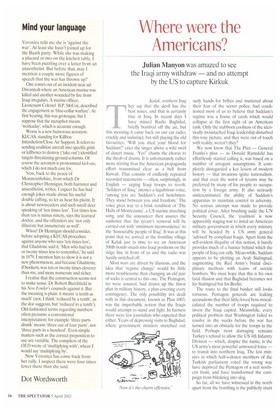 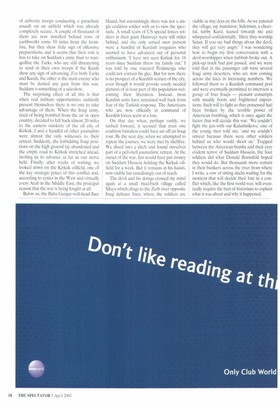 Where were the Americans?

They say that the devil has the best tunes, and that is certainly true in Iraq. In recent days I have missed Radio Baghdad, briefly bombed off the air, but this morning it came back on our car radio, crackly and indistinct, but still playing the old favourites. 'Will you shed your blood for Saddam?' cries the singer above a wild swirl of desert music. 'Yes!' chants the chorus to the throb of drums. It is unfortunately rather more stirring than the American propaganda effort transmitted clear as a bell from Kuwait. That consists of endlessly repeated recorded statements — often, surprisingly, in English — urging Iraqi troops to revolt. 'Soldiers of Iraq.' intones a lugubrious voice, 'among you are Saddam's evil henchmen. They stand between you and freedom.' The voice gives way to a brisk rendition of 'The Halls of Montezuma', a US marine marching song, and the announcer then assures the audience that the tyrant's removal will be carried out with 'minimum inconvenience' to the 'honourable people of Iraq'. It was at this point that we arrived at the frontline village of Kaiak just in time to see an American 5001b bomb smash into Iraqi positions on the ridge line in front of us and the radio was hastily switched off.

Most wars are driven by illusions, and the idea that 'regime change' would be little more troublesome than changing an old pair of socks is central to this one. The Pentagon, we were assured, had drawn up the finest plan in military history. a plan covering every contingency. The only possibility not dealt with in this document, known as Plan 1003, was the improbable notion that the Iraqis would attempt to stand and fight. In fairness there were few journalists who expected that either. Years of depressing visits to Baghdad, where government minders stretched out surly hands for bribes and muttered about their fear of the secret police, had conditioned most of us to believe that Saddam's regime was a house of cards which would collapse at the first sight of an American tank. Only the stubborn coolness of the identically moustached Iraqi leadership disturbed this rosy picture, and they were out of touch with reality, weren't they?

We now know that The Plan — General Franks's plan — as Donald Rumsfeld has effortlessly started calling it, was based on a number of arrogant assumptions. It completely disregarded a key lesson of modern history — that invasions ignite nationalism. and that even the worst of tyrants may be preferred by many of his people to occupation by a foreign army. It also seriously underestimated the ability of Saddam's apparatus to maintain control in adversity. No serious attempt was made to provide political cover. After brushing aside the UN Security Council, the 'coalition' is now apparently waging war to instal an American military government in which every ministry will be headed by a US army general 'advised' by compliant Iraqis. Apart from the self-evident illegality of this notion, it hardly provides much of a banner behind which the people of Iraq can rally. Mean-while, Saddam appears to be plotting an Arab Stalingrad, augmenting the Red Army's brutal disciplinary methods with teams of suicide bombers. We must hope that this is his own fatal illusion and that Baghdad becomes not his Stalingrad but his Berlin.

The route to the final bunker still looks tortuous. Pentagon generals are leaking accusations that their little-loved boss miscalculated the number of troops required to invest the Iraqi capital. Meanwhile, every political problem that Washington failed to resolve in the weeks before the war has turned into an obstacle for the troops in the field. Perhaps most damaging remains Turkey's refusal to allow the US 4th Infantry Division — which, despite the name, is the US army's most powerful armoured force — to transit into northern Iraq. The few minutes in which half-a-dozen members of the Turkish parliament voted the wrong way have deprived the Pentagon of a real northern front, and have transformed the campaign from blitzkrieg into slog.

So far, all we have witnessed in the north apart from the bombing is the publicity stunt of airborne troops conducting a parachute assault on an airfield which was already completely secure. A couple of thousand of them are now installed behind rows of earthworks some 50 miles from the frontline, hut they show little sign of offensive preparations, and it seems that their role is less to take on Saddam's army than to tranquillise the Turks, who are still threatening to send in their own troops if the Kurds show any sign of advancing. For both Turks and Kurds, the other is the main enemy who must be denied any gain from this war. Saddam is something of a sideshow.

The surprising effect of all this is that when real military opportunities suddenly present themselves there is no one to take advantage of them. When the Iraqi army, tired of being bombed from the air in open country, decided to fall back almost 20 miles to the eastern outskirts of the oil city of Kirkuk, I and a handful of other journalists were almost the only witnesses to their retreat. Suddenly, the forbidding Iraqi positions on the high ground lay abandoned and the empty road to Kirkuk stretched ahead, inviting us to advance as far as our nerve held. Finally, after weeks of waiting, we looked down on the Kirkuk oilfield, one of the key strategic prizes of this conflict and, according to cynics in the West and virtually every Arab in the Middle East, the principal reason that the war is being fought at all.

Below us, the Baba Gurg-ur well-head flare blazed, but astonishingly there was not a single coalition soldier with us to view the spectacle. A small team of US special forces soldiers in their giant Humvees were still miles behind, and the only armed men present were a handful of Kurdish irregulars who seemed to have advanced out of personal enthusiasm. 'I have not seen Kirkuk for 18 years since Saddam threw my family out,' I was told by one wizened Peshmerga who could not contain his glee. But for now there is no prospect of a Kurdish seizure of the city, even though it would provide sorely needed pictures of at least part of the population welcoming their liberation. Instead, most Kurdish units have remained well back from fear of the Turkish response. The Americans who are now officially in command of Kurdish forces seem at a loss.

On that day when, perhaps rashly, we rushed forward, it seemed that even one coalition battalion could have set off an Iraqi rout. By the next day, when we attempted to repeat the journey, we were met by shellfire. We dived into a ditch and found ourselves part of a pell-mell journalistic retreat. At the outset of the war, few would have put money on Saddam Hussein holding the Kirkuk oilfield for a week. But it remains in his hands, now visible but tantalisingly out of reach.

The devil and his doings crossed my mind again at a small mud-built village called Sifaya which clings to the Zarb river opposite Iraqi defence lines, where the soldiers are

visible as tiny dots on the hills. As we entered the village, my translator, Suleiman, a cheerful, tubby Kurd, leaned towards me and whispered confidentially, 'Here they worship Satan. If you say bad things about the devil, they will get very angry.' I was wondering how to begin my first conversation with a devil-worshipper when hubbub broke out. A pick-up truck had just passed, and we were told that in the passenger cab were several Iraqi army deserters, who are now coming across the lines in increasing numbers. We followed them to a Kurdish command post and were eventually permitted to interview a group of four Iraqis — peasant conscripts with muddy boots and frightened expressions. Such will to fight as they possessed had been broken by the terrible power of American bombing, which is once again the factor that will decide this war. 'We couldn't fight the jets with our Kalashnikovs,' one of the young men told me, 'and we couldn't retreat because there were other soldiers behind us who would shoot us.' Trapped between the American bombs and their very evident terror of Saddam Hussein, the four soldiers did what Donald Rumsfeld hoped they would do. But thousands more remain in their bunkers across the river from where I write, a row of sitting ducks waiting for the moment that will decide their fate in a conflict which, like the first world war, will eventually require the best of historians to explain what it was about and why it happened.