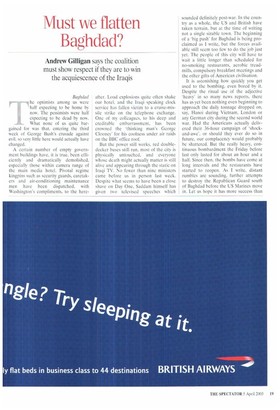 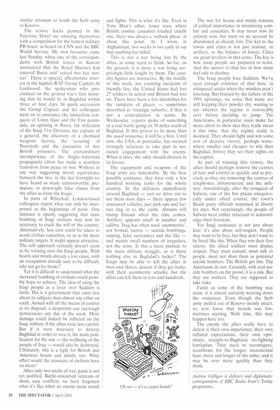 AL What none of us quite bargained for was that, entering the third week of George Bush's crusade against evil, so very little here would actually have changed.

A certain number of empty government buildings have, it is true, been efficiently and dramatically demolished, especially those within camera range of the main media hotel. Pivotal regime kingpins such as security guards, caretakers and air-conditioning maintenance men have been dispatched, with Washington's compliments, to the here

after. Loud explosions quite often shake our hotel, and the Iraqi speaking clock service has fallen victim to a cruise-missile strike on the telephone exchange. One of my colleagues, to his deep and creditable embarrassment, has been crowned the 'thinking man's George Clooney for his coolness under air raids on the BBC office roof.

But the power still works, red doubledecker buses still run, most of the city is physically untouched, and everyone whose death might actually matter is still alive and appearing through the static on Iraqi TV. No fewer than nine ministers came before us in person last week. Despite what seems to have been a close shave on Day One, Saddam himself has given two televised speeches which sounded definitely post-war. In the country as a whole, the US and British have taken terrain, but at the time of writing not a single sizable town. The beginning of a 'big push' for Baghdad is being proclaimed as I write, but the forces available still seem too few to do the job just yet. The people of this city will have to wait a little longer than scheduled for no-smoking restaurants, aerobic treadmills, compulsory breakfast meetings and the other gifts of American civilisation.

It is astonishing how quickly you get used to the bombing, even bored by it. Despite the ritual use of the adjective 'heavy' in so many news reports, there has as yet been nothing even beginning to approach the daily tonnage dropped on, say, Hanoi during Vietnam, London or any German city during the second world war. Had the Americans actually delivered their 36-hour campaign of 'shockand-awe', or should they ever do so in future, our complacency would probably be shattered. But the really heavy, continuous bombardment the Friday before last only lasted for about an hour and a half. Since then, the bombs have come at long intervals and the restaurants have started to reopen. As I write, distant rumbles are sounding, further attempts to destroy the Republican Guard south of Baghdad before the US Marines move in. Let us hope it has more success than similar attempts to bomb the Serb army in Kosovo.

The restive hacks penned in the Palestine Hotel are amusing themselves with a competition for the lamest military PR boast, as heard on CNN and the BBC World Service. My own favourite came last Sunday, when one of the correspondents with British forces in Kuwait announced that the Royal Marines had entered Basra and 'seized two key statues'. There is special, affectionate interest in the hapless RAF Group Captain Al Lockwood, the spokesman who proclaimed on the ground war's first morning that he would be in Baghdad within three or four days. In quick succession the Group Captain and his colleagues went on to announce the immediate conquest of Umm Qasr and the Faw peninsula, an uprising in Basra, the defection of the Iraqi 51st Division, the capture of a general, the discovery of a chemical weapons factory, the 'securing' of Nasiriyah and the execution of two British prisoners. The extraordinary incompetence of the Anglo-American propaganda effort has made a seamless transition from peace to war. Without in any way suggesting moral equivalence between the two, in the last fortnight we have heard as many untrustworthy, premature or downright false claims from the allies as from the Iraqis.

In parts of Whitehall, London-based colleagues report what can only be interpreted as the beginnings of panic. One minister is openly suggesting that mass bombing of Iraqi civilians may now be necessary to crack the will of the country. Alternatively, less care could be taken to avoid civilian casualties, so as to hit more military targets. It might appear attractive. The soft approach certainly doesn't seem to be winning over the Iraqi people. With hearts and minds already a lost cause, with an occupation already sure to be difficult, why not go for broke?

Yet it is difficult to understand what the increased bombing of civilians could possibly hope to achieve. The idea of using the Iraqi people as a lever over Saddam is futile. His is a government that cares less about its subjects than almost any other on earth. Armed with all the means of control at its disposal, a despotism can out-tough democracies any day of the week. More damage could indeed be inflicted on the Iraqi military if the allies were less careful. But if it were necessary to destroy Baghdad in order to save it, the main justification for the war — the wellbeing of the people of Iraq — would also be destroyed. Ultimately, this is a fight for British and American hearts and minds, too. What effect would the massacre of civilians have on them?

After only two weeks of war, panic is not yet justified. Battle-unscarred veterans of short, easy conflicts, we have forgotten what it's like when an enemy turns round and fights. This is what it's like, Even in Tony Blair's other, lesser wars. where British combat casualties totalled exactly one, there was always a 'setback phase' at about this point. As I wrote in Afghanistan, two weeks is too early to say that anything has failed.

This is not a war being lost by the allies, as some seem to think. So far, on the ground, it is more a war being surprisingly little fought by them. The casualty figures are instructive. By the middle of this week, not counting incidents of friendly fire, the United States had lost 27 soldiers in action and Britain had lost six. There have been a few skirmishes for the outskirts of places — sometimes described as 'strategic suburbs', if that is not a contradiction in terms. By Wednesday, reports spoke of something of a real battle going on 50 miles south of Baghdad. If this proves to be more than the usual nonsense, it will be a first. Until now, the USA, in particular, has seemed strangely reluctant to take part in sustained engagement with the enemy. When it does, the odds should shorten in its favour.

The equipment and weapons of the Iraqi army are lamentable. By the best possible estimates, they have only a few hundred working tanks for the whole country. In the defences immediately around Baghdad — and we drive out to see them most days — there appear few armoured vehicles, just pick-ups and lorries dug in to the earth. Abrams will trump Datsun when the time comes. Artillery appears small in number and calibre. Iraq has often used 'asymmetric', not frontal, tactics — suicide bombings, sniping, false surrenders and the like — and mainly small numbers of irregulars, not the army. Is this a mere prelude to the main military struggle, or is there nothing else in Baghdad's locker? The Iraqis may be able to kill the allies in twos and threes, dozens if they get lucky, with their asymmetric attacks; but the allies can kill them in tens and hundreds. The war for hearts and minds remains of critical importance in minimising combat and casualties. It may never now be entirely won, but must on no account be abandoned as already lost. The key to the towns and cities is not just armour, or artillery, or the balance of forces. Cities are great levellers in that sense. The key is how many people are prepared to resist. And the answer to that lies in how many feel safe to disobey.

The Iraqi people hate Saddana. We've seen enough evidence of that here, in whispered asides when the minders aren't listening. But bruised by the failure of the 1991 uprisings, we sense that many are still keeping their powder dry, waiting to see whether the regime is irrevocably over before deciding to jump. The Americans, in particular, must make far more effort to show that they really mean it this time, that the regime really is doomed. They should fight and win some sort of decisive victory, perhaps somewhere smaller and cheaper to win than Baghdad, before they set their sights on the capital.

As part of winning this victory, the allies should perhaps remove the centres of fear and control as quickly and as precisely as they are removing the centres of telephones, infrastructure and the military. Astonishingly, after the conquest of Safwan, one of the few places unequivocally under allied control, the town's Baath party officials remained at liberty for days. Not surprisingly, the people of Safwan were rather reluctant to acknowledge their freedom.

Yet Iraqi resistance is not just about fear; it's also about self-respect. People may want to be free, but they don't want to be freed like this. When they win their first victory, the allied soldiers must display respect. They must consult, must talk to people, must not shun them as potential suicide bombers, The British get this. The Americans do not. Certainly, with real suicide bombers on the prowl, it is a risk. But they are soldiers. They are supposed to take risks.

Futile as some of the bombing may seem, it is almost certainly wearing down the resistance. Even though the Serb army pulled out of Kosovo mostly intact, we now know that morale was low, mutinies starting. With time, this may happen here too.

The enemy the allies really have to defeat is their own impatience, their own inflated expectations, their own optimistic, straight-to-Baghdad, no-fighting battleplan. They need to reconfigure, recalibrate for the longer, incremental haul, more and longer of the same; and it may be over more quickly than they think.