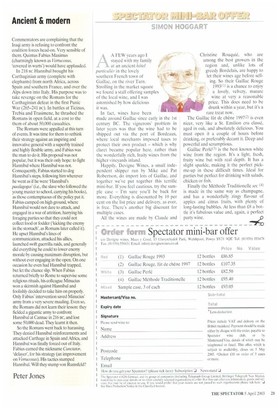 Commentators are complaining that the Iraqi army is refusing to confront the coalition forces head-on. Very sensible of them, Quintus Fabius Maximus (charmingly known as Verrucosus, 'covered in warts') would have applauded.

In 218 BC Hannibal brought his Carthaginian army (complete with elephants) from north Africa, across Spain and southern France, and over the Alps down into Italy. His purpose was to take revenge on the Romans for the Carthaginian defeat in the first Punic War (265-241 BC). In battles at Ticinus, Trebia and Trasimene, he thrashed the Romans in open field, at a cost to the them of about 50,000 casualties.

The Romans were appalled at this turn of events. It was time for them to rethink their strategy against an inspiring and innovative general with a superbly trained and highly flexible army, and Fabius was the man to do it. His proposal was not popular, but it was their only hope: to fight Hannibal where Hannibal was not Consequently, Fabius started to dog Hannibal's steps, following him wherever he went as if he were 'Hannibal's paedagogus' (i.e., the slave who followed the young master to school, carrying his books), as those contemptuous of the policy put it. Fabius camped on high ground, where Hannibal would not dare to attack, and engaged in a war of attrition, harrying his foraging parties so that they could not collect food or fodder (kicking the enemy in the stomach', as Romans later called it). He upset Hannibal's lines of communication, attacked his allies, launched swift guerrilla raids, and generally did everything he could to lower enemy morale by causing maximum disruption, but without ever engaging in the open. On one occasion he even had Hannibal trapped, but let the chance slip. When Fabius returned briefly to Rome to supervise some religious rituals, his colleague Minucius won a skirmish against Hannibal and foolishly decided to take him on properly. Only Fabius' intervention saved Minucius' army from a very severe mauling. Even so, the Romans did not learn their lesson: they fielded a gigantic army to confront Hannibal at Cannae in 216 BC, and lost some 50,000 dead. They learnt it then.

So the Romans went back to harassing. They denied Hannibal reinforcements and attacked Carthage in Spain and Africa, and Hannibal was finally forced out of Italy. Fabius earned the nickname Cunctator, 'delayer', for his strategy (an improvement on Verrucosus). His tactics stumped Hannibal. Will they stump von Rumsfekl?