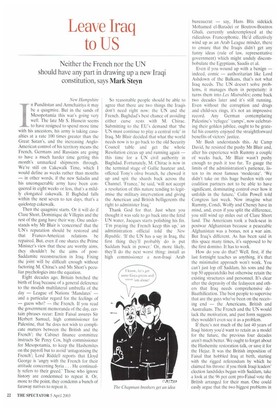 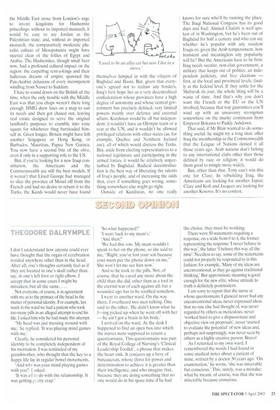 Leave Iraq to US

Neither the French nor the UN

should have any part in drawing up a new Iraqi constitution, says Mark Steyn New Hampshire In Punditstan and Armchairiya it may be a quagmire. But in the sands of Mesopotamia this war's going very well. The late Mr S. Hussein seems to have resigned to spend more time with his ancestors, his army is taking casualties at a rate 100 times greater than the Great Satan's, and the increasing AngloAmerican control of his territory means the French, Germans and Russians are going to have a much harder time getting this month's unmarked shipments through. We're still on Cakewalk Time, which I would define as weeks rather than months — in other words, if the new Saladin and his unconquerable army have been conquered in eight weeks or less, that's a mildly elongated cakewalk. If Baghdad falls within the next seven to ten days, that's a quickstep cakewalk.

Then the quagmire starts. Or it will do if Clare Short, Dominique de Villepin and the rest of the gang have their way. One understands why Mr Blair is 'concerned' that the UN's reputation should be restored and that Franco-American relations be repaired. But, even if one shares the Prime Minister's view that these are worthy aims, they shouldn't be the aims of postSaddamite reconstruction in Iraq. Fixing the joint will be difficult enough without factoring M. Chirac's and Ms Short's peculiar psychologies into the equation.

Eight decades ago, Britain botched the birth of Iraq because of a general deference to the modish multilateral umbrella of the day — League of Nations 'Mandates' — and a particular regard for the feelings of — guess who? — the French. If you read the government memoranda of the day, certain phrases recur: Emir Faisal assures Sir Herbert Samuel, high commissioner for Palestine, that 'he does not wish to complicate matters between the British and the French': the Cabinet finance committee instructs Sir Percy Cox, high commissioner for Mesopotamia, to keep the Hashemites on the payroll but to avoid 'antagonising the French': Lord Riddell reports that Lloyd George is 'angry with the French for their attitude concerning Syria . . . He continually refers to their greed.' Those who ignore history are condemned to repeat it. Or, more to the point, they condemn a bunch of faraway natives to repeat it. So reasonable people should be able to agree that there are two things the Iraqis don't need right now: the UN and the French. Baghdad's best chance of avoiding either curse rests with M. Chirac. Submitting to the EU's demand that `the UN must continue to play a central role' in Iraq, Mr Blair decided that what the world needs now is to go back to the old Security Council table and get the whole Resolution circus up and running again — this time for a UN civil authority in Baghdad. Fortunately, M. Chirac is now in the terminal stage of Gallic hauteur and, offered Tony's olive branch, he chewed it up and spit the shards back across the Channel. 'France,' he said, 'will not accept a resolution of this nature tending to legitimise the military intervention and giving the American and British belligerents the right to administer Iraq.'

Thank God for that. Just when you thought it was safe to go back into the fetid UN water, Jacques starts polishing his fin. 'I'm praying the French keep this up,' an administration official told the New Republic. 'If the UN has a say in Iraq, the first thing they'll probably do is put Saddam back in power.' Or, more likely, they'll do the next worst thing: install as high commissioner a non-Iraqi Arab

bureaucrat — say, Hans Blix sidekick Mohamed el-Baradei or Boutros-Boutros Ghali, currently underemployed at the ridiculous Francophonie. He'd effectively wind up as an Arab League minder, there to ensure that the Iraqis didn't get any funny ideas (rule of law, representative government) which might unduly discombobulate the Egyptians, Saudis et al.

Even if you wound up with a benign — indeed, comic — authoritarian like Lord Ashdown of the Balkans, that's not what Iraq needs. The UN doesn't solve problems, it manages them in perpetuity: it turns them into Les Miserables; come back two decades later and it's still running. Even without the corruption and drugs and child-sex rings, it's not an impressive record. Any German contemplating Palestine's 'refugee"camps', now celebrating their golden jubilee, ought to be grateful his country enjoyed the straightforward benefits of victors' justice.

Mr Bush understands this. At Camp David, he resisted the pushy Mr Blair and, after his experience with Rummy a couple of weeks back, Mr Blair wasn't pushy enough to push it too far. To gauge the limits of the administration's patience, listen to its most famous 'moderate'. 'We didn't take on this huge burden with our coalition partners not to be able to have significant, dominating control over how it unfolds in the future,' Cohn Powell told Congress last week. Now imagine what Rummy, Condi, Wolfy and Cheney have in mind, and, even if you split the difference, you still wind up miles out of Clare Short land. The Americans took a back-seat in postwar Afghanistan because a peaceable Afghanistan was a bonus, not a war aim. But Iraq's different. As has been said in this space many times, it's supposed to be the first domino. It has to work.

How do you do that? Well, first, if the last fortnight teaches us anything, it's that the minimalist approach won't work. You can't just lop off Saddam, his sons and the top 50 apparatchiks but otherwise retain the existing structures and personnel. It's clear after the depravity of the fedayeen and others that Iraq needs comprehensive deBaathification. The best people to supervise that are the guys who've been on the receiving end — the Americans, British and Australians. The French and the UN would lack the motivation, and past form suggests they wouldn't even see it as a problem.

If there's not much of the last 40 years of Iraqi history you'd want to retain as a model for the future, the previous four decades aren't much better. We ought to forget about the Hashemite restoration talk, or save it for the Hejaz. It was the British imposition of Faisal that hobbled Iraq at birth, starting with the rigged referendum by which he claimed his throne: if you think Iraqi leaders' election landslides began with Saddam, take a look at the 96 per cent pro-Faisal vote the British arranged for their man. One could easily argue that the two biggest problems in the Middle East arose from London's urge to invent kingdoms for Hashemite princelings: without its imported monarch, it would be easy to see Jordan as the Palestinian state; and, without its imported monarch, the comparatively moderate pluralist culture of Mesopotamia might have steered clear of the follies of Egypt and Arabia. The Hashemites, though small beer now, had a profound cultural impact on the region: the carpetbag rent-a-kings and their ludicrous dreams of empire spawned the Pan-Arabist delusions of every incompetent windbag from Nasser to Saddam.

I hate to sound down on the British all the time, when the only trouble with the Middle East was that you chaps weren't there long enough. HMG drew lines on a map to suit its needs and then got chased out, leaving real estate designed to serve the original landlord's purposes to crumble into toxic squats for whichever thug barricaded himself in. Given longer, Britain might have left another Singapore or Hong Kong, or Barbados, Mauritius, Papua New Guinea. You now have a second bite of the olive, even if only in a supporting role to the US.

But, if you're looking for a new Iraqi constitution, the Americans and the Commonwealth are still the best models. If it weren't that Lloyd George had managed to slice the province of Mosul off from the French and had no desire to return it to the Turks, the Kurds would never have found themselves lumped in with the vilayets of Baghdad and Basra. But, given that everyone's agreed not to redraw any borders, Iraq's best hope lies as a very decentralised confederation whose provinces have a high degree of autonomy and whose central government has precisely defined, very limited powers mainly over defence and external affairs. Kurdistan would be all but independent: it wouldn't have an Olympic team or a seat at the UN, and it wouldn't be allowed privileged relations with other states (as, for example. Quebec and Northern Ireland are), all of which would distress the Turks. But, aside from electing representatives to a national legislature and participating in the armed forces, it would be relatively unperturbed by Baghdad. Radical decentralisafion is the best way of liberating the talents of Iraq's people, and of increasing the odds that, even if something goes wrong, something somewhere else might go right.

Outside of Kurdistan, no one really knows for sure who'll be running the place. The Iraqi National Congress has its good days and bad; Ahmed Chalabi is well spoken of in Washington, but he's been out of Baghdad for half a century and who can say whether he's popular with any resident Iraqis or, given the Arab temperament, how transient and meaningless any popularity will be? But the Americans have to be firm: Iraq needs secular, non-clan government, a military that keeps out of politics, an independent judiciary, and free elections — first, at the local and provincial levels, finally at the federal level. If they settle for the Mubarak du jour, the whole thing will be a waste of time. And that's why you don't want the French or the EU or the UN involved, because that way guarantees you'll wind up with an unsavoury strongman somewhere on the murky continuum from Emperor Bokassa to Paddy Ashdown.

That said, if Mr Blair wanted to do something useful. he might try a long shot: offer Iraq the membership in the Commonwealth that the League of Nations denied it all those years ago. Arab nations don't belong to any international clubs other than those defined by race or religion; it would do them good to mingle more widely.