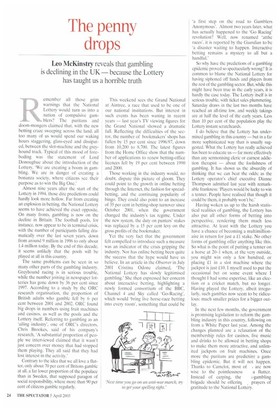 Remember all those grim warnings that the National Lottery would turn us into a nation of compulsive gamblers? The puritans and doom-mongers claimed that, with the new betting craze sweeping across the land, all too many of us would spend our waking hours staggering, glass-eyed and dissipated, between the slot-machine and the greyhound track. Typical of this mood of foreboding was the statement of Lord Donoughue about the introduction of the Lottery, 'We are creating a boom in gambling. We are in danger of creating a bonanza society, where citizens see their purpose as to win the Big One.'

Almost nine years after the start of the Lottery in 1994, those dire predictions could hardly look more hollow. Far from creating an explosion in betting, the National Lottery seems to have achieved the exact opposite. On many fronts, gambling is now on the decline in Britain. The football pools, for instance, now appear to be in terminal crisis, with the number of participants falling dramatically over the last seven years, down from around 9 million in 1996 to only about 1.4 million today. By the end of this decade. it seems unlikely that the pools will be played at all in this country.

The same problems can be seen in so many other parts of the gambling industry. Greyhound racing is in serious trouble, while the number joining in newspaper lotteries has gone down by 36 per cent since 1997. According to a study by the ORC research organisation, the proportion of British adults who gamble fell by 6 per cent between 2001 and 2002. ORC found big drops in numbers using fruit machines and casinos, as well as the pools and the Lottery itself. Referring to gambling as an 'ailing industry', one of ORC's directors, Chris Brookes, said of his company's research, 'A substantial proportion of people we interviewed claimed that it wasn't just concern over money that had stopped them playing. They all said that they had lost interest in the activity.'

Contrary to the idea that we all love a flutter, only about 70 per cent of Britons gamble at all, a far lower proportion of the populace than in Sweden, that supposed paragon of social responsibility, where more than 90 per cent of citizens gamble regularly. This weekend sees the Grand National at Aintree, a race that used to be one of our national institutions. But interest in such events has been waning in recent years — last year's TV viewing figures for the Grand National showed a dramatic fall. Reflecting the difficulties of the sector, the number of bookmakers' shops has fallen by 15 per cent since 1996/97, down from 10,200 to 8.700. The latest figures from the Home Office show that the number of applications to renew betting-office licences fell by 19 per cent between 1990 and 2000.

Those working in the industry would, no doubt, dispute this picture of gloom. They could point to the growth in online betting through the Internet, the fashion for spreadbetting, and the continuing popularity of bingo. They could also point to an increase of 35 per cent in betting-shop turnover since October 2001, when the government changed the industry's tax regime. Under the new system, the duty on punters' stakes was replaced by a 15 per cent levy on the gross profits of the bookmaker.

Yet the very fact that the government felt compelled to introduce such a measure was an indicator of the crisis gripping the industry. Nor has online betting been quite the success that the hype would have us believe. In an article in the Observer in July 2001 Cristina Odone claimed, 'The National Lottery has slowly legitimised gambling.' She then expressed her concern about interactive betting, highlighting a newly formed consortium of the BBC, Channel 4 and Sky called `Go-Racing', which would 'bring live horse-race betting into every room', something that could be

'a first step on the road to Gamblers Anonymous'. Almost two years later, what has actually happened to the `Go Racing' revolution? Well, now renamed 'atthe races', it is reported by the Guardian to be 'a disaster waiting to happen. Interactive betting remains a mystery to all but a handful.'

So why have the predictions of a gambling epidemic proved so spectacularly wrong? It is common to blame the National Lottery for having siphoned off funds and players from the rest of the gambling sector. But, while this might have been true in the early years, it is hardly the case today. The Lottery itself is in serious trouble, with ticket sales plummeting. Saturday draws in the last two months have reached an all-time low, and weekly takings are at half the level of the early years. Less than 10 per cent of the population play the Lottery instant scratchcards.

I do believe that the Lottery has undermined gambling in this country— but in a far more sophisticated way than is usually suggested. What the Lottery has really achieved has been to educate us — far more effectively than any sermonising cleric or earnest addiction therapist — about the foolishness of gambling. It has shown us the absurdity of thinking that we can beat the odds; as the Lottery operator's chief executive Dianne Thompson admitted last year with remarkable frankness: *Players would be lucky to win a tenner. People have realised that though it could be them, it probably won't be.'

Having woken us up to the harsh statistical realities of gambling, the Lottery has also put all other forms of betting into perspective, rendering them much less attractive. At least with the Lottery you have a chance of becoming a multimillionaire in return for just a £1 stake. No other forms of gambling offer anything like this. So what is the point of putting a tenner on a horse at 20-1 when, at the very outside, you might win only a few hundred, or placing £1 in a slot machine where the jackpot is just £10. I myself used to put the occasional bet on some event where I thought I had some expertise, like an election or a cricket match, but no longer. Having played the Lottery, albeit irregularly, such gambles now seem to be ridiculous: much smaller prizes for a bigger outlay.

In the next few months, the government is promising legislation to reform the gambling industry in this country, following on from a White Paper last year. Among the changes planned are a relaxation of the membership rules for casinos, live music and drinks to be allowed in betting shops to make them more attractive, and unlimited jackpots on fruit machines. Once more the puritans are predicting a gambling epidemic. But it will not happen.

Thanks to Camelot, most of are now wise to the pointlessness a flutter.

Instead of carping, the i-gambling brigade should be offerinL prayers of gratitude to the National Lottery.