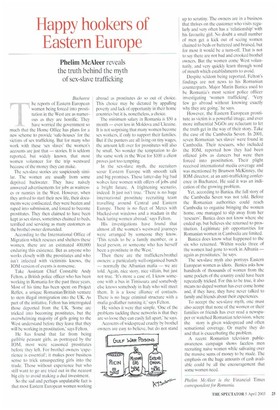 Bucharest he reports of Eastern European women being forced into prostitution in the West are as numerous as they are horrific. They have worried the government so much that the Home Office has plans for a new scheme to provide 'safe-houses' for the victims of sex trafficking. But for many who work with these 'sex slaves' the women's accounts are just that — stories. It is seldom reported, but widely known, that most women volunteer for the trip westward because of the money they can make.

The sex-slave stories are suspiciously similar. The women are usually from some deprived backwater. They have naively answered advertisements for jobs as waitresses or nannies in the West. However, when they arrived to start their new life, their documents were confiscated, they were beaten and raped into submission, and forced to become prostitutes. They then claimed to have been kept as sex slaves, sometimes chained to beds, terrified and servicing as many customers as the brothel owner demanded.

According to the International Office of Migration which rescues and shelters these women, there are an estimated 400,000 enduring this existence. But as anyone who works closely with the prostitutes and who isn't infected with victimitis knows, the IOM version of events is nonsense.

Take Assistant Chief Constable Andy Felton. a British police officer who has been working in Romania for the past three years. Most of his time has been spent on Project Reflex, a unique Romanian/British venture to stem illegal immigration into the UK. As part of the initiative, Felton has interrogated those deported from the UK. 'Some are tricked into becoming prostitutes, but the overwhelming majority of girls going to the West understand before they leave that they will be working in prostitution,' says Felton.

He has found that far from being gullible peasant girls, as portrayed by the IOM, most were seasoned prostitutes before they left. For brothel owners 'experience is essential'; it makes poor business sense to trick unsuspecting girls into the trade. Those without experience but who still want to go are tried out in the nearest big city to avoid making a dud investment.

So the sad and perhaps unpalatable fact is that most Eastern European women working abroad as prostitutes do so out of choice. This choice may be dictated by appalling poverty and lack of opportunity in their home countries hut it is, nonetheless, a choice.

The minimum salary in Romania is $50 a month — even less in Moldova and Ukraine. It is not surprising that many women become sex workers, if only to support their families. But if the punters are all living on tiny wages, the amount left over for prostitutes will also be small. No wonder the temptation to do the same work in the West for $100 a client proves just too tempting.

In the sex-slave myth, the recruiters scour Eastern Europe with smooth talk and big promises. These latter-day big bad wolves lure women with offers of jobs and a bright future. A frightening scenario, indeed. It just isn't true. 'There is no huge international prostitute recruiting team travelling around Central and Eastern Europe. There is no fleet of Mercs with blacked-out windows and a madam in the back luring women abroad, says Felton.

His investigations have found that almost all the women's westward journeys were arranged by someone they know. 'This tends to be a family member, or a local person, or someone who has herself been a prostitute in the West.'

Then there are the traffickers/brothel owners: a particularly well-organised bunch — normally the Albanian mafia — we are told. Again, nice story, nice villain, but just not true. 'It's more a case of. I know someone with a bus in Timisoara and somebody else knows somebody in Italy who will meet them. It is a loose alliance of contacts. There is no huge criminal structure with a mafia godfather running it,' says Felton.

He wishes it were that simple. 'One of the problems tackling these networks is that they are so loose they can easily fall apart,' he says.

Accounts of widespread cruelty by brothel owners are easy to believe, but do not stand up to scrutiny. The owners are in a business that thrives on the customer who visits regularly and very often has a 'relationship' with his favourite girl. No doubt a small number of men get a kick out of seeing women chained to beds or battered and bruised, but for most it would be a turn-off. That is not to say there are not had and crooked brothel owners. But the women come West voluntarily, and very quickly learn through word of mouth which establishments to avoid.

Despite seldom being reported, Felton's findings are not news to his Romanian counterparts. Major Mann Banica used to be Romania's most senior police officer investigating 'women trafficking'. 'Very few go abroad without knowing exactly why they are going,' he says.

However, the Eastern European prostitute as victim is a powerful image, and ever more influential NGOs are reluctant to let the truth get in the way of their story. Take the case of the Cambodia Seven. In 2001, seven Romanian 'sex slaves' were found in Cambodia. Their rescuers, who included the IOM, reported how they had been offered jobs as dancers but were then forced into prostitution. Their plight received international media coverage and was mentioned by Brunson McKinney, the IOM director, at an anti-trafficking conference in Bucharest. He said it was an indication of the growing problem.

Yet, according to Banica, the full story of the Cambodia Seven was not told. Before the Romanian authorities could reach Cambodia to organise bringing the women home, one managed to slip away from her 'rescuers'. Banica does not know where she ended up, but believes she returned to prostitution. Legitimate job opportunities for Romanian women in Cambodia are limited.

Banica does know what happened to the six who returned. 'Within weeks three of the women had gone to work in Albania — again as prostitutes.' he says.

The sex-slave myth also portrays Eastern European women as idiots. Banica asks how hundreds of thousands of women from the same pockets of the country could have been repeatedly tricked. For this to be true, it also means no duped woman has ever come home and, if they have, they have never talked to family and friends about their experiences.

To accept the sex-slave myth, one must also accept that none of the women or their families or friends has ever read a newspaper or watched Romanian television, where the story is given widespread and often sensational coverage. Or maybe they do and that is exacerbating the problem.

A recent Romanian television publicawareness campaign shows faceless men recruiting naive women while salivating over the massive sums of money to be made. The emphasis on the huge amounts of cash available could be all the encouragement that some women need.