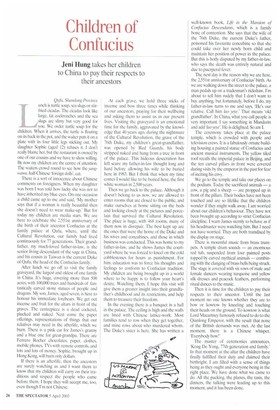 Lunch is turtle soup, sea slugs or stirfried cicadas. The cicadas look like large, fat cockroaches and the sea slugs are slimy but very good for you. We order turtle soup for the children. When it arrives, the turtle is floating on its back in the pot, and the waiter puts it on a plate with its four little legs sticking out. My daughter Sophie (aged 12) refuses it. I don't really blame her, but the restaurant is owned by one of our cousins and we have to show willing. By now my children are the centre of attention. The waiters crowd round to see how the yangwawa, half-Chinese `foreign dolls', eat.

There is a sort of innocence about Chinese comments on foreigners. When my daughter was born I was told how lucky she was not to have inherited my blue eyes. On one occasion a child came up to me and said, 'My mother says that if a woman is really beautiful then she doesn't need to wear make-up; But for today my children are media stars. We are here to celebrate the 2,551st anniversary of the birth of their ancestor Confucius at the family palace at Qufu, where, until the Cultural Revolution, our family had lived continuously for 77 generations. Their grandfather, my much-loved father-in-law, is the senior living descendant of the sage in China, and his cousin in Taiwan is the current Duke of Qufu, the head of the Confucius family.

After lunch we go off to visit the family graveyard, the largest and oldest of one family in China. It's huge, covering more than 500 acres, with 100,000 trees and hundreds of fantastically carved stone statues of people and dragons. My son, James. aged seven, is here to honour his immediate forebears. We get out incense and fruit for the altars in front of the graves. The centrepiece is a dead cockerel, plucked and naked. Next come the paper offerings, representations of things that our relatives may need in the afterlife, which we burn. There is a pink car for James's granny and a blue one for great-grandpa. There are Ferrero Rocher chocolates. paper. clothes, mobile phones, TVs with remote controls, and lots and lots of money. Sophie, brought up in Hong Kong, will burn only dollars.

If there is an afterlife, then the ancestors are surely watching us and I want them to know that my children will carry on their traditions and respect the people who came before them. I hope they will accept me, too. even though I'm not Chinese.

At each grave, we hold three sticks of incense and bow three times while thinking of our ancestors, praying for their wellbeing and asking them to assist us in our present lives. Visiting the graveyard is an emotional time for the family, aggravated by the knowledge that 40 years ago, during the nightmare of the Cultural Revolution, the grave of the 76th Duke, my children's great-grandfather, was opened by Red Guards, his body stripped naked and hung from a tree in front of the palace. This hideous desecration has left scars: my father-in-law thought long and hard before allowing his wife to be buried here in 1983. But I think that when my time comes! would like to be buried here, the first white woman in 2500 years.

Then we go back to the palace. Although it doesn't belong to us now, we are allowed to enter rooms that are closed to the public, and make ourselves at home sitting on the beds and looking closely at the pictures and porcelain that survived the Cultural Revolution. The place is huge, with 468 rooms, many of them now in disrepair. The best kept up are the ones that were the home of the Duke and his wives and concubines, and those in which business was conducted. This was home to my father-in-law, and he shows James the courtyard where he was forced to kneel on the cold cobblestones for hours as punishment. For him, education was to force his thoughts and feelings to conform to Confucian tradition. My children are being brought up in a world where to be happy is to follow your heart's desire. Watching them, I hope this visit will give them a greater insight into their grandfather's childhood and its restrictions, and help them to treasure their freedom.

In the evening there is a banquet in a hall in the palace. The ceiling is high and the walls arc lined with Chinese lattice-work. Most families tend to row when they get together, and mine rows about who murdered whom. The Duke's sister is here. She has written a well-known book, Life in the Mansion of Confucius Descendants, which is a family bone of contention. She says that the wife of the 76th Duke, the current Duke's father, poisoned his favourite concubine so that she could take over her newly born child and maintain her position of power in the palace. But this is hotly disputed by my father-in-law, who says the death was entirely natural and due to puerperal fever.

The next day is the reason why we are here. the 2,551st anniversary of Confucius' birth. As we are walking down the street to the palace, a man pedals up on a tradesman's rickshaw. I'm about to tell him rudely that I don't want to buy anything, but fortunately, before I do, my father-in-law turns to me and says, 'He's our relative. Call him lao yeye ; That means 'old grandfather'. In China, what you call people is very important. I say something in Mandarin and add lao yeye' . He is delighted. So am I.

The ceremony takes place at the palace temple, which is crowded with people and television crews. It is a fabulously ornate building housing a painted statue of Confucius and ancient musical instruments. The yellow tiled roof recalls the imperial palace in Beijing, and the ten carved pillars in front were covered during visits by the emperor in the past for fear of inciting his envy.

We go to the temple and take our places on the podium. Today the sacrificed animals — a cow, a pig and a sheep — are propped up in front of the pillars. Their bodies have not been touched and are so lifelike that the children wonder if they might walk away. I am worried about our children's behaviour. They have not been brought up according to strict Confucian discipline. I warn James sternly to behave as if his headmaster were watching him. But I need not have worried. They are both transfixed by the display on stage.

There is mournful music from brass trumpets. A temple drum sounds — an enormous red tub, suspended from four painted posts topped by carved mythical animals — combining with the clanging of brass bells being struck. The stage is covered with six rows of male and female dancers wearing turquoise and yellow silk dresses and peacock feathers, performing ritual dances to the music.

Then it is time for the children to pay their respects to their ancestor. Until the last moment no one knows whether they are to bow or kowtow by kneeling and touching their heads on the ground. To kowtow is what Lord Macartney famously refused to do to the Qianlong Emperor, with the result that none of the British demands was met. At the last moment, there is a Chinese whisper. 'Everybody bow!'

The master of ceremonies announces, 'Kong De Yong, 77th generation and family.' In that moment at the altar the children have finally fulfilled their duty and claimed their birthright. I am filled with a sense of things being as they ought and everyone being in the right place. We have done what we came to do. All the packing, the planes, the taxis, the dinners, the talking were leading up to this moment, and it has been done.