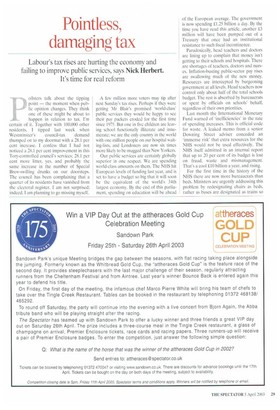 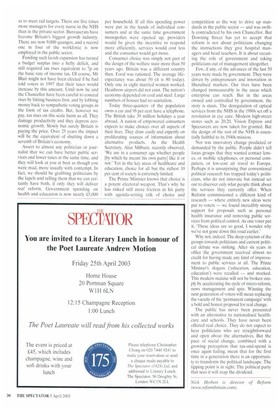 ollsters talk about the tipping point — the moment when public opinion changes. They think one of these might be about to happen in relation to tax. I'm certain of it. Together with 100,000 other residents, I tipped last week when Westminster's council-tax demand thumped on to my doormat with a 28.1 per cent increase. I confess that I had not noticed a 28.1 per cent improvement in this Tory-controlled council's services: 28.1 per cent more litter, yes, and probably the same increase in the number of Special Brew-swilling drunks on our doorsteps. The council has been complaining that a quarter of its residents have vanished from the electoral register. I am not surprised; indeed. I am planning to go missing myself. A few million more voters may tip after next Sunday's tax rises. Perhaps if they were getting Mr Blair's promised 'world-class' public services they would be happy to see their pay packets eroded for the first time since 1975. But one in five children are leaving school functionally illiterate and innumerate; we are the only country in the world with one million people on our hospital waiting-lists, and Londoners are now six times more likely to be mugged than New Yorkers.

Our public services are certainly globally superior in one respect. We are spending world-class amounts on them. The NHS hit European levels of funding last year, and is set to have a budget so big that it will soon be the equivalent of the world's 34th largest economy. By the end of this parliament, spending on education will be ahead of the European average. The government is now spending £1.25 billion a day. By the time you have read this article, another £3 million will have been pumped out of a Treasury that once had an institutional resistance to such fiscal incontinence.

Paradoxically, head teachers and doctors are lining up to complain that money isn't getting to their schools and hospitals. There are shortages of teachers, doctors and nurses. Inflation-busting public-sector pay rises are swallowing much of the new money. Resources are intercepted by burgeoning government at all levels. Head teachers now control only about half of the total schools budget. The rest is absorbed by bureaucrats or spent by officials on schools' behalf, regardless of their own priorities.

Last month the International Monetary Fund warned of 'inefficiencies' in the rate of spending increases. This is official code for waste. A leaked memo from a senior Downing Street adviser conceded an 'immense risk' that extra resources for the NHS would not be used effectively. The NHS itself admitted in an internal report that up to 20 per cent of its budget is lost on fraud, waste and mismanagement. That's a cool £10 billion a year, and rising.

For the first time in the history of the NHS there are now more bureaucrats than beds. Ministers are urgently addressing this problem by redesignating chairs as beds, rather as buses are designated as trains so as to meet rail targets. There are five times more managers for every nurse in the NHS than in the private sector. Bureaucrats have become Britain's biggest growth industry. There are now 9,000 quangos, and a record one in four of the workforce is now employed in the public sector.

Funding such lavish expansion has turned a budget surplus into a hefty deficit, and still required tax rises equivalent to 7p on the basic rate of income tax. Of course, Mr Blair might not have been elected if he had told voters in 1997 that their taxes would increase by this amount. Until now he and the Chancellor have been careful to conceal rises by hitting business first, and by lobbing money back to sympathetic voting groups in the form of tax credits. But, however we pay, tax rises on this scale harm us all. They damage productivity and they depress economic growth. Slowly but surely Britain is paying the price. Over 25 years the impact will be the equivalent of shutting down a seventh of Britain's economy.

Assert to almost any politician or journalist that we can have better public services and lower taxes at the same time, and they will look at you at best as though you were mad, more usually with contempt. In fact, we should he grabbing politicians by the lapels and telling them that we can certainly have both, if only they will deliver real reform. Government spending on health and education is now nearly £5,000 per household. If all this spending power were put in the hands of individual consumers and at the same time government monopolies were opened up, providers would be given the incentive to respond more efficiently, services would cost less and the consumer would get more.

Consumer choice was simply not part of the design of the welfare state more than 50 years ago. Britain was a different country then. Food was rationed. The average lifeexpectancy was about 50 (it is 80 today). Only one in eight married women worked. Heathrow airport did not exist. The nation's economy depended on coal and steel. Large numbers of houses had no sanitation.

Today three-quarters of the population owns a car and 98 per cent have a telephone. The British take 39 million holidays a year abroad. A nation of empowered consumers expects to make choices over all aspects of their lives. They draw easily and expertly on proliferating sources of information about alternative products. As the Health Secretary, Alan Milburn, recently observed, 'We are in a consumer age whether people [by which he meant his own party] like it or not.' Yet in the key areas of healthcare and education, choice for all but the richest 10 per cent of society is extremely limited.

The Prime Minister knows that choice is a potent electoral weapon. That's why he has risked still more friction in his party with agenda-setting talk of choice and competition as the way to drive up standards in the public sector — and was swiftly contradicted by his own Chancellor. But Downing Street has yet to accept that reform is not about politicians changing the instructions they give hospital managers and head teachers. It is about recasting the role of government and taking politicians out of management altogether.

Few, if any, of the advances of the last 50 years were made by government. They were driven by entrepreneurs and innovation in liberalised markets. Our lives have been changed immeasurably in the areas which enterprise can reach. But in the areas owned and controlled by government, the story is stasis. The deregulation of optical services from the NHS in the 1980s set off a revolution in eye care. Modern high-street stores such as 20:20. Vision Express and Specsavers are now taken for granted. But the design of the rest of the NHS is essentially faithful to its 1940s mission.

Nor was innovatory change predicted or demanded by the public. People didn't tell focus groups that they wanted contact lenses, or mobile telephones, or personal computers, or low-cost air travel to Europe. Perhaps it is unsurprising that conventional political research has trapped today's politicians, who do not innovate but instead set out to discover only what people think about the services they currently offer. When Reform commissioned a different kind of research — where entirely new ideas were put to voters — we found incredibly strong support for proposals such as personal health insurance and removing public services from political control. As one voter put it, 'These ideas are so good, I wonder why we've not gone down this road earlier.'

Why not, indeed. The deep cynicism of the groups towards politicians and current political debate was striking. After six years in office the government received almost no credit for having made any kind of improvement to public services at all. The Prime Minister's slogans (education, education, education') were recalled — and mocked. This modern malaise will not be broken simply by accelerating the cycle of micro-reform, news management and spin. Winning the next generation of voters will mean replacing the vacuity of the 'permanent campaign' with a bold and honest proposal for real change.

The public has never been presented with an alternative to nationalised healthcare and schools. They have never been offered real choice. They do not expect to hear politicians who are straightforward and open about the alternatives. But the pace of social change, combined with a growing perception that tax-and-spend is once again failing, mean that for the first time in a generation there is an opportunity to transform the political landscape. The tipping point is in sight. The political party that sees it will reap the dividend.