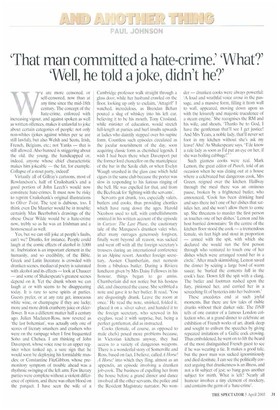 'That man committed a hate-crime.' What?'

c are more censored, or self-censored, now than at any time since the mid-18th century. The concept of the hate-crime, enforced with increasing vigour, and against spoken as well as written offences, makes it unlawful to joke about certain categories of people: not only non-whites (jokes against whites per se are still lawful), but also Welsh and Scots, Irish, French, Belgians, etc.; not Yanks — that is still allowed. Also banned is sniggering about the old, the young, the handicapped or, indeed, anyone whose chief characteristic makes him jokeable — the fat, for example. Collapse of a stout party, indeed!

Virtually all of Gillray's cartoons, most of Rowlandson's, half of Cruikshank's and a good portion of John Leech's would now constitute hate-crimes. It must now be risky to reprint Cruikshank's original illustrations to Oliver Twist. The text is dubious, too. I think even Du Manlier would be in trouble; certainly Max Beerbohm's drawings of the obese Oscar Wilde would be a hate-crime now, trebly so as he was an Irishman and a homosexual as well.

Yes, but we can still joke at people's faults, can't we? Drunks, for instance. People could laugh at the comic effects of alcohol in 3,000 BC. Inebriation is an important element in the humanity, and so credibility, of the Bible. Greek and Latin literature is crowded with drunken scenes, mediaeval poetry is saturated with alcohol and its effects — look at Chaucer — and some of Shakespeare's greatest scenes depend on it. Yet the drunk whom we can laugh at or with seems to be disappearing today. It is rare to serve spirits at parties. Guests prefer, or at any rate get, innocuous white wine, or champagne if they are lucky; more and more drink cranberry juice or elderflower. It was a different matter half a century ago. Julian Maclaren-Ross, now revered as 'the last bohemian', was actually only one of scores of literary smashers and crashers who were on the rampage when I first frequented Soho and Chelsea, I am thinking of John Davenport, whose voice rose to an upper register when tanked up, a sure sign that he would soon be deploying his formidable muscles; or Constantine FitzGibbon, whose premonitory symptom of trouble ahead was a rhythmic swinging of the left arm, Few literary parties were complete without a violent difference of opinion, and there was often blood on the parquet. I have seen the wife of a Cambridge professor walk straight through a glass door, while her husband crawled on the floor, looking up only to exclaim, 'Attagirl!' I watched, incredulous, as Brendan Behan poured a slug of whiskey into his left ear, believing it to be his mouth. Tony Crosland, while minister of education, would stretch full-length at parties and hurl insults upwards at ladies who daintily stepped over his supine form. Countless such episodes circulated as the jocular nourishment of the day, soon acquiring classic form as cherished legends. I wish I had been there when Davenport put the former lord chancellor on the mantelpiece of the bar in the Savile club, or when Evelyn Waugh smashed in the glass case which held cigars in the same club because the porter was slow in responding to his furious ringing of the bell. He was expelled for that, and from the Beefsteak for lighting with the servants'.

Servants got drunk, too, especially valets, butlers and cooks, thus providing chortles which have rung down the ages. Harold Nicolson used to tell, with embellishments omitted in his written account of the episode in Curzon: The Last Phase, the cautionary tale of the Marquess's drunken valet who, after many outrages generously forgiven, finally went beyond all reason, was sacked and went off with all the foreign secretary's trousers during an international conference in an Alpine resort. Another foreign secretary, Austen Chamberlain, met nemesis from a bibulous butler. During a Riviera luncheon given by Mrs Daisy Fellowes in his honour. things began to go amiss. Chamberlain did not notice but his hostess did, and discerned the cause. She scribbled a note and gave it to her butler. It read, You are disgustingly drunk. Leave the room at once.' He read the note, smirked, folded it, placed it on a silver salver, and handed it to the foreign secretary, who screwed in his eyeglass, read it with surprise, but, being a perfect gentleman, did as instructed.

Cooks (female, of course, as opposed to male chefs) posed more problems because, in Victorian kitchens anyway, they had access to a variety of dangerous weapons. There is a wonderful story of Somerville and Ross, based on fact, I believe, calledA Horse! A Horse! into which they fling, almost as an appendix, an episode involving a drunken job-cook. The business of expelling her from the house before a grand dinner and dance involved all the other servants, the police and the Resident Magistrate narrator. No won

der — drunken cooks were always powerful: 'A loud and wrathful voice arose in the passage, and a massive form, filling it from wall to wall, appeared, moving down upon us with the leisurely and majestic truculence of a steam engine.' She recognises the RM and his wife, and shouts, 'Thanks be to God, I have the gentleman that'll see I get justice! And Mrs Yeats, a noble lady, that'll never set foot in my kitchen without she's ask my leave! Aha! As Shakespeare says, "I'de know a tale lady as soon as I'd put an eye on her, if she was boiling cabbage!"

Such giantess cooks were real. Mark Lemon, the great editor of Punch, told of an occasion when he was dining out at a house where a celebrated but dangerous cook, Mrs Green, reigned over the kitchen. Halfway through the meal there was an ominous pause, broken by a frightened butler, who announced, 'Cook has been drinking hard and says there isn't one of her dishes that satisfies her, and she won't allow them to come up. She threatens to murder the first person as touches one of her dishes.' Lemon and his host hurried downstairs: 'In the centre of the kitchen floor stood the cook — a tremendous female, six feet high and stout in proportion — armed with the spit, with which she declared she would run the first person through who ventured to touch one of her dishes which were arranged round her in a circle.' After much skirmishing, Lemon saved the dinner by seizing a large bowl of warm sauce; he 'hurled the contents full in the cook's face. Down fell the spit with a clang. The butler and footman rushed upon the fury, pinioned her, and carried her in a screeching fit of hysterics into her bedroom.'

These anecdotes end at such joyful moments. But there are few tales of risible drunks without their darker side. The DNB tells of one curator of a famous London collection who, at a grand dinner to celebrate an exhibition of French works of art, drank deep and sought to enliven the speeches by giving repeated imitations of a Gallic cock crowing. Thus emboldened, he went on to lift the beard of the most distinguished French guest to see if he was wearing a tie. It makes a good tale, but the poor man was sacked ignominiously and died destitute. I can see the politically correct arguing that drunkenness is an illness, and not a fit subject of jest; so bang goes another subject for mirth. What is left? Nearly all humour involves a tiny element of mockery, and contains the germ of a 'hate-crime'.