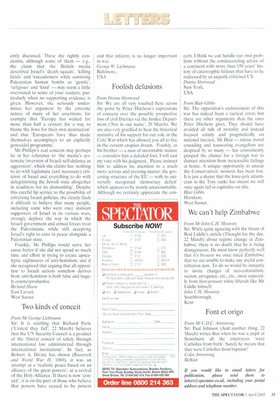 From Mr Richard Hoare Sir: When Melanie Phillips used to

write for the Sunday Times, I found her articles invariably intelligent and thought-provoking. Sadly, her recent articles on antiSemitism fall far short of her previous standard.

Ms Phillips reports on a conference in Jerusalem at which a number of extreme examples of anti-Semitism were appar ently discussed. These she rightly condemns, although some of them — e.g., the claim that the British media described Israel's 'death squads', 'killing fields' and 'executioners' while sanitising Palestinian human bombs as 'gentle', 'religious' and `kind' — may seem a little overstated to some of your readers, particularly when no supporting evidence is given. However, she seriously undermines her argument by the extreme nature of many of her assertions, for example that 'Europe has waited for more than half a century for a way to blame the Jews for their own destruction' and that 'Europeans have thus made themselves accomplices to an explicitly genocidal programme'.

Ms Phillips's real concern may perhaps lie in her reference to 'the media's systematic inversion of Israeli self-defence as aggression', which she claims has `nothing to do with legitimate (and necessary) criticism of Israel and everything to do with delegitimising the Jewish state altogether in readiness for its dismantling'. Despite this careful hp service to the possibility of criticising Israeli policies, she clearly finds it difficult to believe that many people, including some who were once stalwart supporters of Israel in its various wars, strongly deplore the way in which the Israeli government and armed forces treat the Palestinians, while still accepting Israel's right to exist in peace alongside a Palestinian state.

Frankly, Ms Phillips would serve her cause better if she did not spend so much time and effort in trying to create apocalyptic nightmares of anti-Semitism; and if she recognised that arguing that all opposition to Israeli actions somehow derives from anti-Semitism is both false and hugely counterproductive, Richard Hoare East Lavant, West Sussex