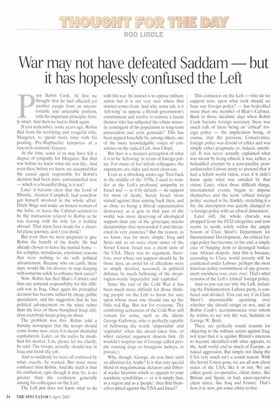 Page 34, 5 April 2003 — War may not have defeated Saddam — but it has hopelessly confused the Left
Close

nor Robin Cook. At first we thought that he had effected yet another escape from an uncomfortable and untenable position, with his important principles firmly intact. And then we had to think again.

If you remember, some years ago, Robin fled from his terrifying and vengeful wife, Margaret, to spend more time with his pouting, Pre-Raphaelite temptress of a research assistant, Gaynor.

At the time, some of us may have felt a degree of sympathy for Margaret. But that was before we knew what she was like. And even then, before we knew, we accepted that the causal agent responsible for Robin's decision had been pure, untrammelled love — which is a beautiful thing, is it not?

Later it became clear that the Lord of Misrule, Alastair Campbell, had somehow got himself involved in the whole affair. Ditch Mags and make an honest woman of the babe, or leave the Cabinet seemed to be the instruction relayed to Robin as he was leaving with his wife for a holiday abroad. That must have made for a cheerful plane journey, don't you think?

But even then we were prepared to give Robin the benefit of the doubt. He had already chosen to leave the marital home for complex, tumultuous, emotional reasons that were nothing to do with political advancement. Because who on earth, these days, would file for divorce or stop sleeping with someone solely to enhance their career?

Now, Robin has fled Blair's Cabinet and thus any notional responsibility for this difficult war in Iraq. Once again his principled decision has become sullied by cheap, public speculation, and the suggestion that he has political advancement on his mind rather than the lives of those benighted Iraqi children everybody keeps going on about.

The problem was this. Robin told a Sunday newspaper that the troops should come home now, even if it meant shameful capitulation. Later, on the radio, he modified his desires. Urn, please let me clarify, he said. The troops, actually, should stay in Iraq and finish the job.

And so suddenly we were all confused by what, exactly, he wanted. But none more confused than Robin. And the truth is that his confusion, epic though it may be, is no greater than the confusion generally among his colleagues on the Left.

The Left just does not know what to do with this war. Its instinct is to oppose military action but it is not very sure where that instinct comes from. And why, some ask, is it 'left-wing' to oppose a British government's commitment and resolve to remove a fascist dictator who has subjected the ethnic minority contingent of his population to long-term persecution and even genocide? This has been argued forcefully by, among others, one of the more knowledgable voices of conscience on the radical Left, Ann Clwyd.

But hers is a modern perception of what it is to be 'left-wing' in terms of foreign policy. For many of her leftish colleagues, the arguments are older and more clear-cut.

Even as a shrieking under-age Trot back in the middle of the 1970s, I used to wonder at the Left's profound antipathy to Israel and — as if by default — its support for most of Araby. Surely Israel, more sinned against than sinning back then, and as close to being a liberal representative democracy as it gets in that part of the world, was more deserving of ideological support than any of the grotesque macho dictatorships that surrounded it and threatened its very existence? But the reason, as we know, was far more simple: Iraq and Syria and so on were client states of the Soviet Union; Israel was a client state of the USA. There was no argument, therefore, over where our support should lie. In those days, an awful lot of affections were so simply decided, seasoned, in political debates, by much bellowing of the meaningless words 'imperialist' and 'capitalist'.

Since the end of the Cold War it has been much more difficult for those thinking people on the Left to know for sure upon whose mast one should run up the little red flag. But not for everyone. The comforting certainties of the Cold War still remain for some, such as the idiotic George Galloway, who is perfectly capable of bellowing the words 'imperialist' and 'capitalist' when the mood takes him, or when rational argument deserts him. (It wouldn't surprise me if George called people running dogs or bourgeois lackeys, in private.) Why, though, George, do you have such an affection for Araby? Is it that very special blend of megalomaniac dictators and illiberal wacko Islamists which so appeals to your socialistic sensibilities — or is it simply that, as a region and as a 'people', they find themselves pitted against the USA and Israel? This confusion on the Left — who do we support now: upon what rock should we base our foreign policy? — has bedevilled more than one member of Blair's Cabinet. Back in those idealistic days when Robin Cook became foreign secretary there was much talk of there being an 'ethical' foreign policy — the implication being, of course, that the previous. Conservative, foreign policy was devoid of ethics and was simply either pragmatic or, indeed, unethical. It was never actually explained what was meant by being ethical: it was, rather, a befuddled attempt by a post-pacifist, postunilateralist Labour party to pretend that it had a leftish world vision, even if it didn't know quite what was entailed by that vision. Later, when those difficult things, international events, began to impose themselves and the term 'ethical foreign policy' seemed to be, frankly, stretching it a bit, the description was quietly changed to 'a foreign policy with an ethical dimension'.

Later still, the whole charade was dropped from the FCO altogether and now seems to nestle solely within the ample bosom of Clare Short's Department for International Development. An ethical foreign policy has become, in the end, a simple case of bunging dosh to deranged basketcase African despots. And this is because, according to Clare, world poverty will be eradicated under Labour: perhaps the most hilarious policy commitment of any government anywhere ever, ever, ever. That's what remains of the Left's 'ethical' foreign policy.

And so you can see why the Left, including the Parliamentary Labour party, is confused and divided. You can see it in Clare Short's interminable agonising over whether she should resign or not, and in Robin Cook's inconsistencies over whom he wishes to see win the war, Saddam or George W. Bush.

There are perfectly sound reasons for objecting to the military action against Iraq; not least that it is against Britain's interests to become identified with what appears, to the Arab world and to much of Europe, as naked aggression. But simply not liking the USA very much isn't a sound reason. With the Soviet Union gone, we are all now client states of the USA, like it or not. We are either good, co-operative, client states. like Britain and Spain, or bad, unco-operative client states, like Iraq and France. That's how it is: now, pin some ethics to that.