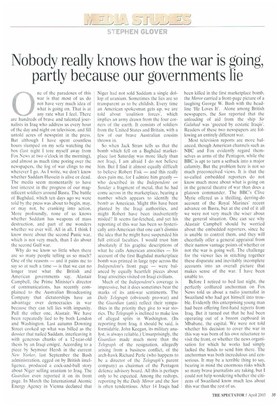 Page 35, 5 April 2003 — Nobody really knows how the war is going, partly because our governments lie
Close

Nobody really knows how the war is going, partly because our governments lie

ne of the paradoxes of this war is that most of us do not have very much idea of what is going on. That is at any rate what I feel. There are hundreds of brave and talented journalists in Iraq who address us every hour of the day and night on television, and fill untold acres of newsprint in the press. But although I have spent countless hours slumped on my sofa watching the box (last night I tore myself away from Fox News at two o'clock in the morning), and almost as much time poring over the newspapers, the fog of war clings to me wherever I go. As I write, we don't know whether Saddam Hussein is alive or dead. The media seem momentarily to have lost interest in the progress of our magnificent soldiers around Basra. The battle of Baghdad, which ten days ago we were told by the press was about to begin, may, or may not, be cranking into action. More profoundly, none of us knows whether Saddam has weapons of mass destruction, and part of me wonders whether we ever will. All in all, I think I know more about the second Punic war, which is not very much, than I do about the second Gulf war.

Why do we know so little when there are so many people telling us so much? One of the reasons — and it pains me to say so at such a time — is that we can no longer trust what the British and American governments say. Alastair Campbell, the Prime Minister's director of communications, has recently complained to the Australian Broadcasting Company that dictatorships have an advantage over democracies in war because they can tell lies with impunity. Pull the other one, Alastair, We have been repeatedly lied to by both London and Washington. Last autumn Downing Street cooked up what was billed as the dossier that nailed Saddam, interleaving it with generous chunks of a 12-year-old thesis by an Iraqi emigre. According to a piece by Seymour Hersh in the current Nev' Yorker. last September the Bush administration, egged on by British intelligence, produced a cock-and-bull story about Niger selling uranium to Iraq. The Guardian even reported it on its front page. In March the International Atomic Energy Agency in Vienna declared that Niger had not sold Saddam a single dollop of uranium. Sometimes the lies are so transparent as to be childish. Every time an American spokesman gets up, we are told about 'coalition forces', which implies an army drawn from the four corners of the earth. It consists of soldiers from the United States and Britain, with a few of our brave Australian cousins thrown in.

So when Jack Straw tells us that the bomb which fell on a Baghdad marketplace last Saturday was more likely than not Iraqi, I am afraid I do not believe him. But I find it almost equally difficult to believe Robert Fisk — and this really does pain me, for I admire him greatly — who described in the Independent on Sunday a fragment of metal, that he had come across in the marketplace, bearing a number which appears to identify the bomb as American. Might this have been planted by the Iraqi authorities, and might Robert have been inadvertently misled? It seems far-fetched, and yet his reporting of this war has been so hysterically anti-American that one can't dismiss the idea that he might have suspended his full critical faculties, I would trust him absolutely if his graphic descriptions of what he calls American atrocities — his account of the first Baghdad marketplace bomb was printed in large type across the Independent's front page — were balanced by equally heartfelt pieces about Iraqi atrocities visited on Iraqi civilians.

Much of the Independent's coverage is impressive, but it does sometimes bear the marks of its anti-war sentiments. The Daily Telegraph (obviously pro-war) and the Guardian (anti) reflect their sympathies in the priority they give to war stories. The Telegraph is inclined to make less of alleged splits in Washington. (Its reporting from Iraq, it should be said, is formidable. John Keegan, its military analyst, is always reliable.) Unsurprisingly, the Guardian made much more than the Telegraph of the resignation, allegedly arising from a business conflict, of the arch-hawk Richard Perle (who happens to be a director of the Telegraph's parent company) as chairman of the Pentagon defence advisory board. All this is perhaps only to be expected. Among the redtops, reporting by the Daily Mirror and the Sun is often tendentious. After 14 Iraqis had been killed in the first marketplace bomb, the Mirror carried a front-page picture of a laughing George W. Bush with the headline 'He Loves It'. Alone among British newspapers, the Sun reported that the unloading of aid from the ship Sir Galahad was 'greeted by ecstatic Iraqis'. Readers of these two newspapers are following an entirely different war.

Most television reports are more balanced, though American channels such as NBC and Fox evidently regard themselves as arms of the Pentagon, while the BBC is apt to turn a setback into a major calamity. But the problem here is not so much preconceived views, It is that the so-called embedded reporters do not know much more about what is going on in the general theatre of war than does a platoon commander. The BBC's Clive Myrie offered us a thrilling, derring-do account of the Royal Marines' recent advance on Basra, but at the end of it all we were not very much the wiser about the general situation. One can see why Alastair Campbell should be worried about the embedded reporters, since he is unable to control them, and they will cheerfully offer a general appraisal from their narrow vantage points of whether or not the war is going well. The challenge for the viewer lies in stitching together these disparate and inevitably incomplete accounts into an overall picture that makes sense of the war. I have been unable to.

Before I retired to bed last night, the perfectly coiffured anchorman on Fox News told us about a radio journalist in Swaziland who had got himself into trouble. Evidently this enterprising young man had been offering first-hand reports from Iraq. But it turned out that he had been operating out of a broom cupboard in Mbabane, the capital. We were not told whether his decision to cover the war in this way was born of his own reluctance to visit the front, or whether the news organisation for which he works had simply lacked the funds to send him there. The anchorman was both incredulous and censorious. It may be a terrible thing to say, bearing in mind the enormous risks which so many brave journalists are taking, but I could not help wondering whether the citizens of Swaziland know much less about this war than the rest of us.