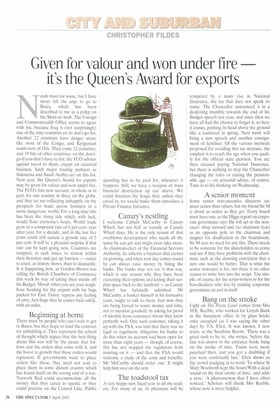 Page 36, 5 April 2003 — Given for valour and won under fire it's the Queen's Award for exports
Close

.-ceds must for some, but I have never felt the urge to go to Basra, which has been described to me as a polyp on the Shatt-al-Arab. The Foreign and Commonwealth Office seems to agree with me, because Iraq is (not surprisingly) one of the nine countries on its don't-go list. Another 22 countries have danger areas, like most of the Congo, and Kyrgyzstan south-west of Osh. Then come 12 countries, and 19 bits of other countries, on the don'tgo-if-you-don't-have-to list: the FCO advises against travel to them, except on essential business. Such major trading partners as Indonesia and Saudi Arabia are on this list. Next year, the Queen's Award for exports may be given for valour and won under fire. The FCC's lists now account, in whole or in part, for one country in three on the globe, and they set me reflecting unhappily on the prospects for trade across frontiers in a more dangerous world. For a long time this has been the rising tide which, with luck, would float everyone's boats. World trade grew at a compound rate of 6 per cent, year after year, for a decade, and in the last five years could still sustain a growth rate of 5 per cent. It will be a pleasant surprise if that rate can be kept going now. Countries are tempted, at such times, to retreat within their frontiers and put up barriers — easier to erect, as history shows, than to dismantle. It is happening now, as Gordon Brown was telling the British Chambers of Commerce this week by way of taking their minds off his Budget. Moral: when you see your neighbour heading for the airport with his bags packed for East Timor, repress any feeling of envy. Just hope that he comes back safely, with an order.

There must be people who can't wait to get to Basra, but they hope to land the contract for rebuilding it. They represent the school of thought which argues that the best thing about this war will be the peace that follows and the orders that come with it, and the boost to growth that these orders would represent. If governments want to place orders like these, they need not wait to place them in some distant country which has found itself on the wrong end of a war, Network Rail could accommodate all the money that they cared to spend, or they could practise on the Central Line. Public spending has to be paid for, wherever it happens. Still, we have a weapon of mass financial destruction up our sleeve. We could threaten the Iraqis that, unless they caved in, we would make them introduce a Private Finance Initiative.

welcome Callum McCarthy to Canary Wharf, but not half as warmly as Canary Wharf does. He is the only tenant of that overblown development who needs all the space he can get and might even take more. As chairman-elect of the Financial Services Authority, he inherits a business that carries on growing, and when rent day comes round he can always raise money by fining the banks. The banks may not see it that way, which is one reason why they have been exercising their options and letting their surplus space back to the landlord — as Canary Wharf has belatedly admitted. Mr McCarthy, a banker himself in his formative years, ought to talk to them, Just now they are being forced to waste money and time, not to mention goodwill, by asking for proof of identity from customers whom they know perfectly well. One such customer, taking it up with the FSA, was told that there was no legal or regulatory obligation for banks to do this when an account had been open for more than eight years — though, of course, this has not stopped the regulators from insisting on it — and that the FSA would welcome a study of the costs and benefits. Mr McCarthy should order one. It might help him save on the rent.

A very happy new fiscal year to all my readers. For many of us, its pleasures will be tempered by a nasty rise in National Insurance, the tax that dare not speak its name. The Chancellor announced it in a deafening mumble towards the end of his Budget speech last year, and since then we have all had the chance to forget it, so here it comes, pushing its head above the ground like a toadstool in spring. Next week will bring a new speech and another consignment of fertiliser. Of the various methods proposed for avoiding this tax increase, the simplest is to reach the age when you qualify for the official state pension. You are then excused paying National Insurance, but there is nothing to stop the Chancellor changing the rules or raising the pensionable age — on actuarial advice, of course. Tune in to his thinking on Wednesday.

Some senior non-executive directors are more senior than others, but my friend Sir M is about as senior as they get. Every board must have one, so the Higgs report on corporate governance says. He will act as the nonexecs' shop steward and (so chairmen fear) as an opposite pole to the chairman and magnet for disaffection in the boardroom. Sir M sees no need for any this. There needs to be someone for the shareholders to come and see if they have problems with the chairman, such as the dawning conviction that a new one would be better. That is what the senior non-exec is for, but there is no other reason to write him into the script. Too simple, of course, for the script-writers or for the box-checkers who live by making corporate governance an end in itself.

Bang on the stroke

Light on The Waste Land comes from Mrs ME. Keeble, who worked for Lloyds Bank in the basement office lit by glass bricks once occupied (as I was saying the other day) by T.S. Eliot. It was known, I now learn, as the Sunshine Room. 'There was a great rush to be in.' she writes, 'before the line was drawn in the entrance book, bang on the stroke of nine. Trains were more punctual then, and you got a drubbing if you were continually late.' Eliot shows us the crowd trudging in to work To where St Mary Woolnoth kept the hours/With a dead sound on the final stroke of nine,' and adds a note: 'A phenomenon that I have often noticed.' Scholars will thank Mrs Keeble, whose note is more helpful.