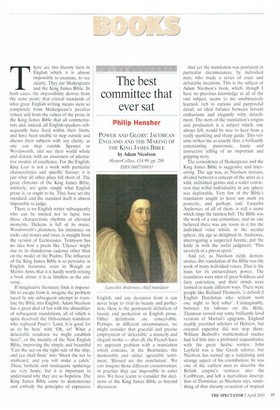 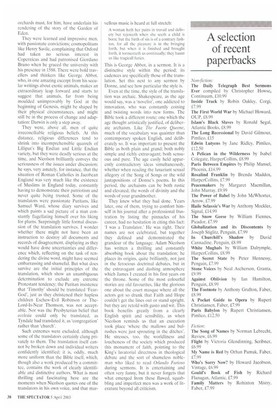 The best committee that ever sat

POWER AND GLORY: JACOBEAN ENGLAND AND THE MAKING OF THE KING JAMES BIBLE by Adam Nicolson HarperCollins, £18.99, pp. 288 ISBN 0007108931 There are two literary facts in English which it is almost impossible to examine, to see clearly. They are Shakespeare and the King James Bible. In both cases, the impossibility derives from the same point; that critical standards of what great English writing means stem so completely from Shakespeare's peculiar virtues and from the values of the prose in the King James Bible that all commentators and, indeed, all English-speakers subsequently have lived within their limits, and have been unable to step outside and discuss their subjects with any clarity, as one can step outside Spenser or Wordsworth, and see their world whole and distant, with an awareness of alternative models of excellence. For the English, King Lear is not a work with particular characteristics and specific flavour; it is just what all other plays fall short of. The great climaxes of the King James Bible, similarly, are quite simply what English prose is, or ought to be. They have set the standard, and the standard itself is almost impossible to judge.

There is no English writer subsequently who can be trusted not to lapse into those characteristic rhythms at elevated moments. Dickens is full of its music. Wordsworth's plainness, his insistence on rocks and stones and trees, is straight from the version of Ecclesiastes. Tennyson has no idea how a poem like 'Ulysses' might rise to its thunderous cadence other than on the model of the Psalms. The influence of the King James Bible is so pervasive in English literature, even in Waugh or Martin Am is, that it is hardly worth writing a book about; it is as limitless as the universe.

If imaginative literature finds it impossible to escape from it, imagine the problem faced by any subsequent attempt to translate the Bible into English. Adam Nicolson has a great deal of fun with the absurdities of subsequent translations, all of which is quite deserved; the 18th-century translator who replaced Peter's 'Lord, it is good for us to be here' with 'Oh, sir! What a delectable residence we might establish here!', or the insanity of the New English Bible, improving the simple and beautiful 'Cast the net on the right side of the ship, and yee shall finde' into 'Shoot the net to starboard, and you will make a catch.' These bathetic and inadequate updatings are very funny, but it is important to understand why they are so hopeless. The King James Bible came to demonstrate and embody the principles of expressive English, and any deviation from it can never hope to rival its beauty and perfection. Here is the permanent definition of beauty and perfection in English prose. Other definitions are conceivable. Perhaps, in different circumstances, we might consider that graceful and precise employment of 'delectable' a masterly and elegant stroke — after all, the French have no apparent problem with a translation which contains, in the Beatitudes, the memorable and rather agreeable sentiment, 'Blessed are the nonchalant', We can imagine those different circumstances; in practice they are impossible to enter into. We have learnt to consider the decisions of the King James Bible as beyond discussion.

And yet the translation was produced in particular circumstances, by individual men, who made a series of exact and debatable decisions. This is the subject of Adam Nicolson's book, which, though I have no previous knowledge at all of the vast subject, seems to me unobtrusively learned, rich in curious and purposeful detail, an ideal balance between fervent enthusiasm and elegantly witty detachment. The story of the translation's origins and production is a subject which, one always felt, would be nice to hear from a really sparkling and sharp guide. This volume strikes me as exactly that, a brilliantly entertaining, passionate, funny and instructive telling of an important and gripping story.

The coincidence of Shakespeare and the King James Bible is suggestive and interesting. The age was, as Nicolson stresses, divided between a concept of the artist as a wild, individual genius and a wider conviction that wilful individuality in any sphere was deplorable. Very few of the Bible's translators sought to leave any mark on posterity, and perhaps only Lancelot Andrewes, of all of them, is still a name which rings the faintest bell. The Bible was the work of a vast committee, and no one believed there was any room in it for the individual voice which, in the secular sphere, the age so delighted in. Andrewes, interrogating a suspected heretic, put the knife in with the awful judgment, 'This savoreth of a p .ryvat spyrit.'

And yet, as Nicolson richly demonstrates, this translation of the Bible was the work of many individual voices. That is the basis for its extraordinary power. The translators were men of great boldness and fiery conviction, and their minds were formed in many different ways. There were people like Richard Thomson, 'a debosh'd English Dutchman who seldom went one night to bed sober'. Unimaginably, between his labours on the Bible, Thomson turned out some brilliantly lewd versions of Martial's epigrams. England readily provided scholars of Hebrew, but oriental expertise did not stop there; William Bedwell's mathematical studies had led him into a profound acquaintance with the great Arabic writers. John Layfield was a fine Greek scholar, but Nicolson has turned up a tantalising and strange aspect of his contribution; he was one of the earliest men to describe the British empire's ventures into the Caribbean, and left a marvellous description of Dominica; as Nicolson says, something of that dreamy evocation of tropical orchards must, for him, have underlain his rendering of the story of the Garden of Eden.

They were learned and impressive men, with passionate convictions; cosmopolitans like Henry Savile, complaining that Oxford had taken no serious interest in Copernicus and had patronised Giordano Bruno when he graced the university with his presence in 1588. There were bold travellers and thinkers like George Abbot, who, in one amazing excerpt from his secular writings about exotic animals, makes an extraordinary leap forward and starts to suggest that animals, far from being moulded unimprovably by God at the beginning of Genesis, might be shaped by their physical circumstances, and might still be in the process of change and adaptation: Darwin is only a step away.

They were, above all, men of quite irreconciliable religious beliefs. At this distance, religious differences tend to shrink into incomprehensible quarrels of Lilliput's Big Endian and Little Endian variety, but they were deadly serious at the time, and Nicolson brilliantly conveys the seriousness of the issues under discussion; he says, very astutely, for instance, that the situation of Roman Catholics in Jacobean England was very much like the existence of Muslims in England today, constantly having to demonstrate their patriotism and never quite being trusted. Some of the translators were passionate Puritans, like Samuel Ward, whose diary survives and which paints a sad picture of a man constantly flagellating himself over his liking for plums. Surprisingly little formal discussion of the translation survives. I wonder whether there might not have been an instruction to destroy all documents and records of disagreement, displaying as they would have done uncertainties and difference which, reflecting on the task of rendering the divine word, might have seemed embarrassing and shameful. But what does survive are the initial principles of the translation, which show an unambiguous determination to exclude any extreme Protestant tendency: the Puritan insistence that 'Timothy should be translated 'FearGod', just as they christened their hapless children Eschew-Evil Robinson or TheLord-Is-Near Thomson, was not acceptable. Nor was the Presbyterian belief that ecclesia could only be translated, as Tyndale had translated it, as 'congregation' rather than 'church'.

Such extremes were excluded, although some of the translators certainly clung privately to them. The translation itself cannot be broken down and individual writers confidently identified; it is, oddly, much more uniform than the Bible itself, which, though also a work produced by a committee, contains the work of clearly identifiable and distinctive authors. What is most thrilling and fascinating here are the moments when Nicolson quotes one of the translators in his own voice, and that mar

A woman haat her pains in travail and delivery but rejoiceth when she seeth a child is horn; but the birth of sin is of a contrary fashion, for all the pleasure is in the bringing forth, hut when it is finished and brought forth, it tormenteth us continually; they haunt us like traeicall furies.

This is George Abbot, in a sermon. It is a distinctive style within the period; its cadences are specifically those of the translation. Set this next to any sermon by Donne, and see how particular the style is.

Even at the time, the style of the translation was archaic. Shakespeare, as the age would say, was a 'novelist', one addicted to innovation, who was constantly coining and twisting words into new forms. The Bible took a different route; one which the age thought artistically justified, of deliberate archaism. Like The Faerie Queene, much of the vocabulary was quainter than contemporary spoken English, and deliberately so. It was important to present the Bible as both plain and grand: both nobly simple and richly extravagant; both sensuous and pure. The age easily held apparently contradictory ideas simultaneously, whether when reading the luxuriant sexual allegory of the Song of Songs or the wild juxtapositions of Donne's poems. In this period, the archaisms can be both rustic and elevated; the words of divinity and the words of your grandmother.

They knew what they had done. Years later, one of them, trying to comfort himself in his journal after a professional frustration by listing the pinnacles of his career, had no hesitation in citing this fact: was a Translator.' He was right. Their names are not celebrated, but together they defined and demonstrated the grandeur of the language. Adam Nicolson has written a thrilling and constantly absorbing book about the translation; he places its origins, quite brilliantly, not just in the ferocious doctrinal debates, but in the extravagant and dashing atmosphere which James I created in his first years on the throne. Some of the most colourful stories are old favourites, like the glorious one about the court masque where all the actors got so drunk that Faith and Hope couldn't get the lines out or stand upright, but they are retold with gusto and wit. This book benefits greatly from a clearly English spirit and sensibility, as when Nicolson reminds us that an execution took place 'where the mallows and bulrushes were just sprouting in the ditches'. He stresses, too, the worldliness and loucheness of the society which produced this monument of faith, pointing to the King's lavatorial directness in theological debate and the sort of shameless nobleman who liked to read Orlando Furioso during sermons. It is entertaining and often very funny, but it never forgets that what emerged from these flawed, squabbling and imperfect men was a work of literature beyond all criticism.