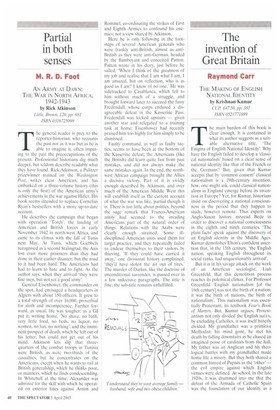 Partial in both senses

AN ARMY AT DAWN: THE WAR IN NORTH AFRICA,

by Rick Atkinson Little, Brown, £20, pp. 681 ISBN 0316725099 The general reader is prey to the reporter-historian, who recounts the past not as it was but as he is able to imagine it, often imputing to the past the preoccupations of the present. Professional historians dig much deeper, but seldom describe readably what they have found. Rick Atkinson, a Pulitzer prizewinner trained on the Washington Post, writes clear American, and has embarked on a three-volume history (this is only the first) of the American army's achievements in the war against Hitler. His book seems intended to replace Cornelius Ryan's bestsellers with a more up-to-date account.

He describes the campaign that began with operation 'Torch', the landing of American and British forces in early November 1942 in north-west Africa, and came to its climax with the fall of Tunis next May. At Tunis, which Goebbels recognised as a second Stalingrad, the Axis lost even more prisoners than they had done in their earlier disaster; but the road to it had been hard. The Americans had had to learn to hate and to fight. As the author says, when they arrived 'they were fine men, but not yet a good army'.

General Eisenhower, the commander on the spot, had envisaged a headquarters in Algiers with about 150 officers. It grew to a total strength of over 16,000, proverbial for sloth and incompetence. Farther forward, as usual, life was tougher: as a GI put it, writing home, 'No shave, no bath, very little food, no beds, no liquor, no women, no fun, no nothing', and the imminent prospect of death, which he left out of his letter, but could not get out of his mind. Atkinson lets slip that threequarters of the combat troops in Tunisia were British, as were two-thirds of the casualties, but he concentrates on the Americans, except when he wants to rail at British generalship, which he thinks poor, or manners, which he finds condescending. In Whitehall at the time, Alexander was admired for the skill with which he operated on exterior lines against Arnim and

Rommel, co-ordinating the strikes of First and Eighth Armies to confound his enemies; not a view shared by Atkinson.

Here he is only following in the footsteps of several American generals who were frankly anti-British, almost as antiBritish as they were anti-German, headed by the flamboyant and conceited Patton. Patton wrote in his diary, just before he sailed, 'When I think of the greatness of my job and realise that I am what I am, I am amazed, but on reflection, who is as good as I am? I know of no one.' He was sidetracked to Casablanca, which fell to him without much of a struggle, and brought forward later to succeed the fussy Fredendall, whose corps endured a disagreeable defeat in the Kasserine Pass. Fredendall was kicked upstairs — given another star and relegated to a training task at home; Eisenhower had recently praised him too highly for him simply to be dismissed.

Faulty command, as well as faulty tactics, seems to have been at the bottom of the Kasserine defeat; the Americans (like the British) did learn quite fast from past mistakes, and did not always make the same mistakes again. In the end, the northwest African campaign brought the Allies a decisive victory. Part of it is vividly enough described by Atkinson, and over much of the American Middle West this will establish itself as the current account of what the war was like, partial though it is. There is too little about politics, beyond the sage remark that Franco-American amity had seemed to the invading Americans part of the natural order of things. Relations with the Arabs were clearly enough strained. Some illdisciplined American units used them for target practice, and they repeatedly failed to endear themselves to their visitors by thieving. 'If they could have carried it away,' one divisional history complained, 'they'd have stolen the air out of tires.' The murder of DarIan, like the doctrine of unconditional surrender, is passed over in a few indecisive paragraphs. The title is fine; the sub-title remains unfulfilled.