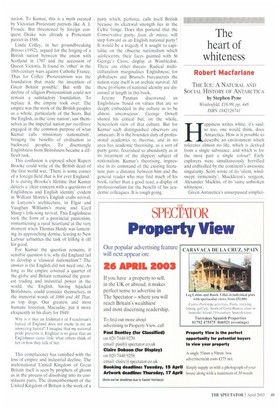 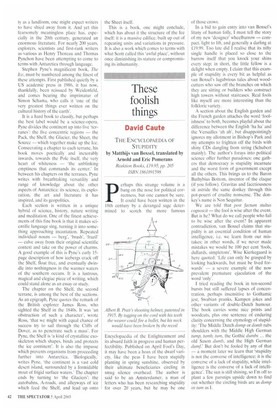 The heart of whiteness

Happiness writes white, it's said: so too, one would think, does Antarctica. How is it possible to describe an environment which tolerates almost no life, which is derived from a single substance, and which is for the most part a single colour? Early explorers were simultaneously horrified and enthralled by the continent's awesome singularity. Scott wrote of its 'silent, windswept immensity'; Shackle ton's surgeon, Alexander Macklin, of its 'same unbroken whiteness'.

Given Antarctica's unsurpassed simplici ty as a landform, one might expect writers to have shied away from it. And yet this fearsomely meaningless place has, especially in the 20th century, generated an enormous literature. For nearly 200 years, explorers, scientists and first-rank writers as various as Henry Thoreau and Thomas Pynchon have been attempting to come to terms with Antarctica through language.

Stephen Pyne's magnificent book, The Ice, must be numbered among the finest of these attempts. First published quietly by a US academic press in 1986, it has now, thankfully, been reissued by Weidenfeld, and comes bearing the imprimatur of Simon Schama, who calls it one of the very greatest things ever written on the cultural history of the earth'.

It is a hard book to classify, but perhaps the best label would be a science-opera. Pyne divides the continent up into five 'terranes': the five concentric regions — the Pack, the Shelf. the Glacier, the Sheet, the Source — which together make up the Ice. Consecrating a chapter to each terrane, his book moves poetically and inexorably inwards, towards the Pole itself, the very heart of whiteness — 'the unblinking emptiness that commands its center.' In between his chapters on the terranes, Pyne writes with breathtaking versatility and range of knowledge about the other aspects of Antarctica: its science, its exploration, the art and literature it has inspired, and its geopolitics.

Each section is written in a unique hybrid of science, history, nature writing and meditation. One of the finest achievements of this fine book is that it makes scientific language sing, turning it into something approaching incantation. Repeated individual nouns — berg', 'brash', `frazil' — calve away from their original scientific context and take on the power of charms. A good example of this is Pyne's early 15page description of how icebergs crack off the Shelf, float free, and eventually dwindle into nothingness in the warmer waters of the southern oceans. It is a lustrous, magical and elegiac piece of writing, which could stand alone as an essay or study.

The chapter on the Shelf, the second terrane, is among the best of the sections. As an epigraph, Pyne quotes the remark of the British explorer James Ross, who sighted the Shelf in the 1840s. It was 'an obstruction of such a character', wrote Ross, that we might with equal chance of success try to sail through the Cliffs of Dover, as to penetrate such a mass'. For Pyne, the Shelf is 'a kind of crystalline exoskeleton which shapes, binds and protects the ice continent'. It is also the impasse which prevents organisms from proceeding further into Antarctica. 'Biologically,' writes Pyne, the continent is a vast cold desert island, surrounded by a formidable moat of frigid surface waters.' The chapter ends by turning to 'the Glaciers': the autobahns, A-roads, and alleyways of ice which feed the Shelf, and lead up onto the Sheet itself.

This is a book, one might conclude, which has about it the structure of the Ice itself: it is a massive edifice, built up out of repeating units and variations in pressure. It is also a work which comes to terms with what Scott called this 'awful place', without once diminishing its stature or compromising its inhumanity.