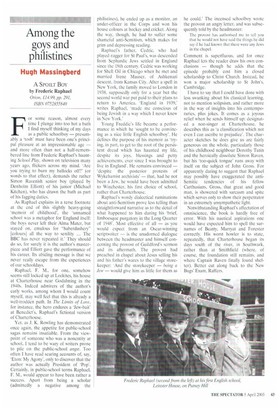 Among the goys and philistines

For some reason, almost every time I plunge into too hot a bath I find myself thinking of my days as a public schoolboy — presumably a 'tosh' must have been one's principal pleasure at an impressionable age — and more often than not a half-remembered line from Frederic Raphael's haunting School Play. shown on television many years ago, flickers across my mind. 'Are you trying to burn my ballocks off?' (or words to that effect), demands the rather Simon Ravenish senior boy (played by Denholm Elliott) of his junior (Michael Kitchen), who has drawn the bath as part of his fagging duties.

As Raphael explains in a terse footnote at the end of this slightly heavy-going 'memoir of childhood'. the 'unnamed school was a metaphor for England itself: the boys never left their Alma Mater, but stayed on, emulous for "haberdashery" [colours] all the way to senility ... The BBC has never repeated it.' They should do so, for surely it is the author's masterpiece and Elliott gave the performance of his career. Its abiding message is that we never really escape from the experiences of our schooldays.

Raphael, F. M., for one, somehow seems still locked up at Lockites, his house at Charterhouse near Godalming in the 1940s. Indeed admirers of the author's early works, among whom I would count myself, may well feel that this is already a well-trodden path. In The Limits of Love, for instance, the hero endures a `Jew-bait' at Benedict's. Raphael's fictional version of Charterhouse.

Yet, as J. K. Rowling has demonstrated once again, the appetite for public-school sagas remains insatiable. From the viewpoint of someone who was a nonentity at school, I tend to be wary of writers prone to pile on the public-school angst. Too often I have read searing accounts of, say, 'Eton: My Agony', only to discover that the author was actually President of 'Pop'. Certainly, in public-school terms Raphael, F. M., would appear to have been rather a success. Apart from being a scholar (admittedly a negative among the philistines), he ended up as a monitor, an under-officer in the Corps and won his house colours at hockey and cricket. Along the way, though, he had to suffer some shameful anti-Semitism, which makes for grim and depressing reading.

Raphael's father, Cedric, who had played rugger for St Paul's, was descended from Sephardic Jews settled in England since the 18th century. Cedric was working for Shell Oil in Chicago when he met and married Irene Mauser, of Ashkenazi descent, from Kansas City. After a spell in New York, the family moved to London in 1938, supposedly only for a year but the second world war put paid to their plans to return to America. 'England in I939,' writes Raphael, 'made roe conscious of being Jewish in a way which I never knew in New York.'

Young Freddie's life became a performance in which he 'sought to be convincing as a nice little English schoolboy'. He defines the purpose of his memoir as 'trying, in part, to get to the root of the persistent dread which has haunted my life, despite its joys, blessings and petty achievements, ever since I was brought to live in England'. He remains convinced — 'despite the posterior protests of Wykehamist archivists' — that, had he not been a Jew, he would have been admitted to Winchester, his first choice of school, rather than Charterhouse.

Raphael's wordy dialectical ruminations about anti-Semitism prove less telling than straightforward narrative as to the detail of what happened to him during his 'brief, limboesque purgatory in the Long Quarter of 1948'. Most effective of all — as you would expect from an Oscar-winning scriptwriter — is the unadorned dialogue between the headmaster and himself concerning the provost of Guildford's sermon and its aftermath. The provost had preached in chapel about Jesus selling his and his father's wares to the village storekeeper: 'And the storekeeper — being a Jew — would give him as little for them as he could.' The incensed schoolboy wrote the provost an angry letter, and was subsequently told by the headmaster:

The provost has authorised me to tell you that he would not have said the things he did say if he had known that there were any Jews in the chapel.

Comment is superfluous, and for once Raphael lets the reader draw his own conclusions — though he adds that the episode probably cost him a closed scholarship to Christ Church. Instead, he won a major scholarship to St John's, Cambridge.

I have to say that I could have done with less swanking about his classical learning, not to mention solipsism, and rather more in the way of insights into his contemporaries, plus jokes. It comes as a joyous relief when he sends himself up: designated a non-singer at Charterhouse, he describes this as 'a classification which not even I can ascribe to prejudice'. The character sketches he does give us are fairly generous on the whole, particularly those of his childhood neighbour Dorothy Tutin and the heroically dissolute Simon Raven, but his 'too-quick tongue' runs away with itself on the subject of John Gross. For apparently daring to suggest that Raphael may possibly have exaggerated the antiSemitic tendencies of his fellow Carthusians, Gross, that great and good man, is showered with sarcasm and spite which serves only to show their perpetrator in an extremely unsympathetic light.

Notwithstanding Raphael's affectation of omniscience, the book is hardly free of error. With his nautical aspirations one would have expected him to spell the surnames of Beatty, Marryat and Forester correctly. His worst howler is to state, repeatedly, that Charterhouse began its days south of the river, in Southwark, rather than at Smithfield (where, of course, the foundation still remains, and where Captain Raven finally found shelter). Better cut along back to the New Bugs' Exam, Raffers.