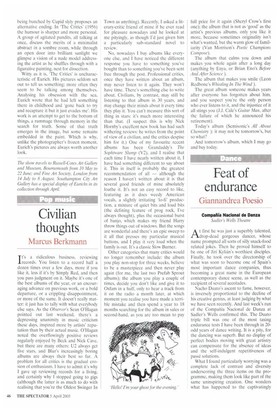 It's a ridiculous business, reviewing records. You listen to a record half a dozen times over a few days, more if you like it, less if it's by Simply Red, and then you pass judgment on it. Maybe it's one of the best albums of the year, or an encouraging advance on previous work, or a bold departure, or a crippling disappointment, or more of the same. It doesn't really matter: it just has to tally with what everybody else says. As the Observer's Sean O'Hagan pointed out last weekend, there's a depressing unanimity in music criticism these days, inspired more by artists' reputation than by their actual music. O'Hagan noted the overflowingly positive reviews regularly enjoyed by Beck and Nick Cave, but there are many others: U2 always get five stars, and Blur's increasingly boring albums are always their best so far. A problem for all critics is the gradual erosion of enthusiasm. I have to admit it's why I gave up reviewing records for a living, and certainly why I stopped going to gigs (although the latter is as much to do with realising that you're the Oldest Swinger In

Town as anything). Recently, I asked a literary-critic friend of mine if he ever read for pleasure nowadays and he looked at me pityingly, as though I'd just given him a particularly sub-standard novel to review.

No, nowadays I buy albums like everyone else, and I have noticed the different response you have to something you've bought than to something you've been sent free through the post. Professional critics, once they have written about an album, may never listen to it again. They won't have time. There's something else to write about. Civilians, by contrast, may still be listening to that album in 30 years, and may change their minds about it every time they play it. You can't measure this sort of thing in stars: it's much more interesting than that. (I suspect this is why Nick Hornby's excellent new book has had such withering reviews: he writes from the point of view of a civilian, and the critics despise him for it.) One of my favourite recent albums has been Grandaddy's The Sophtware Slump (V2), and I realise that each time I have nearly written about it, have had something different to say about it. This in itself is probably the greatest recommendation of all — although the reason I haven't written about it is that several good friends of mine absolutely loathe it. It's not an easy record to like, featuring as it does weedy American vocals, a slightly irritating lo-fl production, a mixture of quiet bits and loud bits (the defining feature of prog rock, I've always thought), plus the occasional burst of banjo, which makes my friend Harry throw things out of windows. But the songs are wonderful and there's an epic sweep to it all that presses my particular musical buttons, and I play it very loud when the family is out. It's a classic Slow Burner.

Other categories that many critics would no longer remember include: the album you play non-stop for three weeks, believe to be a masterpiece and then never play again (for me, the last two Prefab Sprout albums); the album you play a couple of times, decide you don't like and give it to Oxfam in a huff, only to hear a track from it on the radio a month later, at which moment you realise you have made a terrible mistake and then spend a year to 18 months searching for the album in sales or second-hand, as you are too mean to pay full price for it again (Sheryl Crow's first one); the album that is not as 'good' as the artist's previous albums, only you like it more, because sometimes originality isn't what's wanted, but the warm glow of familiarity (Van Morrison's Poetic Champions Compose).

The album that calms you down and makes you whole again after a long day (anything by Enya. or Brian Eno's Before And After Science ).

The album that makes you smile (Leon Redhone's Whistling In The Wind).

The great album someone makes years after everyone has forgotten about him, and you suspect you're the only person who ever listens to it, and the injustice of it all stings you (J.J. Cale's Guitar Man, after the failure of which he announced his retirement).

Today's album (Semisonic's All About Chemistry): it may not be tomorrow's, but so what?

And tomorrow's album, which I may go and buy today.