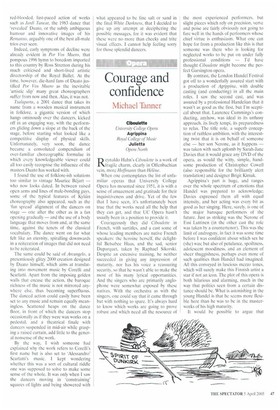 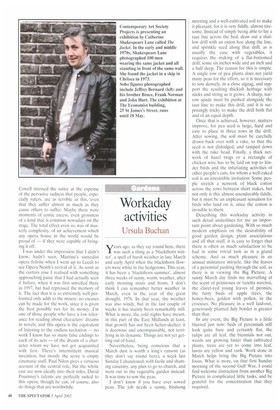 When one contemplates the list of unfamiliar operas that University College Opera has mounted since 1951, it is with a sense of amazement and gratitude for their inquisitiveness and drive. Yet of the few that I have seen, it's unfortunately been true that the works need all the help that they can get, and that UC Opera hasn't usually been in a position to provide it.

Courageously they did Ciboulette in French, with surtitles, and a cast some of whose leading members are native French speakers: the heroine herself, the delightful Betsabee Haas, and the sad, senior Duparquet, taken by Raphael Sikorski. Despite an extensive training, he neither succeeded in giving any impression of maturity, nor has his voice a reassuring security, so that he wasn't able to make the most of his many lyrical opportunities. And the singers who are primarily anglophone were somewhat exposed by these natives. With the orchestra as with the singers. one could say that it came through but with nothing to spare. It's always hard to know which works are going to prove robust and which need all the resource of the most experienced performers, but slight pieces which rely on precision, verve and poise are fairly obviously not going to fare well in the hands of performers whose chief virtue is enthusiasm. What one can hope for from a production like this is that someone was there who is looking for neglected works to be put on under fully professional conditions — I'd have thought Ciboulette might become the perfect Garsington opera.

By contrast, the London Handel Festival got off to a wonderfully assured start with a production of Agrippina, with double casting (and conducting) in all the main roles, I saw the second cast, and was assured by a professional Handelian that it wasn't as good as the first, but I'm sceptical about that. Laurence Cummings's conducting, anyhow, was ideal in its unfussy approach, its lively tempi, its preparedness to relax. The title role, a superb conception of ruthless ambition, with the interesting twist that it is on behalf of someone else — her son Nerone, as it happens — was taken with such aplomb by Sarah-Jane Davies that it would grace any DVD of the opera, as would the witty, simple, handsome production of Christopher Cowell (also responsible for the brilliantly alert translation) and designer Brigit Kimak.

Agrippina's part is huge, and ranges over the whole spectrum of emotions that Handel was prepared to acknowledge; Davies expressed them all with equal intensity, and her acting was every bit as good as her singing. Here, surely, is one of the major baroque performers of the future. Just as striking was the Nerone of F,ssi Luttinen (in the other cast the role was taken by a countertenor). This was the limit of androgyny, in fact it was some time before I was confident about which sex he (she) was; but also of petulance, spoiltness, adolescent moodiness, and an element of sheer thuggishness, perhaps even more of such qualities than Handel had imagined. All this conveyed in luscious mezzo tones, which will surely make this Finnish artist a star if not an icon. The plot of this opera is both hilarious and alarming, much in the way that politics seen from a certain distance should be. What is astonishing in the young Handel is that he seems more flexible here than he was to be in the masterworks of his high maturity.

It would be possible to argue that Cowell stressed the satire at the expense of the pervasive sadness that people, especially rulers, are as terrible as this, even that they suffer almost as much as they cause others to suffer. Maybe there were moments of comic excess, even grossness of a kind that is common nowadays on the stage. The total effect even so, was of masterly complexity, of an achievement which any opera house in the world would be proud of — if they were capable of bringing it off.

I was under the impression that I didn't know, hadn't seen, Martinu's surrealist opera Julien when I went up to Leeds to see Opera North's revival of it. As soon as the curtain rose I realised with something approaching panic that I had actually seen it before, when it was first unveiled there in 1997, but had repressed the memory of it. The fact that it is so extremely well performed only adds to the misery: no excuses can be made for the work, since it is given the best possible run for its money. I'm one of those people who have a low tolerance for reading about characters' dreams in novels, and this opera is the equivalent of listening to the endless recitation no work I know has so many false endings to each of its acts — of the dream of a character whom we have not got acquainted with first. There's intermittent musical invention, but mostly the score is empty cinematic stuff. Paul Nilon gives a virtuoso account of the central role, but the whole cast are now ideally into their roles. David Pountney's talents are perfectly suited to this opera, though he can, of course, also do things that are worthwhile.