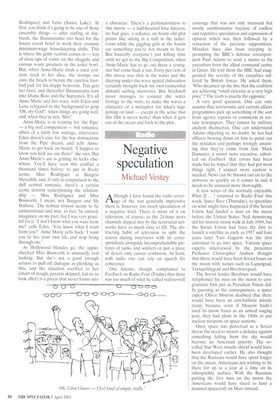 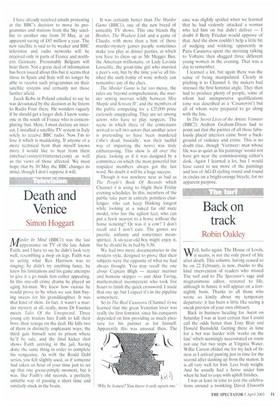 Al:hough I have found the radio coverge of the war generally impressive there is, however, too much speculation of a negative kind. There is more of it on television, of course, as the 24-hour news channels dipped into by the terrestrial networks have so much time to fill. The distracting habit of television to split the screen during interviews with its correspondents alongside incomprehensible pictures of tanks and soldiers or just a piece of desert only causes confusion. At least, with radio one can rely on speech for coherence.

One listener, though, complained to Feedback on Radio Four (Friday) that there was too much of what he called wall-to-wall coverage that was not only incessant but mostly uninformative because of endless and repetitive speculation and expression of opinion which was then followed by a retraction of the previous suppositions. Mistakes have also been creeping in, prompting the BBC's defence correspondent Paul Adams to send a memo to his executives from the allied command centre in Qatar. He told them the BBC had exaggerated the severity of the casualties suffered by British forces. He asked them, 'Who dreamed up the line that the coalition are achieving "small victories at a very high price"? The truth is exactly the opposite.'

A very good question. One can only assume that newsrooms and current affairs programmes pick up something of the sort from agency reports or comments in certain newspapers. They cannot be military analysts themselves. One can understand Adams objecting as, no doubt, he has had officers bearing down on him to point out the mistakes and perhaps wrongly assuming that they've come from him. Mark Damazer, a senior news executive, admitted on Feedback that errors had been made but he hoped that they had got most things right. I suspect more caution is needed. News can be thrown out on to the airwaves as quickly as it comes in and it needs to be assessed more thoroughly.

A new series of the normally enjoyable What If.. ? returned to Radio Four this week, Space Race (Thursday), to speculate on what might have happened if the Soviet Union had landed a man on the moon before the United States. Neil Armstrong did his historic moon walk in July 1969, but the Soviet Union had been the first to launch a satellite as early as 1957 and four years later Yuri Gagarin was the first astronaut to go into space. Various space experts interviewed by the presenter Professor Christopher Andrew thought that there would have been Soviet bases on the moon with names such as Lunargrad, Tranquilitygrad and Brezhnevgrad.

The Soviet leader Brezhnev would have telephoned his man on the moon to congratulate him just as President Nixon did. In guessing at the consequences, a space expert Oliver Morton doubted that there would have been an anti-ballistic missile treaty because, even if Moscow hadn't used its moon bases as an armed staging post, they had plans in the 1960s to put nuclear weapons on space stations.

Once space was perceived as a Soviet threat the need to mount a defence against something falling from the sky would become an American priority. The socalled Star Wars missile shield would have been developed earlier. He also thought that the Russians would have spent longer on the moon, Americans not wishing to be there for up to a year at a time on its inhospitable surface. With the Russians putting the first man on the moon the Americans would have raced to land a manned spacecraft on Mars instead. I have already received emails protesting at the BBC's decision to move its programmes and stations from the Sky satellite to another one from 30 May, at an apparent saving of £85 million a year. The new satellite is said to be weaker and BBC television and radio networks will be received only in parts of France and northern Germany. Presumably Belgium will hear them. Not a great deal of information has been issued about this but it seems that those in Spain and Italy will no longer be able to receive such programmes on their satellite systems and certainly not those further afield.

Jacek Koba in Poland emailed to say he was devastated by the decision as he listens to Radio Four there. He wonders vaguely if he should get a larger dish. I know someone in the south of France who is contemplating that. Here, I must declare an interest. I installed a satellite TV system in Italy solely to receive BBC radio. Now I'm to lose it which is maddening. If anyone of a more technical bent than myself knows more I would like to hear from them (michael.vestey@btinternet.com) as well as the views of those affected. We must hope that by 30 May the BBC changes its mind, though I don't suppose it will.