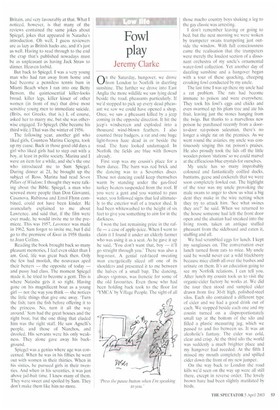 Qn the Saturday, hungover, we drove from London to Norfolk in dazzling sunshine. The further we drove into East Anglia the more wildlife we saw lying dead beside the road, pheasants particularly. If we'd stopped to pick up every dead pheasant we saw we could have opened a shop. Once, we saw a pheasant killed by a jeep coming in the opposite direction. It hit the jeep's windscreen and exploded into a thousand wind-blown feathers. I also counted three badgers, a rat and one huge light-brown hare dead in or beside the road. The hare looked undamaged. In Norfolk the fields are blue with flowers already.

First stop was my cousin's place for a barn dance. The barn was red brick and the dancing was to a Seventies disco. Those not dancing could keep themselves warm by standing under the gas-fired turkey heaters suspended from the roof. If you were a gent and you wanted to pass water, you followed signs that led ultimately to the exterior wall of a tractor shed. It had been whitewashed to the height of six feet to give you something to aim for in the darkness.

won the last remaining prize in the raffle — a case of apple-juice. When I went to claim it I found it under an elderly farmer who was using it as a seat. As he gave it up he said, 'You don't want that, boy — it'll go straight through you.' There was also a hog-roast. A genial red-faced sweating man energetically sliced off one of its shoulders and presented it to me between the halves of a small bap. The dancing, always vigorous, was frenetic for some of the old favourites. Even those who had been holding back took to the floor for 'YMCA' by Village People. The sight of all those macho country boys shaking a leg to the gay classic was arresting.

I don't remember leaving or going to bed, but the next morning we were woken by trumpeter swans trumpeting just outside the window. With full consciousness came the realisation that the trumpeters were merely the loudest section of a dissonant orchestra of my uncle's ornamental water-fowl collection. Yet another day of dazzling sunshine and a hangover began with a tour of these quacking, cheeping croaking fowl conducted by my uncle.

The last time I was up there my uncle had a rat problem. The rats had become immune to poison and were everywhere. They took his fowl's eggs and chicks and even swarmed up his plum tree and ate his fruit, leaving just the stones hanging from the twigs. But thanks to a marvellous new poison he purchased recently from a doorto-door rat-poison salesman, there's no longer a single rat on the premises. As we went round the aviaries, my uncle was continuously singing this rat poison's praises. He also proudly took the lids off the little wooden poison 'stations' so we could marvel at the efficacious blue crystals for ourselves.

My uncle has so many improbably coloured and fantastically coiffed ducks, bantams, geese and cockerels that we were soon completely fowled out. The highlight of the tour was my uncle provoking the male swans to anger to show us what a big dent they make in the wire netting when they try to attack him. 'See what swines they are?' he said. When we returned to the house someone had left the front door open and the alsatian had sneaked into the living room, taken an antique stuffed pheasant from the sideboard and eaten it, stuffing and all.

We had scrambled eggs for lunch. I kept my sunglasses on. The conversation over lunch turned from rats to mice, My uncle said he would never eat a wild blackberry because mice climb all over the bushes and urinate on them. It's an education going to see my Norfolk relations, I can tell you. After lunch my cousin took us to visit the organic-cider factory he works at. We did the tour then stood and sampled cider drawn from five 30-ft high, polished-steel silos. Each silo contained a different type of cider and we had a good drink out of each. We stopped beside each one and my cousin turned on a disproportionately small tap at the bottom of the silo and filled a plastic measuring jug, which we passed to and fro between us. It was an alcoholic's fantasy. The cider was cold, clear and crisp. At the third silo the world was suddenly a much brighter place and my hangover had receded. At the fifth I missed my mouth completely and spilled cider down the front of my new jumper.

On the way back to London the road kills we'd seen on the way up were all still there, except in reverse order. The lovely brown hare had been slightly mutilated by birds,