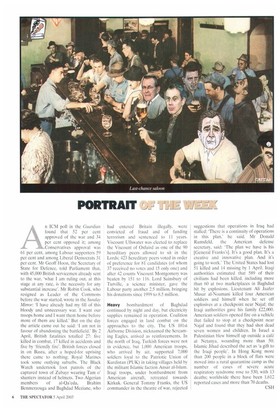 A n ICM poll in the Guardian found that 52 per

cent approved of the war and 34 per cent opposed it; among Conservatives approval was 61 per cent, among Labour supporters 59 per cent and among Liberal Democrats 31 per cent. Mr Geoff Hoon, the Secretary of State for Defence, told Parliament that, with 45,000 British servicemen already sent to the war, 'what I am ruling out, at this stage at any rate, is the necessity for any substantial increase', Mr Robin Cook, who resigned as Leader of the Commons before the war started, wrote in the Sunday Mirror: 'I have already had my fill of this bloody and unnecessary war. I want our troops home and I want them home before more of them are killed.' But on the day the article came out he said: 'I am not in favour of abandoning the battlefield.' By 2 April, British fatalities totalled 27: five killed in combat, 17 killed in accidents and five by 'friendly fire'. British forces closed in on Basra, after a hoped-for uprising there came to nothing; Royal Marines took some outlying suburbs. The Black Watch undertook foot patrols of the captured town of Zubayr wearing Tam o' shutters instead of helmets. Two Algerian members of al-Qa'eda, Brahim Benmerzouga and Baghdad Meziane. who

had entered Britain illegally, were convicted of fraud and of funding terrorism and sentenced to 11 years. Viscount Ullswater was elected to replace the Viscount of Oxfuird as one of the 90 hereditary peers allowed to sit in the Lords; 423 hereditary peers voted in order of preference for 81 candidates (of whom 37 received no votes and 15 only one) and after 42 counts Viscount Montgomery was beaten by 151 to 116. Lord Sainsbury of Turville, a science minister, gave the Labour party another 2.5 million, bringing his donations since 1999 to 8.5 million.

Heavy bombardment of Baghdad continued by night and day, but electricity supplies remained in operation. Coalition forces engaged in land combat on the approaches to the city. The US 101st Airborne Division, nicknamed the Screaming Eagles, arrived as reinforcements. In the north of Iraq, Turkish forces were not in evidence, but 1,000 American troops, who arrived by air, supported 7,000 soldiers loyal to the Patriotic Union of Kurdistan (PUK) in taking villages held by the militant Islamic faction Arisar al-Islam. Iraqi troops, under bombardment from American aircraft, retreated towards Kirkuk. General Tommy Franks, the US commander in the theatre of war, rejected

suggestions that operations in Iraq had stalled: 'There is a continuity of operations in this plan,' he said. Mr Donald Rumsfeld, the American defense secretary, said: 'The plan we have is his [General Franks's]. It's a good plan. It's a creative and innovative plan. And it's going to work.' The United States had lost 51 killed and 14 missing by 1 April. Iraqi authorities estimated that 589 of their civilians had been killed, including more than 60 at two marketplaces in Baghdad hit by explosions. Lieutenant Ali Jaafer Musar al-Noamani killed four American soldiers and himself when he set off explosives at a checkpoint near Najaf; the Iraqi authorities gave his family £22,000. American soldiers opened fire on a vehicle that failed to stop at a checkpoint near Najaf and found that they had shot dead seven women and children. In Israel a Palestinian blew himself up outside a café at Netanya, wounding more than 50; Islamic Jihad described the act as 'a gift to the Iraqi people'. In Hong Kong more than 200 people in a block of flats were moved into a rural quarantine camp as the number of cases of severe acute respiratory syndrome rose to 530, with 13 deaths; worldwide there have been 1,612 reported cases and more than 70 deaths.